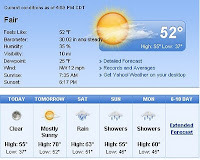 I've said this before, but fall is my favorite time to ride. The weather is usually pretty predictable in Minnesota, unlike spring. So, I can count on knowing what to wear and what to expect when I hit the road. It's cool enough to need gear and warm enough to be comfortable without all the bulky underlayers that I'll be packing on in a month or so. Tires still start the ride warm enough to have some grip.

But the best part is, for some reason, the motorcycle seems to be a whole lot happier to be working in cool weather. I don't mean that my trusty V-Strom minds the heat, but the engine just feels more alive on a cool fall morning. The throttle seems to be directly connected to the rear tire. It's probably an illusion, but it's one I like.

Sev, the MMM editor, had me all primed, this weekend, to get to ride a new Triumph (2011 Sprint GT) or Ducati (2011 Monster 796) for a review. He let me down, though. Apparently, there are better suited folks than me on tap to ride those two cool bikes. I'll probably get first dibs on the next Hyosung POS. No competition for reviews on that sort of ride.

Honestly, I have mixed emotions about test riding motorcycles. There is a nasty statistic that claims that a substantial number of motorcycle crashes occur on borrowed or new motorcycles. I can believe that. Getting used to a new ride takes some time. If I had my druthers, I'd druther test ride on a closed track. At least, I'd rather put a few dozen miles on a new bike on that closed course before I venture out into the vicious and nutty world of cagers and truckers.

Since a Triumph or Ducati isn't in the works for me, I'm going to make some miles in Wisconsin this weekend. On my V-Strom. By myself. I love this weather, so I'm not complaining.
Posted by T.W. Day at Thursday, October 21, 2010