Scotty couldn't catch a break. He got tangled up in office politics and ended up laid off during of one of the worst economic periods in seventy years. Out of work and with the usual expenses knocking on the door, he still wanted to take a long motorcycle trip in 2008. It wasn't looking good for him, one week from the day we were planning to leave town. It would get worse.

In 2007, after I got back from Alaska, Scotty got the bike bug. He asked what I thought would be a good bike for commuting from Hudson to downtown St. Paul and I gave him a short list of my recommendations. He started shopping and found what looked like a good deal from an old biker in Wabasha. It was a 1992 Yamaha TDM, one of my all time favorite motorcycles, with low miles and in mediocre condition. We drove down to look at the bike and found it was moderately beat up, but ran, and seemed to be in neglected but reasonable condition for the asking price. Scott bought it and rode it home, struggling with carburetor problems that caused the bike to run insanely lean below 3,000 rpm and worrying about brittle and bald tires.

He cleaned it up and started working on the carb problems right away. After taking the bike apart a dozen times, wrestling with the overly complicated carburetion that was always a hassle on that generation of motorcycles, Scotty gave up and took the bike to a "reputable" Minneapolis independent repair shop to get the last of the tuning problems tweaked into shape. The three-day turn around he'd been promised by the shop turned into three weeks. When he got the bike back, the original $300 estimate had turned into an $800 repair bill, but the bike ran and he was happy.

At least, he was happy until he tried to do some minor work on the bike and discovered the shop had stripped the mounting bolts to his fuel petcock, lost some fairing screws, and done assorted damage that took him a few more hours to sort out. When he called the shop to complain, they admitted to having set a rookie tech loose on Scotty's bike, apologized, offered to "make it right," and asked him to submit a copy of the invoices he'd collected in fixing the stuff they'd screwed up. When he arrived with the list, he was blown off by the shop owner and ended up with a reimbursement offer that was more insult than compensation. A few hundred miles later, the bike was back running as badly as ever. The shop's "fix" was expensive and temporary.

Scotty kept plugging away at the obstacles to his making the trip, though. He found freelance work and filed for unemployment to make up for the lost job. He got involved in starting an on-line school teaching the stuff he'd been teaching at the college. He kept working on the bike and his travel gear, fine tuning both into something he felt confident in traveling with into the "wilderness" of eastern Canada.

Three weeks before the launch date, we made a backroad trip to Duluth where Scotty picked up some extra gear at RiderWearhouse and we put on a few hundred miles finding out how we'd travel together. On the way back, we took a side trip through Jay Cooke State Park and Scotty lost control of the TDM in the first of a pair of quick turns. He crashed, softly, in the gravel beside the road, avoiding a trip into a gully but doing some minor damage to the bike. He put on such a good demonstration going down in his riding gear that a lid-less cruiser rider traveling in the opposite direction vowed he'd be buying a helmet as soon as he got home. Scotty was in pretty good shape, until he swung back on the bike and hyper-extended his left knee. All the way home, he worried about the knee and he was right to worry. By the time he got home, his knee was swollen, painful, and barely mobile. He set to work in a home-schooled physical therapy program and was pretty mobile about a week before we were planning to leave.

Due to his time pressures and a little reluctance to take on a new mechanical task, he decided to have a Hudson shop replace his chain and sprockets. A few hours after dropping the bike off, he got a call from the repair tech asking him to come back to the shop. When he got there, the tech showed him that the previous owner had screwed up the countershaft retaining nut and, in a moronic attempt to repair his mistake, had welded the nut to the countershaft. The sprocket was worn out and moved freely on the shaft spline, behind the weld. The repair estimate was a dozen hours and nearly $2,000. Scott called me, hoping for some miracle, but I could only think of one possibility that didn't involve partial transmission disassembly; carefully grinding the weld away and using a wheel puller to break the sprocket away from the shaft. He had given up on riding the TDM east and didn't want to test my theory. The bike went to a Bayfield, Minnesota repair shop and Scott had his fingers crossed, hoping for a happy outcome. Three weeks later, the shop was still waiting for Yamaha to deliver some key parts. The repair costs were more affordable, but the time estimate for the repair was beyond the point of no return.

When he hung up, Scotty was done in. He'd been working for almost a year, getting himself and his gear and his bike ready for this trip and, short of buying a new bike, he was stuck. At every turn, something happened to keep Scotty off of the road. He couldn't catch a break on a used bike, on a repair shop, or on his own body and skill. He went on a little of the trip in his Toyota, but it wasn't the same.

When we got back from the East Coast, the second shop delivered the bike with parts missing. Important parts. The bike was leaking oil from a missing oil filler gasket. The chain had been installed with no slack. They'd installed the wrong front sprocket, gearing the bike down radically. They tried again and brought the bike back with even more problems. After several passes at repairing the problems they'd created, they started howling "What did you expect?" And even became downright threatening when he asked them to fix the problems they'd caused. Scott had to pull the whole bike apart to figure out what the shop had screwed up. A year later and dozens of hours of labor, Scott finally figured out the fuel delivery problems and the TDM is running like a TDM. He still hadn't taken a decent trip on the bike.

Sometimes, instead of calling for you, the open road does exactly the opposite. If you believe in omens and signs, it's probably best to listen. If you are of a more practical bent, you just tell yourself "the best laid plans of mice and men" and write off all that work and frustration as preparation for life's next event. Sometimes, you are just beaten by events and if there is a lesson in there, somewhere, you try to find it and learn from it. 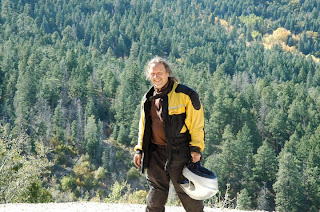 UPDATE: This fall, Scotty moved to New Mexico on his TDM without incident or mechanical interruption. After a couple of years sorting out the booby traps left by the previous owner and a collection of MN mechanics, the TDM appears to be a real motorcycle again. He's enjoying spectacular rides in the NM mountains and is even getting into riding the 850 off-pavement. Sometimes the break just takes a while to catch up to you.
Posted by T.W. Day