Cheap Bike and Me Part III

You may remember the tale of the Rat Bike from a while back. September, in fact. This is the whole, inside story of my part in that great event. MMM called this the "Cheap Bike Challenge." I agree there was a challenge.

I called Dana, the owner of the CB450, Wednesday night; three days before the event. Being a charter member of Minnesota Nice, Dana 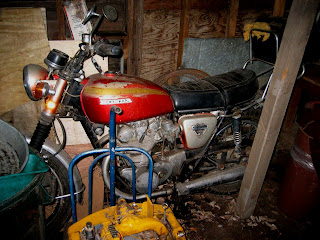 invited me over that night to look at the bike at his home in Bloomington; about 25 minutes south. It was truly in rat bike condition. The bike hadn't been ridden since Dana rode it from his parents' home to the shed in which it now resided, in 1987. On the upside, he said it mostly worked when he parked it. The tank had about an inch of stale fuel, but no rust. The engine had compression and turned over fairly normally. The forks obviously leaked and the boots were decomposing. The front brake demonstrated no signs of life. The tires were 20 years old and the rear was bald, while the front was just cracked and hard as bakelite. The odometer had logged 18,000 miles.

We settled on $200 for the bike, including Dana borrowing a trailer from a friend and towing the bi

ke back to my house. After we got the bike unloaded and took care of the money changing and paperwork, he headed home and I started taking the bike apart. Figured out the seat latch, got the tank off, and took a walk around the bike looking for the problems I'd have to solve in the next two days. Dana had pulled the starter motor and the shaft had a fitting designed for another purpose. It took some torch work to get the fitting off. Once I removed the seat, I discovered (thankfully) the battery was gone and an electrical bit was missing. Late that evening, Dana called to say he'd forgotten to grab the starter solenoid. Later, I discovered the shift lever was missing.

Thursday, I set out to bring the motor to life. The first task was to pull and clean the carburetors and purge the tank of its varnish-like substance. As expected, the carbs were gummed to death. I soaked the pair in toxic carb cleaner chemicals for the morning and rinsed the tank out with kerosene followed by a few pints of fresh gas. My first expense of the project was new hoses for the fuel system, $7. Before reinstalling the tank, I pulled the petcock and discovered that it was clogged with about 2" of black fuzzy weirdness and the strainer was dissolved. So, I dumped the whole mess into the carb chemical tank for the evening. The front brake master cylinder was empty, so I filled it and tried to bleed the line. No luck. The garage will stink for weeks of carb chemicals and stale gas. I made a circle around the bike, identifying missing and loose bolts and replaced a bunch, including both front engine mount bolts. The rear mount was completely missing, so I'd have to hope the engine wouldn't shake itself free from the frame on the ride. I can't do anything about that today. I did a continuity check of the alternator and the charge selenium diode. All good, although the diode has a higher than expected forward drop. That might mean insufficient current flow to keep the battery topped when the lights are running. I'd love to do a top end check, valve clearances and such, but without a replacement gasket on hand, I'm going to chicken out.

I installed the starter, more for the necessary sealing than because I expected it to be useful as a starter. When I put juice to the starter, the big gear it drove just spun disconnected from the engine. I hit the internet and found a storehouse of useless information about the history of the undoubtedly important-to-mankind CB450. Eventually, I also found an owner's manual, which listed a collection of routines for starting the bike that all seemed odd. More searching and I found that the starter gear had a clutch, located behind the gear and the alternator. That clutch was the cause of a lot of Honda owner misery and explained my starter's lack of connection to the motor. It's nearly midnight and I'm done for the day.

Tomorrow, I'll have to take the master cylinder apart and see why it appears to be pressure-less. Dana said it was working when he parked the bike. Maybe I'll luck out. So far, my luck has been mediocre.

Friday, most things went well for me. I pulled the petcock from the stinking chemicals and found it to be good; and clean. Back on the tank it went. The tank went back on the bike. The new supply hoses were all strung and I checked the tank for flow and the carburetors for the rare instance of float jet and needle similarity. Both carbs held fuel and there were no signs of flow in the clear fuel lines once the bowls were full. Amazing, probably the first occurrence of this miracle in the history of Klein carbs.

I tried kicking it over, without a battery, and had no luck. I decided either the charging system was toast or the bike needed some assistance from the battery for spark juice. I'm due in Bloomington to pick up the shift lever and the starter solenoid and a receipt for the bike during Dana's short lunch break. I thing, from exposure to the garage chemicals, I'm slightly stoned because I have never felt so unfocused on the motorcycle. Traffic is heavy and that adds to the terror. How do people ride drunk? This trip has scared the crap out of me. Two hours later, I'm back to work. Installing the solenoid gets the bike almost ready to try to fire up. Before that, I have to flush the engine, install fresh oil, and clean the centripetal filter. That's done in another hour and it's time to try the motor.

I hooked up a car battery to the system and test the starter motor. It spins, but doesn't spin the motor. I tried kick starting the bike, about two dozen kicks worth, and only get an occasional burping for my money. However, I sort of discovered the routine for the starter. If I bump the starter button while slowly turning the engine with the kick-lever, the starter clutch will catch and spin the engine. Usually, it would catch for a second and let go, but once it caught and spun the engine several revolutions and the engine fired up. Now, I know I have spark and fuel. Not enough fuel, apparently, so I applied a little starter fluid to the carbs while doing my starter button and kick-lever balancing act. After a few tries, the bike fires and stays running. I let it run for a several minutes, to let the engine get to operating temperature, before shutting it down and checking for fluid leaks. The bottom of the motor is dry, the carb floats still seal, and seriously noxious fumes are coming from the exhaust. I'm not leaking oil, but I suspect I'm burning quite a bit.

No time for analysis, I'm off to Fleet Farm for a battery (after hitting up the usual suspects on the local MC web for a used battery for a day or two). An hour burned getting and filling the battery and the charging routine burns a couple of hours while I work on other problems.

My two biggest remaining problems are title and license documentation and the lack of a front brake. The title crap is the hardest of the two, so I'm off to the DMV. Two hours later, at 5PM on the dot, I have paperwork and am out $40-some bucks for my bucket of bolts. It's really hard to remember why I wanted to do this after spending time with government employees. They were specially jacked about the fact that this bike hadn't seen a license plate or taxman since 1985. I didn't know there were so many supervisors in Roseville, until my DMV'er started asking for advice.

Back at the garage, I attach my new plates and tear off the front brake and master cylinder. All are filled with a brown goop that resembles mud soaked in fish snot. I pulled the brake mechanism apart and cleaned and greased the bits. A can of brake cleaner and the fish snot is gone, replaced by DOT3 brake fluid and sixty-zillion hand pumps later I have front brakes.

The battery is charged and installed. The bike fires on the first kick, a half-dozen times in a row. I rode it to the local gas station at 11PM, filled it up and returned it to the garage. After an hour loading the converted Sears-saw-to-faux-GIVI tailbox with tools, gear, maps, and stuff, I went inside and loaded some data into my Garmin 2620 for the next morning's trip to MMM's headquarters. Totally stoned by chemical fumes, I fell into something a little like sleep and more like a neural-hemorrhaged coma.