Mrs. Day watches a lot of streaming television. Today was no exception. We're on a sad death watch for our 15-year-old Aussie dog and that means we're shackled to the house for an undetermined period and that Mrs. Day has a great excuse to spend the day doing art work in front of the television. Being the helpful guy I am, I drop in occasionally to suffer with her. We're both suffering the odor of an old dog on her last legs and I am suffering television. One of the painful moments today was a binge on Seinfeld's "Comedians Getting Coffee" (or something like that). I am not one of "Jerry's Kids" and I usually think he is about as funny as a favorite pet on death's door. His visit with Bill Burr was no exception.

Jerry is one of those goobers who thinks incompetent engineering that makes a lot of pointless noise is "soulful." That particular program was in a 70s Mustang, which was a particularly pitiful excuse for a machine. While Jerry and Burr were carrying on about subjects they know nothing about, like engineering, I fiddled with one of my dumb retirement hobbies: model vehicles. Mostly, I assemble Tamiya motorcycles, but I've had this damn Revell VW kit in my pile of models-to-be-built for decades and I decided to mess with it this past week. 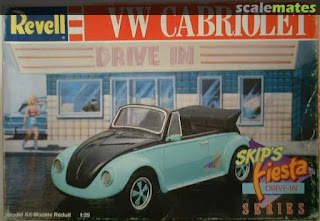 If you ever wanted to closely examine a good example of why manufacturing in the USA disappeared almost overnight, this kit would be a good place to start. It is, to put it mildly, a piece of shit. The pieces are poorly formed, the extrusion frames are huge compared to the part sizes and often there is more flashing on the parts than there are parts, and the detail is just embarrassingly mediocre. A few weeks ago, I spent a really fun few days assembling a Tamiya RZ350 Kenny Roberts Replica, so my standard of comparison is very recent. After I finish assembling this model, I'll probably just leave it in the box for some poor relative of mine to find after I'm dead. It will not be something I'll ever be proud to show off.

While I've worked on this model kit, I have been constantly reminded of David Halberstam's book, The Reckoning, a mid-1980s book about the fall of Ford and rise of Nissan. In describing the state of the US auto industry at that time, Halberstam listed the collection of lowered expectations American car buyers had to accept if they were going to "buy American." Things like patterned seat covers that were installed with not interest at all in maintaining some kind of consistency in the pattern direction or plumb line, missing fasteners in visually obvious places, paint jobs that looked as if they'd been applied with a half-empty spray can, and plastic parts like radio knobs and windshield cranks that fall apart on first use. This model reflects all of that kind of lack of concern that 70s American labor was famous for. It is a painful reminder of how quickly power can become weakness. This model was sold in the mid-80s about the same time Halberstam was examining the American auto manufacturing. Revell, of course, is no longer an American company; it's currently based in Bünde, Germany. Like pretty much every manufactured product that requires assembly skill, those skills are found elsewhere today. I bought mine in a model shop's going out of business sale in Colorado in the 90s. 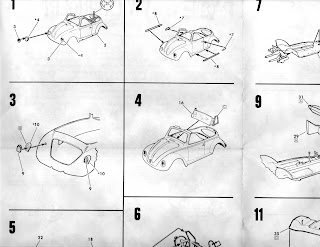 In the 60s and 70s, tech writers like myself often made fun of Japanese translated manuals. Even Robert Pirsig did it in Zen and the Art of Motorcycle Maintenance.  We were wrong. It's hard to tell from the picture at right, but this is the assembly document from the Revell model. You might wonder what's wrong with it, until you tried to assemble the model. Steps 1-6 are about putting together body and suspension parts. Step 7 is about installing the front suspension and the footwell cowling to the "chassis." That suspension piece you see at the fat left of the chassis just appears there like magic, then it disappears in 8-10, and magically reappears in step 20. That is the kind of crap that would make a kid migrate to Japanese models. like the dozens of Tamiya models I have built and never buy another Revell product as long as he lived. Not only was Revell incapable of building a quality model, they couldn't layout a competent assembly manual.

Not to split hairs but you Aussy dog is either an Aussie or an Ozzie dog. Cheers. Dave The Aussie.

Thanks, Dave. It's fixed and I decided on Aussie. What's the difference between Ozzie and Aussie? Just asking for a friend.