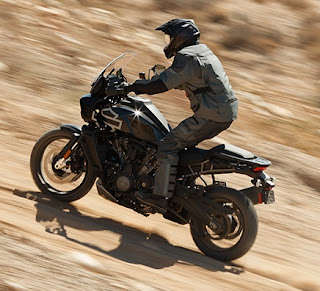 Harley Davidson is really putting on a marketing push for the “Adventure Pan America 2021” (although it was originally called the “Pan America 2020,” Thanks Donny). Harley’s marketeers have been talking about this bike as long as they talked about the Livewire before it actually “arrived.” And, like their electric bike, Pan America sightings are a lot like flying saucer reports. Some folks in the media have been allowed to see and even ride the prototypes over the last year, but they haven’t come up with any interesting specifications for the mythical ADV Harley: like weight, ground clearance, suspension travel, or even fuel capacity. All reports on the bike indicate it has a low seat height: which means it also has a low ground clearance, which hardly means the Pan American is a serious off-pavement vehicle.

Concept-wise, the new bike is nearly all non-USA-all-the-time with Brembo (Italy) front brakes styled specifically for HD, Harley branded tires by Michelin (France), Showa (Hitachi, Japan) forks, lots of Japanese and Chinese EFI, ABS, and EIS electronics, and a new liquid-cooled 1250cc “Revolution Max” engine that actually produces 21st Century power (143bhp and 90lb-ft of torque). Pointing out the many made-somewhere-not-America parts isn’t news to anyone these days. Pretty much, the only things most US companies are able to make are 1950’s technology bits, like bike frames and, hopefully, the gas tanks. 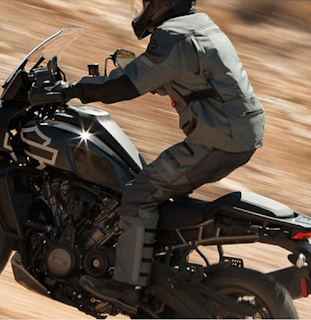 There isn’t much about this “news” that changes my mind about HD or it’s products, except that picture in their ad. At first, I thought, “Damn, HD finally hooked up with Aerostich to sell some good motorcycle gear?” A little research and I learned that is not the case. Aerostich is American-made in Minnesota, a few miles down the road from HD and Milwaukee, WI. Harley’s marketing folks decided to keep up the foreign sourcing of their crap by going to made-in-Pakistan and Holland-owned brand, RevIt. So, what little respect I had for HD’s made-in-the-USA self-delusion went out the door forever. 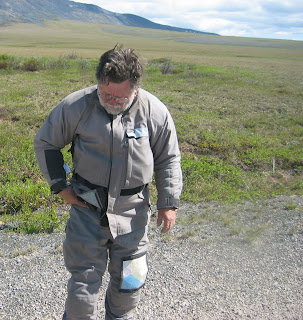 If you don’t see the similarities between HD’s promotional photo and my 2006 Aerostich Darien jacket and pants (at right), you’re just not trying. Everything about the HD ADV riding gear is ripped straight from the Aerostich drawing board. Everything, except the high quality materials, the real-rider design details, and the American-made quality that Aerostich has always provided.

The picture of me and my Darien suit has some context that might explain my frustration with HD and their lazy, cheap-ass marketing goobers. Moments before that picture was taken, I was sailing down the Canadian Yukon’s infamous Dempster Highway—bucking a 50-70mph side-wind, skating across a recently poured gravel road—when that wind got a grip on my luggage and flipped the bike backwards, dumping me in the gravel at 50+-mph. One second, I was “havin’ fun” (as my wife would say) and, the next, I was on my back sliding toward the edge of the highway and a permafrost swamp. Lucky for me, I was wearing real Aerostich gear (and several layers of insulation and clothing, since it was barely above freezing that day). The Darien’s well-placed TF6 armor and “Mil-spec 500 Denier Cordura®” kept my skin in place and most of my bones intact. (I broke a small bone in my right hand and re-cracked some ribs.) My Shoei helmet was trashed, with a small hole ground into the back of the helmet by that vicious, pointy Dempster gravel.

I still have that suit, probably a dozen or more cleanings later. I have a second Darien Hi-Viz jacket that I bought about ten years ago. I admit that I’m an Aerostich homer. I have owned and advocated for Aerostich gear and the Darien or Roadcrafter riding suits since the mid-1980s when I moved to Southern California and began a couple decades of spending almost all of my commuting and travel time on a motorcycle. Since my first Roadcrafter, I’ve seen dozens of Aerostich imitators and, through experiments by friends and acquaintances, watched people try to save a few up-front-bucks on made-in-China or Pakistan or where ever riding jackets and pants result in disappointment and/or injury. Some things just can’t be made well and cheaply.

Somehow, Harley and the motorcycle press are calling the Pan America a “middleweight bike.” I have to ask, in what world is a 1250cc hippobike “middleweight?” I guess, in this world. [Which means, I’m no longer obese. Yea Me! I might even be lightweight in this brave new, screwball world.] The Pan American’s weight and marginal off-pavement capabilities aside, Harley is taking a hard road in trying to catch up with and attract a motorcycle community that the Company has alienated with both its products and its gangbanger marketing tactics for decades. My guess would be “too little, too late,” but in copying and under-cutting the design of an actual American company that is near-and-dear to many of ADV and long distance motorcyclists with slightly cheaper made-in-Pakistan gear, Harley is making a statement (intended or not) that it is still either their way or no way and it won’t be hard to simply ignore the Pan America and the Company for a lot of people who have been in this market since the 80s or before. Harley is just another US company that can’t make a good decision even when it is staring them in the face from their own backyard.

Email ThisBlogThis!Share to TwitterShare to FacebookShare to Pinterest
Labels: adventure touring, aerostich, all the gear all the time, darien, protective gear, riderwearhouse

Really enjoying your blog, Geezer. I just stumbled in here via Google looking for info on an old (2008) Aerostich Darien jacket a buddy gave me--one of the old waxed cotton ones. I agree with you that the Pan America would be a silly choice for actual ADV riding, but then I feel the same way about those monstrous Beemers a la Charlie and Ewan. Who the hell would want to haul such elephants out of the muck, or even pick them up if they tipped over? My "off-roading" days are behind me, and even when I did frolic in the muck it was less by choice than necessity, living on a farm in Scotland about a mile from the nearest paved road or working as a rural U.S. Census Enumerator, seeking out "habitable dwellings" up in the Texas Hill Country on an old Norton N15CS "Desert Sled" or BSA Victor 441. Nowadays I just thump around on an old Royal Enfield Bullet 500, trying my best to keep it on the road. But if I WERE gonna take on the TAT or jump off that nice comfy asphalt, I'd surely consider one of those inexpensive but perfectly robust and suitable Royal Enfield Himalayan 411cc singles. A little Dutch woman named Noraly Shoenmaker, aka "Itchy Boots" of YouTube fame, rode her Himalayan from India to Malaysia, then right across Asia and the Caucauses, Russia, Turkey and Europe back to her home in the Netherlands, and then from the tip of South America all the way up to Peru, before being sidelined by the Kung Flu Quarantine. Yes, I'm a bit if a fanboy for the oft-derided Royal Enfield marque, but would a similar trip be possible on a Harley Pan America without a support crew and winches? Maybe, but I doubt it. Besides which, every time I read some Harley exec's buzzwordy BS de Jour, I throw up a little in my mouth.