It Just Rolled Out of My Life 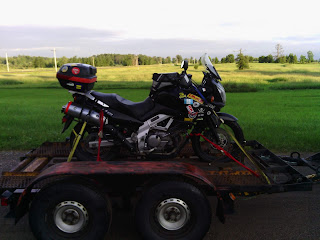 John Wright gives me a lot of crap for my lack of sentimentality in regards to my stuff; especially motorcycles. For a few moments, after my 2004 V-Strom rolled away behind a pickup on its new owner's trailer, I felt a twinge of regret. For a lot of years, I got as close as I get to loving that motorcycle. It took me places I'd always dreamed of going and it did it flawlessly and without a complaint. Every incident I had on that motorcycle was due to my own incompetence or lack of attention. Even after all of those moments of stupidity or foolishness, my V-Strom pulled me back out of every situation and got me to my destination and back home again. I owned that bike for 12 years, which is longer by almost a decade than I'd owned any other motorcycle before. 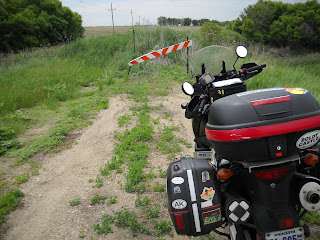 If there is every a Geezer with a Grudge book, this picture will be on the cover. I took it during my North Dakota Ghost Town Tour. I'd just ridden about 100 miles down a county road that was supposed to get me to a barely hanging-on ghost town, but the bridge had washed out and most of the road was crumbli
ng away. Thanks to the 250 mile fuel range, it was no problem. That sort of thing happened regularly on my weird-assed trips on the V-Strom. 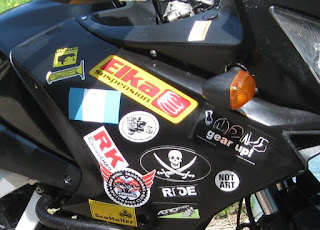 I think the things I will miss the most about that motorcycle will be the stickers on the luggage and right side panel that reminded me of where I'd traveled on this motorcycle. I often wished that I'd have bought aluminum cases because stickers attached better to that kind of case, but there were plenty of memories that stayed with the bike for years. I'll just have to try not to lose my mind any time soon.

One in particular was on the bashed up E21 GIVI case, "I Survived SASK 32!" That was an adventure.Sooner or later, I really need to write up that story.

If you ever needed evidence of cheap I am, the box of parts I had for the V-Strom was it. Not the extra sprockets, levers, oil filters, stock shock, scraped up Suzuki tall windshield, or the air filter. In the ad I wrote, "The fairing and front fender took a beating when I was blown backwards on the Dempster Highway in the Yukon and that is my excuse for the decal-decorated right side fairing. I broke the mounting for the right turn signal when I dropped the bike in the driveway last fall and somehow the left turn signal wiring disconnected then, too." And blah, blah. 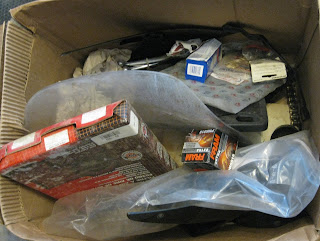 Turns out, one of the items in the bottom of that box was a brand new fairing piece intended to replace the broken section the turn signals mount to. I have probably had that available since a little while after I got back from Alaska in 2007, but since the glue job held I didn't have the motivation to replace it. All those folks who whined about how they couldn't find replacement plastic on eBay (you can and I did) really missed out because it was there waiting for them to snag the bike. The guy who bought the bike wasn't intimidated even a little by the cosmetic work needed and his reward for that was getting the necessary piece as part of the deal. I kinda love that.
Posted by T.W. Day at Tuesday, June 26, 2018

I own a 2012 VStrom since last year and after reading your last few blogs about yours, I am happy about owning it. Otherwise I have a roving eye for motorcycles (and I want at least one of each type). Thanks for sharing your experiences with the noobs like me.

It is a great motorcycle. I hope you have even more fun on yours than I did with mine.

Brad Sinn, formerly of MN, now of the mountains of AZ said...

There are, occasionally, mechanical things (motorcycles, pickup, tools, camera, guitar)in my life that just fit my needs for them so well that I get attached. I get attached not just to the memories made with them but how they function and feel. I understand.

We're stumbling along trying (or just talking about) continuing our downsizing. When we decided to leave our Little Canada house, I knew my studio rat days were over and my microphone collection needed to go. Those kinds of things don't store well, especially in humid Minnesota. Plus, someone ought to be using them if they are actually tools. So, I cut that attachment and sold about $40k worth of microphones and paid off our house with the cash. Likewise, someone should be riding that motorcycle and it wasn't going to be me anymore. It went to an excellent home.