My old MMM editor, Sev Pearman, sent a discussion group a link to an announcement from The Company about their prototype electric bike, Project Livewire. Expressing his Geezerly self better than me at my worst/best, Sev concluded, "I have zero interest in electric vehicles; pitiful range is but one of [my objections]."

My reply to that was, "The only thing that keeps me off of Zero's new bikes is the purchase price. Price per mile crushes internal combustion engines, but I don't have to worry about a motorcycle with a power train that could last 250000 miles. I won't live or ride that long. 150 miles is enough range for 90% of what I do and a 6 hour charge is fine. In a few years, capacitors should replace batteries, charge times will drop dramatically, weight and range will expand nearly exponentially for the size and weight, power and performance are already comparable to or superior to internal combustion, emissions will finally be as good as cars or better, and that fuckin' noise bullshit will be history. If you don't like maintenance, electric motors are the bomb. A bike you can tweek to your performance standards through a USB port is right on target with the current and last two generations of possible motorcyclists."

Sev's response was, "Blah blah blah No offense, Thomas, but this is the same 'in the very near future...' song that I have been hearing for 40 years. I distinctly remember reading this in both Popular Mechanics and Popular Science in the early 70's. Sorry, color me skeptical."

Obviously, I'm comfortable with skeptical. In fact, when it comes to the blathering of economists, southern politicians, the major media talking heads, and any so-called "authority figure," skeptical should be the default attitude. However, when scientists and engineers talk, I listen with a relatively open mind and some expectations. The fact is, no one writing for Popular Mechanics or Science was talking about semi-permeable molecular capacitors, lithium polymer batteries, lithium ion batteries, or even nickel-metal hydride batteries 40 years ago. Hell, sixty years ago Popular Mechanics and Science were babbling about flying cars and computers small enough to fit into a basketball gym and powerful enough to add really big numbers reasonably accurately. In 1989, some overly optimistic scientists claimed to have cracked the secret to cold fusion and the resulting inability of other researchers to replicate that experiment created enough psycho-babble from the media to convince the average schmoe that all science was fake and nuclear energy was at a dead end. Today, Westinghouse, GE, and a collection of foreign competitors are on the verge of making small liquid metal modular reactors available for applications from small electric engine power to portable electric generators and everything in-between. It could be a deal-breaker for the oil companies and revolutionary for electrical generation, but most people are fixated on Three Mile Island, Chernobyl, and the false cold fusion story.

Stay tuned, electrical generation could be the new cheap energy. Ballard Power Systems, a Canadian fuel cell manufacturer, is contracted with Volkswagen's fuel cell development program and a couple of large bus manufacturers with working prototypes in service, not to mention providing the power for Toyota's corporate offices in Torrance, CA. All kinds of science fiction stuff is happening right now and almost none of it was predicted or promised 40 years ago. About the only prediction that has been reasonable useful from the last 50 years has been Moore's Law. ("The complexity for minimum component costs has increased at a rate of roughly a factor of two per year. . .") Gordon Moore's succinct technology estimate has been reasonably accurate for at least 30 years and there is every likelihood that it will be revised upward with new technology.

If the USA was driven more by technologies than by idle and incompetent corporate back-stabbers and lazy and corrupt old technology billionaires, we'd be enjoying a whole new world of high efficiency transportation and putting a serious dent in the atmosphere's carbon content. A real war on the world's terrorists, begun back in 2001, would have crushed the oil cabal, launched the US into the 21st century with a vengeance, and revitalized our technology industries like nothing since the 1960's space race. Instead, we choked, took the easy way out and invaded Iraq hoping for a quick fix with that country's "oceans of oil" and blew two decades on militaristic decadence. Catching up is much harder than staying ahead, in any kind of race. Technology and change don't depend on American exceptionalism and all of those technologies we ignored are going ahead without us. Just ask the remnants of the Ottoman Empire and the struggling descendants of the world's great powers of the past: Greece, Italy, Spain, Portugal, France, England, Russia, and, even, China (only now crawling out of the ruins of its 4,000 year old civilization). 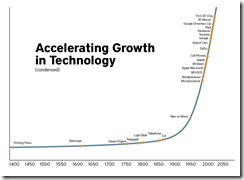 Semiconductor density is not the only technology experiencing exponential change. You know that bullshit small print thing stockbrokers hope you don't read regarding the odds that the stock they just conned you into buying will produce a profit (for you)?  "Past performance does not necessarily predict future results." Look at the chart on the right, that's what an exponential curve looks like as it approaches infinite change. Ray Kurzweil called this the "Law of Accelerating Returns." The steps in that chart are 50 year intervals and the X-axis is linear, but the Y-axis is more exponential than linear. The technology development required between the printing press and the telescope (a 200 year interval) was insignificant compared to going from what existed at the start of the space race to our world of cell phones, personal computers, and the Internet (20 years). The same comparison will be made between the last days of hydrocarbon-based energy and whatever comes next. The technological growth rate of the last decade will look absolutely stagnant compared to the next ten years.

Back to electric motorcycles, the only thing that keeps me off of one is the cost. Certainly not the cost of operation, but the cost of ownership. At 66, I can't justify a $10,000 motorcycle of any sort. I don't expect to live long enough to consider that a rational expense, especially in Minnesota where half of the year is lost to rotating my battery tender from the V-Strom to the WR250X. $5,000 is a whole different game. Zero's 2015 battery pack is expected to live for 2,000 charge cycles (at least 200,000 miles) before it deteriorates to 80% of new capacity (probably the recommended replacement point) at 185 city miles or 94 highway miles per charge.  At the current 6-8 cents per kilowatt, Zero's 1.4kW charge requirement makes for pretty cost-effective transportation. You just have to have a 200,000 mile life expectancy to justify going electric. I do not. If you are a decade or three younger than me, you should start thinking about what your first electric motorcycle is going to be, because that's very likely going to be a big decision in every motorcyclist's life in less time than you expect.

POSTSCRIPT: I'm hiding in New Mexico from MN's 2017 and the Trump bullshit and hanging with a mechanic friend who has a huge collection of battery powered tools. If anything demonstrates the rapid evolution of batteries, it might be powered hand tools. He has a selection of batteries from the last 10 years of impact tools that range from old Makita's 14V, 10W nicads to the most recent 14V, 40W lithium-ion batteries. The weight and size change is mind-boggling. The whole tool weighs less than the old battery used to weigh, by a long shot. Even recent technology batteries seem primitive in comparison to the new stuff.
Posted by T.W. Day at Monday, April 17, 2017