For the hundredth time in our acquaintance-ship, the dude called me a "bigot" because of my general dislike of the cruiser class of motorcycles. I get this charge from a couple of folks and a fair number of readers. They think the accusation is a major blow to my credibility as a motorcyclist and a writer and a person. I think they are somewhere between goofy and overstuffed with themselves.

For starters, bigotry is no small thing. It's a word with meaning, history, and authority. Webster's defines a bigot as "a person who is obstinately or intolerantly devoted to his or her own opinions and prejudices; especially : one who regards or treats the members of a group (as a racial or ethnic group) with hatred and intolerance." In respect to motorcycles, my first thought is, "Get over yourselves."

Nothing about disliking a particular type of machine is anywhere near as despicable as racial hatred or intolerance. An overweight, barely mobile, noisy, awkward, and gaudy motorcycle design is still merely a silly toy. I'm not even disliking a means of transportation, just a style. In general, I don't like bagpipes, banjos, women's basketball, hillbilly music, hip hop, uncomfortable shoes, liver and onions, cancer and heart disease, or the sociopathic institution of "incorporation." In specific, there are some instances of each of those (except cancer, heart disease, and corporations) that I can tolerate in small doses. Except for three exceptions, I don't hate any of that list. 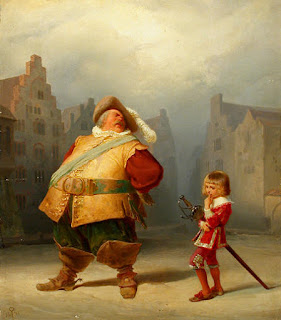 However, taking the accusation half-seriously I thought about comparing the typical cruiser to the description of a person, using the word's definition. What I came up with is someone who is grossly overweight, stubby-legged, physically incapacitated to the point of presenting a hazard to himself and anyone nearby, wealthy (or expensive, if a dependent) and high maintenance, noisy and constantly trying to draw attention to himself, and who dresses like one of those characters at the Renaissance Festival. Shakespeare's Falstaff is exactly my mental image of a cruiser-as-a-person. Falstaff may be the kind of guy you want to hang out with in a bar, but he'd be a lousy choice of partner in a bar fight. If you don't need intellectual challenge, Falstaff might be an entertaining conversationalist, but not in a library or hospital corridor where his noise, bluster, and stupidity would piss off anyone with an IQ over moronic. As a whole, Falstaff is exactly the kind of person I try to avoid under all circumstances. You'll notice there is no color or ethnic component to my description. I don't buy that avoiding this character qualifies as bigotry. I'd call it "discretion."

However, cruisers are not animate objects and are unworthy of hatred; any more than banjos are truly despicable or heart disease and JPMorgan Chase deserve to survive into the next decade. I can't generate anything near hatred toward any kind of motorcycle. What I do dislike the most about the run-of-the-mill cruiser is that they violate my esthetic sense. Like Falstaff, they are not pretty. Since I'm stuck with a personality that requires form to follow function, the lack of function in cruiser-form is just ugly.

If you're honest, you'll have to admit that I'm not obstinate in my objection to the cruiser style. I've ridden a couple dozen of the genre over the last two decades and I'm always open to the hope that "this one is different." So far, I've been disappointed. The least disappointing of the bunch was the H-D Sportster Sport, but grinding the right-side pipe exiting the Denver dealer's parking lot as I merged into Colfax Avenue traffic didn't raise that bar very high.

Not being a roadracer, there have been a few sportbikes that disinterest me as much as cruisers. Since my mid-fifties, I can't twist myself into that riding position for more than a few minutes without permanent injury. The only cycle style I haven't tried out has been trikes and I gave them up when I graduated to bicycles in 1954. My Hoveround® days will arrive soon enough, I don't need to accelerate the decline.

I have always felt the only real defense I have in traffic on a motorcycle is maneuverability. That's it. If I am not able to change or split lanes quickly, stop or swerve, see over and around other vehicles, or abandon the lanes of traffic and head for a ditch or someone's lawn, I feel naked and exposed on a motorcycle. The only part of motorcycling on the street that approaches a "sport" is the part the motorcycle plays.

Cruisers don't have the ground clearance necessary to pretend to be athletic. Their weight and weight-distribution, width and length, silly handlebar shapes and irrational foot-peg placement, and parts placement are the antithesis of "athletic." That blubbering potato-potato noise sounds practically asthmatic. The louder it is, the more injured it sounds. My term for that design, "hippobike," comes from watching the things wallow through corners. It's almost painful to watch those crippled machines attempt to escape from a stop light before they are run over by the distracted or irritated SUV drivers behind them.

So, while you may call wanting to avoid a noisy, dangerous, cowardly, clumsy, fat man a prejudice, I don't buy it. You can tell yourself that my dislike for overweight, lumbering, badly designed, noisy motorcycles is bigoted, but the reaction you're going to get from me is a chuckle and a little more social distance. If you can't pick your friends any better than that, you are already used to disappointment. If those are the characteristics you look for in a motorcycle, you're "crusin' for a bruisin'."

Well said. My own personal gripe with the Hardley crowd is how they all seem to buy an image along with their bike. How Hardley ever got real people to think that fringes, tassles and lace up leathers was a good masculine look is beyond me?

Gloves that don't even cover the whole hand, made of nappa leather so thin and soft you could spit through it dont count as protective gear either!!! Ditto crap helmets etc, etc.

I once worked as a motorcycle courier and all sorts of wannabe’s passed through during my time there. Those on race reps or Hardley’s (or their clones) rarely lasted more than a week or two. The bikes were just too uncomfortable fro the riders to last the distances required, too unmanoeuvrable to do enough pick ups to make a living, and had far too bad fuel consumption and too high maintenance costs in the real world to make the job pay.

I once asked a Honda clone rider how he coped with the huge ape hanger bars that he had fitted to his bike. His reply was that he periodically had to use cruise control to let him alternately take one hand off the bars for a minute or so and shake it around to restore the blood supply to that limb! ‘Nuff said here really. There is no need to explain just how stupidly not in control he was.

I mostly agree. The odd thing for me personally is that I'm a re-entry rider after taking a 5-year hiatus (I'm an old guy) and ended up on a Harley. I've done most of my miles on an old airhead BMW but have also had a Honda, Kawasaki, etc. all standard-style bikes. My re-entry bike is a 1999 Sportster. It has been among the most reliable, comfortable, usable bikes I've owned but not as is. It has also needed the most work to make it handle right. Forks were horrible, way too little preload. Shocks were garbage, threw them out and added lots of travel, etc. It's like a bought a motorcycle kit.

There is, however, one thing I can't stand about it. I don't want to be part of the "Harley crowd". Way too much pirate-clothing, loud-pipe, nonsense for me. It is also noticeable true that they don't wave at guys who wear helmets and dual sport jackets.

The best thing about writing this column is feedback from my readers. You two are great examples of why I keep putting words on paper/hard drive space. The idea that you (Brad) modified your Harley with suspension improvements (instead of the usual bullshit) gives me some hope for humanity and motorcyclists. You might be my personal hero of the month.

Please keep writing and posting your MMM articles, you are right up there with Peter Egan for motorcycle writers I never miss. I am afraid I let you down though, please erase my personal hero status. Even after getting a Sportster functioning as it should (and as it should from the damn factory) I recently sold it and bought a Ducati ST2. Hopefully the next owner doesn't screw the HD up. I had removed loud aftermarket mufflers and put a set of factory stock ones on it, they're quite easy to find. The fact that they asked if I still had the "loud pipes" isn't a good sign.