In late 1998, I wrote a letter to MMM titled "What are We Riding For?," which morphed into this column. In 1999. I wrote a column titled "What Are We RiI had a lot to say ten years ago, a lot of pent up vitriol that I'd only expressed to riding friends. Since then, practically every foolish motorcycle-related thought that has popped into my head has appeared in this column. Still, the motivation to write the Geezer rants comes from the same place; the reason I still ride to work, take extended trips on two wheels, and spend time in my garage playing with my two bikes pretending to be a mechanic. I write about motorcycles and motorcycling because it's an activity that inspires some passion in my old, creaking bones. Some days, fooling with a motorcycle is the only thing I do that I really look forward to doing.

On mornings when I dread all of the things I have to get done before I can fall back into bed, I always anticipate the ride to work, the awareness that I'm doing something slightly dicey, something that requires more-than-typical concentration. Of course, there is also the opportunity for adventure that every moment on a motorcycle provides. Even the little duels that unaware cagers provide as they wander into my traffic lane or attempt to compete for my space on the road intensifies my attentiveness to what might, otherwise, be a boring day in the life. Anything that doesn't kill you makes you stronger? Maybe, but if those moments don't kill or maim they will definitely wake you up.

The majority of motorcyclists would be insanely bored or appalled by the bike I usually ride to work; a 250cc dual purpose Kawasaki. It's not fast, it's certainly not powerful, it's not pretty, it is quiet, and it gets stupid mileage; never less than 60mpg. I bought it used and spent a fair amount of energy and time bringing it up to ride-able condition. I have almost as much fun working on the little air-cooled single as I have riding it. This past winter I planned on spending a lot of cold weekends in the garage turning it into a mini-adventure tourer. The seat needs a total redesign and the 1.7 gallon tank is about half the capacity that I want for this summer's adventure. This winter, I disappointed myself. I came down with a flu on Xmas eve and hadn't recovered from that bout with mortality coming into spring. Every time I ventured into the sub-freezing garage, I ended up a little sicker and, finally, I gave up on getting the bike work done until summer.

The cool thing about a bike like my little 250 is that it fits between my two cages in the garage, so getting it out for a late fall or winter ride isn't a major hassle. When the cages come inside for the winter, the V-Strom is too damn big to keep at the front of the garage. So it goes into the back parking area and the only way to put the big bike on the road is to get my wife's Taurus out of the way, wrestle the bike out from between her scooter and the bike a friend stores in my garage through the winter, and over the woodworking crap that always builds up during the winter months. The 250 is always ready for a ride to work or an errand run or a quick trip down the backyard hill and a few laps around the frozen lake in our backyard. I only managed a half-dozen ice laps this winter, but it was worth the effort.

There is something satisfying about parking an ugly little bike between layers of garage jewelry at motorcycle events. It's the same kind of smug satisfaction I get when I tail some rich guy's zillion dollar sports car through mountain roads, knowing that he's pushing his ego investment as hard as his skill allows while I've got a pass lined up on practically every wide spot in the road and my beat-up $3,000 "dispose-a-bike" is barely working to keep up. Passing the rich dude would take all of the fun out of watching him squirm to stay ahead. Being cheap has all sorts of rewards and being cheap and reasonably quick has even more. I can't afford to be cool, but I keep myself entertained and that's all I really care about.

One of my favorite jokes is about a guy who hires a hooker and when he drops his pants is asked, "Who are you going to satisfy with that little thing?"

That's me and my motorcycles and a good bit of my life. I don't need to or have the resources to impress you with what I ride. I'm too old and too worn out to win races, beauty contests, or make fashion statements. I don't know style from ugly, or care. To me, describing a product that is supposed to have a function as "art" would seem like an insult. I think motorcycles should be vehicles that can go places faster, cheaper, and with more versatility than any other form of transportation. Violate any one of those attributes and I lose interest. 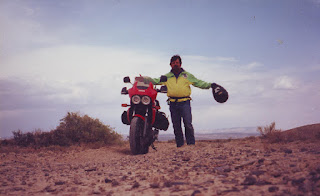 This picture of me and my Yamaha TDM from a 1994 trip west is pretty typical of my favorite motorcycling moments. At that moment, I was lost on a trail that vanished into the desert on the western edge of Flaming Gorge National Recreational Area. I'd just managed to plug a cactus-punctured tire and decided to take a self-portrait before I picked a direction and headed off with barely enough fuel in the tank to start a decent campfire. As usual, it turned out that I was only a few miles from a fire road that led me back to the main highway and into Vernal, Utah running on fumes. At the time I took the picture, I half-assumed that someone would find me, the bike, and the pictures in my camera 20 years after I died of exposure in the Utah desert.

There is a liberation that comes from knowing that nothing but your resources and luck are between you and disaster. Commuting by motorcycle even gives a little of that sensation, as you are surrounded by cagers distracted by cell phones and boredom. Loading up a bike with gear for a few days on the road, flipping a coin to pick the direction I'll travel, and heading off toward unknown places at an unpredictable pace is the kind of experience that can't be imitated in the confines of a air-bagged, environmentally controlled, entertainment-centered cage. A trip on a motorcycle is a different kind of experience from any other form or transportation. Even when you are in a pack of motorcycles, you are alone. I figure I might as well go the whole way and be as alone as I can be, because that's a big part of the reason I ride. .