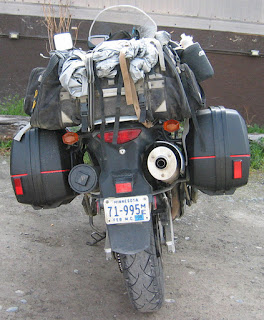 [Right: The big-butt look of a Suzukli DL-650 and a pair of GIVI E36 side cases. Now I can take up as much room in a parking space as a Goldwing.]

It's hard to imagine a product that has been more written about than GIVI Monokey™ cases, but here I am writing about them. The GIVI E36N USA Monokey™ cases are side loading, 36 liter capacity, touring cases. The 36 liter cases are the smallest touring cases GIVI offers and because of that they are the narrowest touring cases available from GIVI. This was important to me because the Suzuki V-Strom has a high, large exhaust pipe and GIVI's mounting system attempts to make the silhouette and balance as symmetrical as possible. As you can see from the back view picture, that adds a lot of width to my motorcycle's rear-end profile.

Since I planned about 1,000 miles of fire-roading on my 2007 Alaska-Canada trip-Northwest USA trip, I was concerned that the added girth would result in some unnecessary "adventures" added to my adventure tour. The off-road stuff turned out to be pretty tame and there were only a few narrow passages, between 4-wheel vehicle guards, where the cases were a problem. On the other hand, I managed to cut a few filling station and motel corners close enough that I bounced the cases off of posts, buildings, and other "obstacles."

My following year's trip to Nova Scotia was less eventful, but the backroads between the far east end of the country and here put a significant vibration test to the cases and mounting. In 2009, I really put a pounding on the GIVI gear on my 3,500 mile North Dakota "ghost town tour" and the stuff held up without a moment of problem. At a filling station in Bismarck, ND, a cruising hip-hopper in a 70's Buick side-swiped my left side case, pinning me between the pump and the bike, hard enough that the lower hinge sprung open and left a 1/4" gap at the bottom of the case. I was sure that damage was permanent, but when I opened up the case, the hinge popped back into place and no injury was done, other than some bumper scratches on the side of the case. (Of course, the Buick driver, being the responsible citizen he was, sped away when he heard his car hit my bike and he saw me squashed against the pump. I'm sure, if he reads this, he'll be happy to know he didn't kill me.) Last year, my grandson and I racked up another 3,800 miles in the Rockies and on Midwest states' backroads and I have begun to treat my luggage like the most durable part of the motorcycle. 50,000 miles after snapping on the E36's, they are going strong and as utilitarian as the day I installed them.

I met another V-Strom rider on my 2007 Alaska trip who had laid his bike down at 30mph on the Alaska Highway and, while the cover of the case was nicely road-rashed, it was still solid and in one piece. He also had an E46 top case and noted that the seal was so tight on that case that he had trouble opening it when going from a high-altitude campsite to a sea level site. He claimed that when he opened the case he could hear a "pop" as the air escaped. We were both impressed with the extreme waterproof qualities of our GIVI hardware, especially considering the fact that we'd been rained on for more than 20 days straight..

The GIVI mounting frame for the V-Strom is something worth discussing. It's built to take abuse and to support substantial weight. The frames are designed to accept any of the GIVI Monokey™ cases, which means anything from 21 liters to 52 liters could be mounted to the same frames. In all of the above crash and fender-bender scenarios, the GIVI mounting system was undamaged. For a 4-day vacation trip with my wife this summer, I added the GIVI E528 tail-case mount. Like the side-case mounting system, the tail-case mount is easy to install and built to withstand abuse and support any of the GIVI Monokey™ cases. Attaching the cases to the mounting system is simple, quick, and almost foolproof. All you need to do is align the bottom of the case into the two tabs and snap the top keyed-section into the Monokey™ lock.

I'm totally impressed with GIVI's Monokey™ mounting system and never, even once, had a problem with the case attachment; durability or security-wise. These are tough cases that aren't quite deep enough to hold a helmet, but are plenty big enough for a significant amount of luggage. My wife and I managed to cram all of our clothing and necessities for our 4-day trip into one E36N case, which gave her more passenger peg leg room and a back support.

You'd think that a measly 30 liters capacity increase would be pretty meaningless with a load like mine, but you'd be wrong. Being able to load the cases from the side, meant that my packing was organized, accessible, and logical. The E36N cases, however, make perfect sense for adventure touring or vacation trips with a passenger.

My wife complains that the location and width of the cases make it difficult for a passenger to mount the bike. I haven't found a solution to the wife-comfort problem, but my grandson didn't have any complaints. However, passenger comfort aside I have depended on my GIVI cases for more than 50,000 hard miles and they have never let me down.

Postscript: In 2017, most of my V-Strom is degrading with age and abuse, but the GIVI cases will be one of the things I will miss the most when I sell this bike (probably next spring). The three best things about my V-Strom are the GIVI cases, the Sargent seat, and the ELKA rear shock. Without those three modifications, I'd have given up long distance motorcycling five years ago.
Posted by T.W. Day at Wednesday, October 05, 2011