Minnesota, Still Not the Place to Buy a Bike

Way back in 2005, I was hunting for a dual purpose commuter bike and I wrote about the weird Minnesota used bike seller's market. I'm not really in the hunt this winter, but I'm interested in a couple of possible upgrades to my garage candy. So, I've been watching Craig's List and that got me into a couple of email conversations with sellers. While the country is mired in what is likely to be called the New Great Depression, motorcycle prices are just as idiotic as always in Minnesota. As I write this it is 3 degrees outside and we're not likely to see anything dramatically warmer for at least a month. Why anyone would buy a motorcycle in Minnesota in February is a mystery that leads the investigator into the realm of insanity and irrational behavior.

The longest conversation I had with a seller this winter was with a guy who was selling a Suzuki 2006 DRZ400SM. The bike was a ways from my ideal, so I was mostly curious as to why he thought he could get $5000 for a used motorcycle that sells for $6300 list and is usually discounted another $500-1000 because dealers can't move them fast enough at list price. His explanation was that he was "underwater on the bike" and couldn't sell it for less without having to come up with cash to pay off the loan. He was also desperate for cash, since he was buying a home. Obviously, his banker didn't learn anything from the last year of sub-prime mortgage lending fiasco.

Like all certifiable Minnesota motorcyclists, this guy was convinced that he would get his price and that I was trying to cheat him by quoting the Kelly Blue Book price or any other reference. He was particularly incensed by my suggestion that his Two Brothers pipe, the carb kit, and the resultant "tuning" he'd done had devalued the bike below the Blue Book price. As if paying lots of money for wreaking the performance and multiplying the irritation factor of the bike makes it less valuable? What kind of crazy person would even suggest such a thing?

After 14 years in the frozen north, there are two things I firmly believe Minnesotans are incapable of accomplishing: any aspect of competent highway design and all areas of motorcycle tuning. I would pay extra for a used motorcycle that has had every adjustment factory sealed so there is evidence that not a single screw has been turned, a jet replaced, or a needle moved by a resident of this state. Every motorcycle I have purchased in Minnesota (and a couple of other places near here) that has been "tuned" by a past owner has required hours of repair to get the bike back to something resembling the original factory-issued performance. Bike after bike has been hacked, piped, and mangled until the poor things can barely get out of their own way. Which is what led the previous owners to give up and sell their precious motorcycles for the outrageous pittance that I'm willing to spend.

As to the pricing issue, I regularly remind myself of what motorcycles are actually worth by referring to Craig's List in Denver, San Diego, and Los Angeles; places where people actually ride motorcycles regularly and year-around. That used and abused 2006 DRZ400 would be priced from $1600 to $3400 in Denver, no more than $3000 in San Diego (with useful add-ons instead of noisy ones), and rarely more than $2500 in LA/Orange County. There are lots of bikes to choose from, too. The price will go up a little in Denver during the summer, but prices are year-around-constant in southern California. Even crazier, once you get to California or Colorado, you can find better deals than those on Craig's List or the city newspapers.

You could argue that driving from Minnesota to any of those places and riding back would wipe out any savings you might get. True. That doesn't explain the completely unrealistic Minnesota and Midwest prices, but that is true. On the other hand, since you're buying the bike to take a trip why not take a trip, buy a bike, and take another trip back home on the bike? I've done that, twice, in the last 10 years and both trips and bikes were well worth the train ride to the bike. I like train trips almost as much as motorcycle trips, so it has been a double-win. I have some friends in southern California I haven't seen for a couple of decades, maybe I need to plan a spring trip to the coast to buy a bike?

As usual, "just looking" is turning into something more focused. I don't need a new motorcycle. I don't even really want one. Ok, that's a lie but not much of one. If I could get the damn Sherpa to quit dribbling oil I'd be happy with it as my commuter bike. I am happy with the V-Strom and don't expect to replace it for years to come. I think looking at idiot Minnesota used bike prices challenges me to get a better deal, just to show that I can. 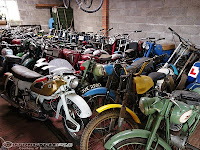 Economically, none of this (including my end of the deal) makes any sense. A smart guy would, at least, sell the bike for a Minnesota price and show some kind of profit. I still don't have the Minnesota hoarding gene. When I'm ready to sell, I look at the Blue Book trade-in price and advertise my bikes in that territory. I deal, too. Make me an offer anywhere near my asking price and I want the damn thing out of the garage to make room for whatever new thing I'm occupied with at the moment. That goes for everything I own, not just motorcycles. For 40 years, my idea of living right was to be able to pack everything I own into a VW bug. My motto was "when in doubt, throw it out." I'm old, settled, and married so that's been modified a bunch over the years, but it's still an ideal. If I don't "get my price," I'm as likely to give it away as I am to find a place to store stuff until I can sell it. I take "use it or lose it" seriously.

I guess that explains why I will never be a real Minnesotan.
Posted by T.W. Day at Wednesday, February 24, 2010

I've noticed the Craigslist phenomena here in upstate NY. Craigslist prices are in general ridiculous. Recently I've seen some used bikes listed for more than new bikes are selling for. Plus, never go for the used bike that has been "tuned" or has a special "pipe." That usually indicates gross abuse on the part of the driver. Tuners are the guys doing wheelies down the thruway. And, I hate to say it, but I'd rather buy from some older person or a woman. The younger and more male the person, the more they've abused the thing. I like your idea of the road trip, but make sure you can get a temp. plate to bring it back. Some states, or at least Massachusetts, do not allow you to drive out of state with a temp plate.

Of course this appeals to my East Coast bias, as you probably know. You'd think there wouldn't be much ignorance of the "market" value of things these days with the internet.

Evidently people want the "individuality" of bad running more than they do the function of good running. Well, OK, I can kinda see that. Otherwise why would people buy so many Harleys instead of regular motorcycles? To be individuals! And completely distinct from the other millions who have made the same conformist purchase. Used to be that Boston area kustom builders would congregate on fine Saturdays at the margins of Cambridge Common. One day, surveying a long row of near-identical "Chawppiz", with jacked-up passenger seat, chromed hanging planter rack, and into-the-next-county raked front end, someone asked an owner why he'd built his bike.

Victor, my editor, has gone on record saying the ultimate custom Harley would be one that is bone stock, without the usual dealer "pipe mod" or any other "sign of individuality."

I didn't think about the temp license plate restrictions. I'll be sure to check out my route back before making a trip. So far, I've crossed Indiana, Ohio, Michigan, Iowa, Wisconsin, Illinois, Nebraska, the tip of South Dakota, and Colorado on my way back to Minnesota on a newly aquired bike. However, now that you mention it the guy I bought my V-Strom from loaned me his plates for that very reason. I mailed them back to him when I got home.