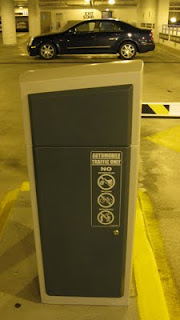 I'm back to work, after a summer "off" from my regular job. I'd been to a couple of meetings before school began and one of the motorcycle riding instructors had mentioned that he'd received his first parking pass and hadn't been able to find a place to park in the lot. He mentioned a "no motorcycles" sign, but I blew that off as unlikely. I'd parked in that lot for more than 8 years. On the other hand, in a ten bike parking space over almost a decade, I'm almost always the only bike in the lot.

After getting my pass, my first day at work, I found the parking garage card reader seemed to ignore my presence. I swiped the card over the meter a few times, gave up and rode around the gate. I figured I would sort it out with the parking lot guy when I left. However, when I got to the exit my pass opened the gate and I left without having the conversation. That has worked for me for the last week. Since I'd been clued about the "no motorcycles" thing, I was looking for it and, finally, found it. There is a small sign on the gate mechanism that says, "Automobile Traffic Only NO Motorcycles, Bicycles, Pedestrians." 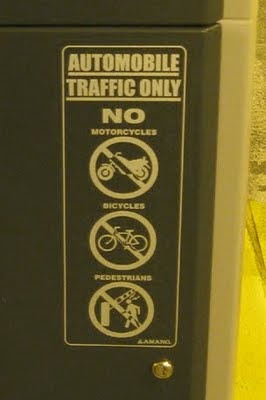 My employer pays quite a bit for my annual pass, and gives me the option of taking an annual bus pass instead, if I choose to go the public transportation route. So far, the parking mafia guys haven't seen fit to enforce the "no motorcycles" warning. If they do, I'll starting figuring out my bus route again. I drive the cage to work about two months a year and that's more than I want to be driving.

This is an example of the "respect" motorcycles get as a method of transportation in the United States. An entire parking garage, because of incompetently designed traffic management equipment, becomes a "no motorcycles" zone. Substantial space remains useless in the garage because cages can't fit into that space, but bicycles, scooters, and motorcycles could. Rather than welcome those customers and encourage additional business, firs the garage charges the same price for a vehicle that takes up 1/10th to 1/4th of the space. Later, the garage "updates" its crappy equipment and, now, motorcycles are banned altogether.

If you ever wondered why I think corporate America is mismanaged by complete idiots, this one be one of a million reasons. There is no Dummies' Guide or Complete Idiot's text written at a level low enough to reach this kind of moron. This is the kind of business that actively goes out of its way to alienate customers and, then, asks for government assistance when it goes broke.
Posted by T.W. Day at Thursday, September 03, 2009

I agree with you. I don't understand why so many ramps are so anti-motorcycle when it seems like they'd make more money by being slightly more two-wheeled friendly.

Hi Tom,
When I started looking at this a few years ago, it's what I found. It's part of what we are up against...

In this particular issue of their newsletter, the two headlines are about buying a raffle ticket to win fifteen thousand dollars "in cash!", and signing up to play golf. These people are not the most imaginative or artistic or philosophic. They are about money, power and control: first, middle and last. Right and wrong?...I think we'd get blank, uncomprehending stares from this group. The association of people who build, run and operate parking ramps seem to be the opposite motorcycling transcendentalists.

I think it's a national disease. When I was in the medical device industry, I found the same motivations from practically everyone in the "business." Doctors, executives, sales people, and engineers, all, seemed to care only about what they could take from patients. When everyone is out for themselves, no one is looking out for the nation. The only cure for greed in this country has always been catestrophe. The robber barons took the nation to its knees in 1895 & 1929 after which citizens got involved in their government just enough to apply a mild correction to the corporate decay. The current depression might provide a little redirection, but corporate media is so powerful today that I have low hopes for a reality check.