Cheap Bike and Me: Poscript 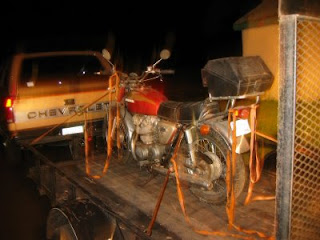 Remember the category my Honda won at the MMM inspection, "least likely to be resold"? Yeah, thanks for the curse guys.

The first buyer of the CB450 was willing to take the bike away before the official title arrived. A couple of weeks later, the title showed up and I mailed it to the address he had provided. A month later, I got a call from the buyer claiming he'd never received the title. I don't know about you, but I don't have much trouble with the USPO and always doubt folks who claim "the check is in the mail" or "it must have gotten lost." However, he was trying to sell the bike and wanted me to help with getting a new title. Since we're talking about a $250, 38 year old dead bike, I wasn't particularly motivated to put much time into that project. I offered to meet him at the Roseville DMV if he ever managed to make it to our area.
In February, another guy called claiming to be the current owner of the CB and hot on the rebuild project. I made him the same offer. In April, yet another new owner of the POS called with the same story.
You know the "6-degrees of separation" theory of how we are all connected? I figure by the end of 2009, I will be directly connected to every person on this planet through that POS Honda. Great. Just how I want to be known. I am probably the one guy on the planet who absolutely hates old street bikes, Japanese or otherwise, and I'll run into some kid in West Buttplug, Montana who will want to talk about the fix he came up with for solving the starter problem on "my" CB450. Someone even tried to connect my Facebook page to a ramshackle Honda CB450 fan club. Man, I disliked that bike when I owned it, but I'm starting to hate the damn thing now.
Posted by T.W. Day at Monday, May 04, 2009