Cheap Bike and Me Part V 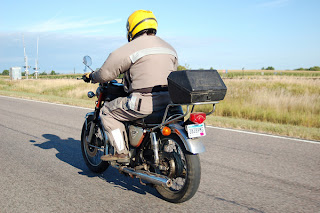 We got to the start about 20 minutes late and frazzled. Lucky for me, Victor and Tammy are terrific hosts and were very patient with the bunch of us. Others were also late. After sign-in, photos, official voting on a variety of topics like "least likely to be resold" and "best accessorized," and a lot of BS'ing, we hit the road toward Appleton.

The CB450's steering was really unstable at any speed under 25mph and over 55mph. Sort of like a vicious radar monitor, the headshake kept me in a tight range of speeds and my hands are buzzing and numb. It takes a constant right hand pressure to keep the bike from making a long, slow right turn. Letting go of the bars with either hand will start up a tank-slapper that will end badly. This leg of the challenge was about 150 miles long. At the first gas stop, in Litchfield, my little Honda had lost about a quart of oil and the engine was too hot to touch. I pulled the oil filler cap with pliers. Just before that stop, the transmission began to stiffen up, making shifting unpredictable and I had trouble hitting 1st gear at several stops. I had a quart of oil in my box and added all of it to the engine to get it back to full. 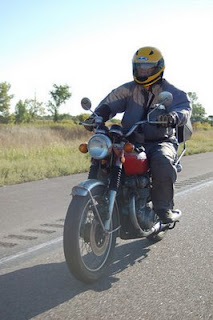 We headed out again, toward Murdock via US 12. At Murdock, I spotted a filling station and stopped to buy more oil, but Kevin, the following truck, and my wife blew by me and turned on a country road and headed south. I gave up on the oil and set out to catch them. My transmission was really stiff now and took careful positioning between gears to be able to shift up or down. We kept going, full tilt to Appleton. The bike was hotter than the first stop and both carbs were leaking, just like normal Kleins. In fact, before I got to the petcock, the right carb was pouring gas on the glowing hot engine. I bought two quarts of oil and a can of JB Oil Leak Stopper. Like the good American I am, I dumped the entire can of JB into the oil filler and 2/3 quarts of oil. For the first two gas stops, the Honda got 32 and 34mpg. From Appleton, we headed to the first Challenge event and a lunch break.

Lunch was fine, with occasional attempts at sabotage from various competitors. That effort was a waste of time, since we would find ways to sabotage ourselves. On the way to the first challenge, only a few yards away, Mike demonstrated his dirt bike skills, crashed on a little hillside loop and gave us a demo of how not to climb a hill with a KZ440. After disentangling himself from the hill, his bike, and such, we all proceeded to the Challenge start. 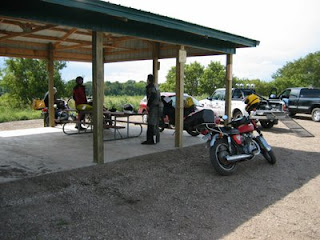 The ORV park had what Victor called "an enduro track." We were all supposed to make one practice and one timed lap around the track for Challenge 1. I watched a kid on a modern dirt bike do the track and got an idea of the track's difficult sections. My Honda wouldn't kickstart and I had to put the fuel petcock in reserve and bump start it rolling it down the hill toward the track. After Lee snapped off his custom footpegs on a jump and Mike crashed on the first jump, I took the first full lap around the track. My bike stalled on the first corner and took a dozen or so kicks to bring it back to life. It stalled, again, before a big jump near the end. Again, I kicked the snot out of the bike before it fired up. When I got to the end/start, I decided to go before anything else happened. So, I took the first timed trial.

To keep the motor from stalling again, I stayed on the gas a lot harder than I'd planned. My plan was to avoid getting any air because I figured the frame would break in half, but the stall-avoidance plan overrode the frame conservation plan and I booked a little quicker on the first two jumps than my plan, but the bike stayed together. Plowing my way through the first turn, I was embarrassed that I didn't have the balls to do any damage to the berm. Pulling out of the curve, I lined up the the first whoop and hit it squarely. I heard a crunch when the back tire hit ground and expected to come to a crashing halt on the upside of the 2nd whoop. When that didn't happen, I realized that my Sears tailbox had popped open and dumped my gear on the track. The crunch was my gear and the box lid hitting the ground. So, I kept going the way I'd been going. I suspect nobody ever hopped the track's whoops any lamer, but I managed to clear each whoop and land as lightly as a CB450 lands on the upside of the next upslope.

Through the whoops, the track took me through a trio of nicely bermed curves, which I took sitting down and at a comfortable speed, steering with the rear wheel. The exit of the curves led to a long uphill and a bigger dropoff. Again, I tried to minimize my air time, but drifted all the way down the hill before both wheels touched ground, more or less together. Not much impact, but enough to bottom the suspension and shake up the bike pretty soundly. All I had left was a bumpy straight back to Sev.

When I finished the lap, I parked my bike and walked back to pick up my stuff. On the way to the whoops, I watched some of the local guys on real (modern) dirt bikes. They got a lot of air on the jumps, but practically stopped on the banked curve before the whoops. Two of the four avoided the whoops altogether and one of the two who did take my route didn't do the whoops much quicker than me. I felt better about my performance. 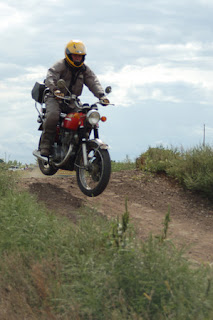 As I was picking up my gear, I found three 10-12" 1/8" pieces of all-thread that had been stuck into the track. They were bent over in the track's direction of travel, so they had once, obviously, been placed like spikes to catch a tire or rider. A little pissed, I pulled them out of the track and tossed them into the grass outside of the riding area. Real dirt bikers walk the track before they ride it and this is a reminder of another reason why. I found my gear, piled it all in the box lid and hiked back to the Honda.

The other guys took their laps and we gathered at the top of the hill to hear our scores. I won. Lee came in second, Kevin was third, and Mike played it safe and came in last. Pretty cool, huh?


(NOTE: All of the in-motion photos in this entry were provided by Gus Breiland, including the in-flight photo on the right. Thanks Gus.)
Posted by T.W. Day at Sunday, January 11, 2009