Cheap Bike and Me

If you know anything about me, you know I"m not a big fan of ancient technology. I'm not one of those geezer bikers who rants about the good old days when motorcycles were unreliable and only super mechanics dared to ride across the street without a following pickup. I like new stuff. My 2000 Kawasaki Super Sherpa is about as old a bike as I want to own. It's carburated and that's about as far back in engineering time as I'm interested in tolerating.

So, when my Minnesota Motorcycle Monthly editor sent an email, last July, asking for volunteers for a Cheap Bike Challenge, I expected to be riding an 80's bike, at the oldest. If anything had gone right, I would have been.
The other "competitors" got a big jump on me. I probably should have passed on being a competitor at all, since the contest deadline conflicted with my 2nd annual "big ride," this year to Nova Scotia. My ride plan put me on the road August 1 and got me back anywhere between August 20th and the 30th. Tight schedules are not my deal. July 4th, Victor announced the competitor list and, surprise, I was one. I spent most of July getting my V-Strom ready for the trip and the rest of the month finishing up my work at school, my day-gig, for the semester. My mind was on the trip, though. 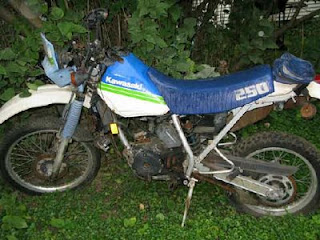 I checked out a few bikes before I left, but the best prospects disappeared before I could get to them. Most of the under-$300 ratters couldn't have been restored for anything less than an additional $300 in parts. My great, green hope was a KLR250 Kawasaki with a "new" motor still in the box. I really wanted a small single for my budget entry and this sounded perfect.
When I saw the KLR, all hope died. The motor was in a box and had been stored under a picnic table for several years. It was rusted and seized. The rest of the bike had seen better days, although maybe not in my lifetime or in its current incarnation. Wiring dangled from the frame in almost every location. The tank was full of rust. Still, the KLR was still tempting, because I really like the 250 and have wanted one since they came out. If I had all summer to fix it up, maybe. But I'd have about two weeks, max, when I got back from Nova Scotia.
I left without a rat bike on line about on my trip east. Being saddled with traditional Midwestern Guilt, I thought about the Low Buck Challenge all the way around the Great Lakes and back. Having volunteered for this event, I didn't want to completely blow my side of the bargain. It would be one thing to find a bike, get it running, and have it die on the way to the contest starting line. It's another to not even have a bike to fail on. From Minnesota to the furthest eastern point on our continent, I thought about a solution to the missing rat bike. 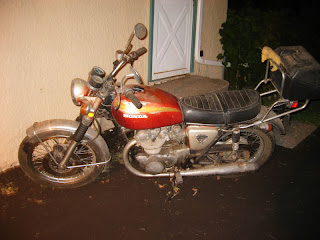 Thinking/worrying about problems you left at home is insanely unproductive and I have to admit that it wasn't the first thing on my mind each morning as I set out to explore the east coast.
As soon as I got back, on August 20, I started looking again. The story of how I ended up owning a 1971 Honda CB450 (pictured at right) is a story of betrayal, heartbreak, torture, setbacks, mental retardation, disappointment, poor mechanical skills, inept planning, idealistic foolishness, and an example of having far too few friends in low places.
Posted by T.W. Day at Sunday, September 21, 2008