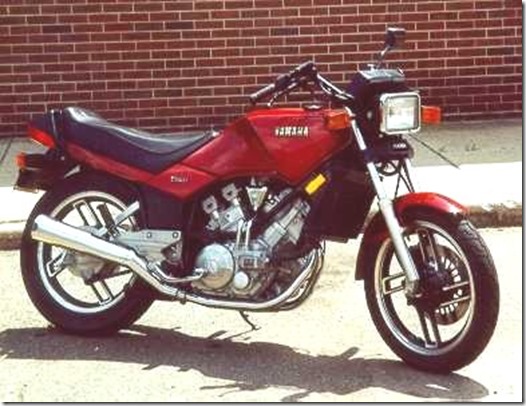 The Yamaha Vision was a great bike, for me. The picture above isn't really of the bike I owned. I snagged this picture from the Yamaha Vision Users webpage, because I never, ever, took a picture of my own '82 Vision. I can't explain why. (There's no accounting for when and why I might use a camera, because I really disliked taking pictures at almost any time. In the digital world, that's changed, but the hassle of carefully handling film and delivering it to a store for developing just didn't interest me.) My own '82 Vision had a Rifle fairing, which made the bike extremely comfortable and provided decent protection from rain and weather. Otherwise, it looked exactly like this bike. Bone stock. The only other modification I made to my '82 was a tapered headstock bearing to calm the bike's tendency to shake at higher speeds.

I owned this bike in Southern California, where it was an excellent compromise between road-worthiness and maneuverability. The Vision is reasonably light, moderately quick, powerful enough to carry two comfortably, a fuel miser (>55mpg for an easy 200 mile range), and has a narrow engine and transmission that is ideal for California's lane-splitting tactic. The motor was exceptional smooth and reliable and the riding position is a slightly aggressive mostly-upright neutral standard posture. The Vision was a terrific commuter bike.

A lot of the bad rap on the Vision was unearned. Some folks complained that the stator was under-designed and burned up easily. I put a lot of miles on two of these bikes and never had that problem. However, I am a believer in engineering specs and the standard text on lead-acid batteries gives them a two-year expected lifetime (regardless of warranty BS). I was religious about abandoning batteries on my Visions, as regularly as possible, every two years.

Another "flaw" was the starter O-ring. When you overfill the oil (even microscopically), this O-ring wouldn't stand up to the minor change in pressure and oil would flow into the starter motor. This happened on both of my Visions and I had the starter rebuilt each time.  After rebuilding the starter, I replaced the Yamaha O-ring with a comparable, but slightly heavier/thicker, part found at a local auto parts store and never had the problem again on either bike.

The final glitch in my Vision ownership was head-shake at medium speeds. It took a while to get decent advice on this, for the '82. A great mechanic, who was the head guy for Beach Yamaha in Huntington Beach, CA, recommended changing out the head bearings with tapered bearings. He did the work, on both bikes, and that permanently solved the problem.

I put about 60,000 miles on the '82 before selling it to a friend of a friend. It was still in great shape and ran flawlessly. The new owner promptly smashed the Rifle fairing with his garage door. He, mostly owned motorcycles for the pleasure of having possessions, so, for him, the bike was ruined. I doubt that it ever left his garage until he sold it. Weird.