"For Sale: 1984 Yamaha Riva 180cc Scooter "This is an unusually well-preserved 25-year-old scooter. The original owner kept it in storage in his basement for 20 years before deciding he no longer needed it. He'd stored it on blocks, with the tank drained, and the battery removed. I bought it last year for my wife (who decided she didn't want it), cleaned up the carb a bit, installed a new battery, and it has sat in the back of my garage ever since. I've taken it out for short test rides, twice, since I rode it home. The scooter has only been ridden 458 miles in 25 years!

"The body has a few scratches, all from the previous owner hauling it up and down his basement stairs. It is roomy enough for two, including extremely comfortable passenger pegs and a large seat. Everything on the bike works. It's very cold-blooded and requires some careful throttle operation until it warms up. Once it's warm, it has loads of power. I weigh 200lbs and it will haul me along at 55mph without much effort. The tank is clean and rust-free. The tires look good, are unweather-checked, but old. It looks and runs like a bike that has barely been broken in."

That was my Craig's List ad from last fall. Two days after running the ad, the scooter was long gone and scooters were out of my life forever. There was nothing wrong with the scooter that a couple hours of loving care and carburetor cleaning wouldn't have fixed. After I worked on it at the end of the previous season, it ran like a champ after a couple of blocks warm-up. In fact, it probably ran too well for my limited mental capacity.

The problem is/was that I'm not bright enough to take scooters seriously. I take some consolation in the fact that I'm a long ways from alone, when it comes to scooter idiocy. Based on what I see on the road, nobody takes scooters seriously. When I visit my grandkids near Dinkytown and UofM, I see dozens of supposedly intelligent, supposedly-educated young scooterists blasting around town practically bare naked. Scooter protective gear appears to be a backwards baseball cap, flip-flops, shorts, a tee-shirt and a sweater tied around their waist, and a backpack stuffed with a Mac laptop and a bunch of college-kid-crap. On the rare instance when you see a helmet on a scooter pilot, even more of the rider's body will be exposed as if to apologize for the helmet.

The other day I saw a pair of kids on a scooter, both were wearing helmets. The guy was shirtless and his passenger's halter-top was so small and thin that I think I got flashed as they rode past. It was nice of her to give an old guy a peek, but I hate to think of what the paramedics are going to have to look at. 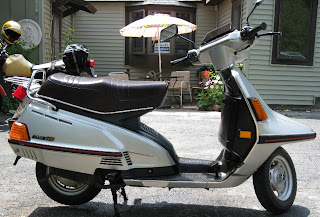 The last time I put the Yamaha scooter on the road, was early in the spring the year after I'd done a little carb work. When I finished the work the prevous fall, I started it up, blipped the throttle a couple of times and let it idle a while to run Stabil through the system, and put the scooter away for the winter. One Saturday afternoon the following spring, I was working on my bikes and decided I needed to make a parts run.

The scooter was there. It fired right up. I jumped on, wearing sunglasses and my garage mechanic outfit: you guessed it, sandals, shorts, and a tee-shirt. But I was only going a few blocks, right? I got the parts, came home, emptied the parts out of the scooter's tailpack, and decided to "test" my scooter repairs a little more by going out to grab lunch. As I was sailing around Gervais Lake, it occurred to me that, "I'm freakin' naked on this thing."

I could have turned back to gear up like a real motorcyclist, but I had absolutely no feeling that I was on anything but a toy and, therefore, had no need for real motorcycle gear. The 180 Riva will comfortably do 55mph. I can tell you from bicycle experience that falling on asphalt at 5mph will shuck your corn. Falling at 55mph, "protected" by your underwear, from a hippobike, any kind of motorcycle, a 180cc step-through scooter, or a bicycle will remove skin all the way down to the bone. Still, there is nothing in my experience that convinces me that a scooter--a vehicle that you sit on like a lawnchair, feet in front and resting on a platform, with a foot brake and an automatic transmission--is a "real motorcycle." I get the same not-a-real-motorcycle impression riding a cruiser with floorboards. That riding position feels so . . . goofy, that I can not take it seriously. If the little Riva could have done 90mph, I'd have felt the same about the hazard it presented.

So, I did the thing that any dumbass should do when said dumbass discovers he isn't bright enough to deal with reality, I decided to remove the temptation. Of course, I know scooters don't kill morons, morons kill morons. However, a moron with a scooter is damned likely to get killed.

The scooter went on Craig's List the day after my 61st birthday. It was my birthday present to myself. The way I looked at it, selling the scooter increased the chances that I'd see my 62nd birthday by a factor of some-really-big-number.

If I rode just to go places, I'd have a big 'scooter'. I really quite enjoyed my ride on Paul Blezard's Yamaha T-max (the Mk3 I think, he's got several!).

I wouldn't touch anything crippled with a foot operated rear brake though. That's a bit of American legislative idiocy far worse than mandating a right foot rear brake on a motorcycle. If you going to pass a law on which side the brake should be, at least chose the side that makes the most sense from a motor cortex point of view!

Congratulations on the honesty. As the rider of a Yamaha Majesty "maxi scooter" (400cc, 95mph top speed) who habitually wears full gear year-round (helmet, boots, gloves, Roadcrafter suit), I am constantly berated and ridiculed for "wearing all that stuff" when I'm "just riding a scooter".

Road rash is road rash, no matter what you fall off of.

You're the smart guy. Caring about "looks" at my age, weight class, and general appearance is beyond dumb. I'm not sure I did that, but I do know I didn't take the Riva seriously. The road, however, would take serious chunks of skin from me without a thought.

Dude, you have to put these two pictures on a T-shirt and wear it when you're out with your son. said...

I enjoyed reading about your Riva scooter. But I'm glad you got to see for yourself how FUN and ADDICTING these little japanese scooters really are. My current ride is a '96 125 Riva and its a hoot. I've caught myself wearing shorts and sandals a few times--it just feels so nice in the moving air. But I'll only ride residential streets like that.

Having hit the pavement at 5mph from a bicycle, I'm unconvinced riding "residential streets" without decent gear is a good move. That logic is exactly what convinced me I wasn't bright enough to own a scooter. I never do that on my 250 motorcycle, but I sure screwed up often enough on that scooter.