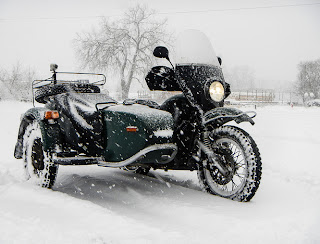 A friend, http://www.everydayriding.org/, has been committing to three wheels (Ural) for most of his winter commuting. I get the desire to stay out of cages, regardless of weather. I'm not sure I'm man enough for the "competition" on Minnesota streets for the first few weeks of real winter.

"Minnesota Nice" has been contaminated by a small number of drivers who believe their lack of planning and skill should be a problem shared by all. On my way to work yesterday, a douchebag in a Nissan sports-mobile of some sort decided to slow to a near stop in the far left, fast, lane of I35E southbound (right at the exit for I94 eastbound), make a 90 degree turn in front of on-coming traffic across two lanes, stop in the snow packed median and wait for his opportunity to dive into fast moving traffic to get to one of the far right lanes heading in the opposite direction (I94 westbound), I don't miss a lot about California, but I do miss living where this moron would have been shot dead by at least a dozen passing motorists for making half of that many arrogant, stupid, incompetent moves on any southern California freeway. As usual, the MNHPD cruiser behind me ignored this idiot on his way to the donut shop. Actually, Minnesota cops are among the worst and most arrogant drivers in the state, so he probably thought that was a perfectly normal maneuver.

On the way home, stupidly on Rice Street (thinking that I could avoid some of the high speed foolishness from the freeway), a Green Taxi driver had slid across the road into opposite traffic, coming to a stop against the curb and facing the wrong way into traffic. Without a thought in his head, he dove right back into traffic, the wrong way and without enough traction to get out of anyone's way. He caused traffic to backup for a couple of blocks in both directions while he spun his wheels and wobbled back into his intended lane. Again, where are the road rage shooters when you really need them?

Nearing the top of a hill just south of Hwy 36, three cars were stuck on the hill after stopping for traffic. All three were violently yanking their steering wheels left and right while hammering the gas in a Hollywood demonstration of how to really get stuck on ice. Fortunately, they had completely anchored themselves to their places on the road, so getting around them on the right was no problem. All-wheel and front wheel drive is useless with an idiot behind the wheel. 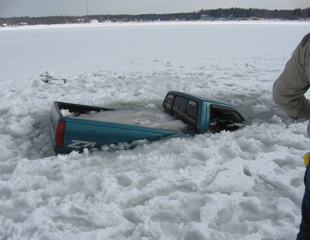 Of course, the usual culprits in big wheel pickups were demonstrating their aggression and incompetence by blasting through traffic on either side, sliding into corners and nearly taking out stopped traffic "in their way." Apparently, the first requirement for purchasing a large pickup is that you have no need for a pickup and no driving skill with an associated unawareness of that incapacity.

When I lived in Denver, the rule was "avoid the freeway until the first couple of ice storms or blizzards kills off all the Californians and Texans." Appears to be true in Minnesota, too.
Posted by T.W. Day at Tuesday, December 11, 2012

And here I thought when peopled lived in snowy climates they knew how to drive in the snow.

Growing up in British Columbia we could all drive in the snow it seemed, but I laugh when we get less than an inch here in Oregon and the schools are all closed and people have chains on their cars.

Same rule in AK, stay off the road as much as possible for the first couple of snowfalls. But then there are the "unstoppable SUVs" that only stop when resting on the roof.

I must admit that I get some sort of weird, guilty pleasure seeing the little sport compacts with the huge tailpipes and fat tires in the ditch every fall.

"I must admit that I get some sort of weird, guilty pleasure seeing the little sport compacts with the huge tailpipes and fat tires in the ditch every fall." I'm with you. I get great pleasure out of seeing those characters stuck in the freeway median a few miles after getting tailgated and passed by the bozos.