I've written before about my friend Scott's troubles with his 1992 Yamaha TDM. That worthy machine finally moved to someone else's hands last weekend. Scott had ridden it from Santa Fe, NM to the Cities and had noticed it used more oil than usual on the trip. The oil use got worse as he crossed South Dakota, heading east. The bike had 56,000 miles on the odometer, so it was due to a valve check and other maintenance and when he had some time to play with it he brought it to my garage and we pulled it apart to do the inspection. What we found was a disaster.

The right side intake valve races were worn to the point that the aluminum had flared on the edges, preventing removal of the valve adjuster buckets. One of the race oil ports was very nearly closed by the wear. Of course, the intake valves were tight due to the wear, with no measurable clearance on that side. The only possible repair for this failure is replacing the head, a project that far exceeded Scott's available time. 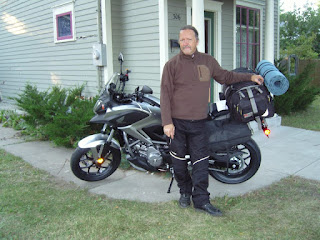 In the end, we ran an honest Craig's List ad, explaining the engine problems and asking for a fair price with that knowledge in hand, and Scott bought a new NS700X. The Yamaha experience probably soured him on that brand and the 66-70mpg he got on the Honda riding back to Santa Fe might have made him into a permanent Honda fan. What didn't happen was all of his TDM problems souring him on motorcycling. He is, obviously, still a two-wheel guy and one of the most resilient people I know.

The TDM vanished from my garage last weekend while my wife and I were wrestling with my father-in-law's messy affairs and I fully expect to see the bike's good parts show up on eBay any day now.

My best guess is that something blocked the oil flow to the right side of the cylinder head. I don't think the wear we saw blocking the intake valve race happened first. There was no obvious scoring on any of the races or the camshaft, no sign of heat either (no darkening of the aluminum race or the camshaft), and it just looked like too much pressure had squashed the races. Obviously, wear had done that damage, but the lack of scoring or burning overwhelms my ability to diagnose the original fault. Scott thought the engine had a different sound over a portion of the trip and admitted that he might have run the bike with the low oil level for a few hundred miles. That is only a serious problem on a dry sump motor if the level becomes low enough that one of the pumps is starving, as best I know. Still . . . I put almost 100k on a TDM and 60k on another without any serious problems and with only needing to adjust the valves once on the two bikes. Scott's bike did not receive much love before he bought it and we have no idea how stupid the previous owner may have been. We do know how devious he was.
Posted by T.W. Day at Sunday, August 26, 2012