I had the pleasure of riding a spanking new Honda CBR250R for 100 miles this past week. This is the epitome of modern motorcycle engineering--fuel injection, water cooled, single cylinder, long maintenance interval, high-tech electronics--in a small package. Exactly the sort of package that is selling in large quantities all over the newly-industrialized world. 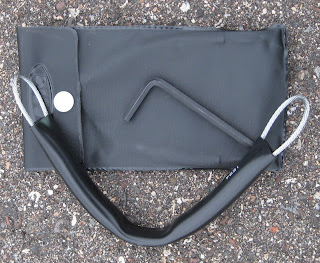 Everything about this motorcycle is likable, except the tool kit. That's it, to the right. An Allen wrench and a helmet cable.
When I mentioned the undersized tool "selection" to Dean Cross, Motoprimo's Off-Road Product Manager (who is a cruiser-riding-only guy, which is another confusing topic altogether), he joked that the CBR didn't come with any tools but that they'd scavenged this tool bag from a Harley. After I failed to get the joke, he asked, "What would you do to this bike?"

I started listing the things I do with tools and motorcycles and he interrupted me by saying something about me being old, unusual, and out-of-touch with reality. Apparently, modern people don't work on their own motorcycles. I really wanted to argue with him, but I had nothing to work with. At the music school where I teach, many of our students are incapable of properly tightening a microphone stand's parts without accidentally disassembling something in the process. If that something actually falls off, they will stand fixated by the reflection of the dropped part like a deer trapped in headlights until I show them how the part is reattached. These are, mostly, not stupid kids, but they are mechanically clueless.

Some time ago, in an interview with Kevin Cameron, Kevin said "every new entering freshman class has better keyboard skills and more math, but they are less prepared to deal with the physical world. When those people become engineers etc. and go on the job, they have to go and do the playing that they would have done when they were 12 or 8 or 16. They do it on the job and some pretty ridiculous things come out of it. But in the end, the same function is performed, namely, the person gets squared away with physical reality." In my field, I don't see either the improved keyboard skills (unless illiterate texting counts) or improved math capacity, but I can only hope that is the case for engineering students.

In response, Honda created a small motorcycle with large maintenance intervals and assumed that even this fairly simple motorcycle would receive all of its service care at the dealership. Where those high quality dealership mechanics are going to come from appears to be an item of faith or wishful thinking. 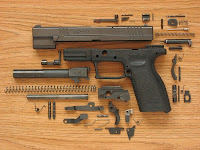 I wish I could claim this idea for my own, but it belongs to Dean Cross. He suggested that all of modern experience comes from video games, so video games ought to provide some value to society by including technical demands with the mayhem. For example, before you can pillage an Iraqi village in Gears of War or Battlefield or Call of Duty you have to disassemble, clean, and reassemble your weapons (like basic training). Occasionally, your weapons will jam in the battle and you will have to fix them while ducking for cover. Motocross Mania, MotoGP, and the like are obvious candidates for a little maintenance reality check. Tires should be replaced between races at the dead minimum. Force players to actually figure out how to slip a door lock and hot wire a car to go anywhere in Grand Theft Auto. Make up your own list of games that need to reflect the physical world. If you play video games at all, I'm sure your list will overwhelm mine. I had to go to Amazon.com to find the names of any of this stuff. Hell, I might get interested in video games if the games actually required a little thought.

I don't, however, have a solution for stupid games like Guitar Hero. Just pick up a real guitar and learn to play music. Pushing buttons on beat is the definition of "lame."
Posted by T.W. Day at Wednesday, September 28, 2011

I find the rule with tools is that whatever breaks will only be something that you can't fix with the tools or parts you are carrying. So I suppose it is worthwhile to carry lots of tools and spares to help eliminate the number of things that can break. Frankly, about the only tool I ever use in my tool kit is the thin wall spark plug socket, but I suppose it is nice to know they are there if I should ever need them.

KTM is the only one I know of that gives you a real tool kit (with real tools) with enough to do most of the maintenance and repair, but they expect a level of owner involvement. They even give you a bottle opener for that adult beverage when you're done! BMW's kits used to be amazing, the new kits are minimal but the bikes have become non user serviceable, other than oil changes. I think most new bikes are sold with the idea that most people have no idea what they're doing, so why give them the opportunity to make things worse.

Just a thought but new cars don't come with tools (execept for tire tools). So is that the only thing that breaks on them? BTW All the bikes I've ever owned did come with a POS emergency tool kit at least better than the CBR. I'm looking forward to what your thoughts are of the CBR250.

I carry a pretty substantial tool kit when I go anywhere on my bikes. I have always found a use for all of the tools I pack and usually find a need to add something else to the kit when I get home. There is a Murphy's Law aspect to tool carrying though.

I haven't owned a new car since 1973, so that's news to me. My newest cage is a 2000 Taurus and it had a fairly useful tool kit that I added to substantially and my wife promptly lost.

There used to be a manufacturing rule that said something like "you get what you expect" from employees. I wonder which came first, customer incapacity or manufacturer expectation of incapacity?

I'm not quite one of those new-style owners, but I'm closer than I like to admit to. I know how to do some minimal emergency repairs and maintenance, but for the most part I have things I'd rather be doing with my time. That said, if they're not going to include the tool kits, I'd really like it if they'd stick to using standard-size fittings and fasteners! I have a 2007 Honda Rebel, and the "tool kit" is a double-ended screwdriver. I ended up using an old strap wrench to adjust the shock pre-load settings, since it calls for a special wrench I'd never needed before and didn't own...

I'm also hoping for a column on the CRB250 -- I've been watching it, although I don't much like sport bikes, and it looks like it has possibilities.

As you've discovered, owning a motorcycle is different than driving a cage. It's more demanding, in a variety of skills. Some of us think that's a good thing. Some days, it's less of a good thing than others. Hardly anyone really likes troubleshooting, although we all like the end result. Experienced, talented mechanics bitch and moan at problem bikes until the solution finally reveals itself. Part of going places on a motorcycle is knowing that the chances are you're going to have to get yourself back out of those places.

I test rode the CBR for MMM a few weeks ago. The magazine will be publishing the review in the next issue.