Often, when I'm hanging out with a collection of motorcyclists the conversation gets around to "What bike would you buy if money was no object?" The answers are predictable, most guys go for the biggest, most expensive model they know of. BMW and Motoguzzi1200's, Aprilla and Ducati liter bikes, HD and Victory hippo bikes, Goldwings, Concours, and Hayabusas often top the lists. 600 pounds seems to be near the low end of the average dream bike mass. I, clearly, don't dream big (or heavy) enough. My dream bike would weigh no more than 250 wet pounds (wet), be fuel injected, be road and off-road worthy, and would reliably tolerate long highway hauls loaded with gear.

Right now, the only bike imported into the US that gets close to that set of specifications is the Yamaha WR250R. I don't know about the WR's reliability, but almost everything else about the bike is aimed right at me. The $6100 price tag is out of my range, but I can wait for a reasonably priced used one to drop into my lap. I always do. The WR is a little tall for me, but I can deal with that, too.  The 2-gallon tank is a problem, but there will be aftermarket solutions. Owning a WR would be an excuse to exercise more, lose weight, and maintain what flexibility I still possess. An advantage of dreaming small is that my dream bike is a lot more likely to fall into my lap than is a $20k+ pipedream that I'd be afraid to ride where I am likely to want to go. At my age, practical dreams are more interesting than impossible dreams.

One of the few MC industry rags I read is Motorcycle Consumer News. Every year MCN does a "performance index" rating of every recent motorcycle they have tested, and is sold in the US. Every year, the performance index produces the same winners and losers in their five-ball "MCN Rating system." The only under-1000cc bike to receive an "excellent" rating was the Yamaha FZ6R. Every other top rated bike was 1000-1200cc and all but one of their winners gets the kind of fuel mileage you could expect from a mid-sized sedan. "Performance" is obviously a tricky word. Like beauty, it's all in the eye of the beholder, but since we've all experienced $4.50/gallon fuel--and we know we're going to see it again--it seems to me that economy ought to be rising to the top of the priority list of performance specs. When that doesn't happen, I suspect that some reality-disconnect is going on in the evaluation system.

Since I commute on my motorcycles, I care about mileage as much as any other performance measurement. The 2006 Ninja 650R got the decade's all-over best full-size bike mileage at 65.4mpg and that model came close to an "excellent" rating (four and one-half balls) for the year. The same model dropped 10mpg the next year and its Versys cousin is 20mpg less efficient. The Yamaha XT250 knocked down 67.8mpg in their testing and the WR's are 10mpg under that with substantially improved performance. So, one big thing I care about is sort of covered with the WR250X.

The fun-factor is really going on with the WR. Supermotos are the most amazing motorcycles to put on a track, practically all kinds of tracks. They turn like bobcats, stop on fractions of a dime, go fast, go anywhere, and look cool. Yamaha says the WR is, "The cure for the common commute."

The only thing the WR doesn't have is bigness. In our crazy country, big is better. The WR is small. Tiny, almost. I don't know how well Yamaha is doing with the WR250's, but if history repeats itself I'd be amazed if they are selling well enough to justify importing them for more than a few years. That means new prices will fall, used prices will fall farther, and you could have bet your birthday dollar that I'd own one before too long.

All this internal rationalizing went on while the other guys were discussing their dream bikes. When I was asked about my choice, I coughed up the WR250X and almost nobody knew what it was. Everybody knew it was a "wimpy" 250, though. That was enough to get the jokes flowing. "Why not just get a bicycle?" "Two-fifties are girls' bikes." "Beginners' bike." And so on. 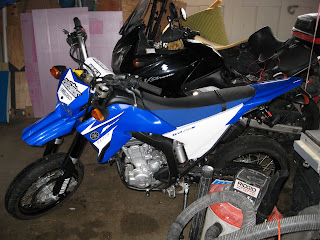 If bigger is better, we have an explanation for our fascination with obesity. The bigger we get, the bigger our bikes need to be. I suspect that logic is unhealthy. I'd rather look oversized on a small bike than right on a hippobike. Even more important, I'd rather be able to take my little bike places where I'm disinclined to walk or drive a cage. So, I'll put my WR250X "girl's bike" against your liter sportbike or your hippo-bagger any time, as long as I get to pick the course. I'll choose a few hundred miles of dirt road with a few sand and mud sections thrown in for entertainment. If you make it to the end of the route, I'll be waiting for you with the next section all picked out. 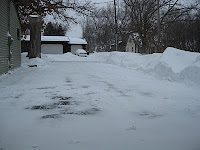 This week, I snagged a used WR250X for the kind of price I wanted to pay and in reasonably wonderful condition. The view outside my garage is still depressing and will probably remain so for a few weeks. So far, this is the 2nd snowiest winter in recorded Minnesota history and we have 7 days left to "enjoy."  That's ok. I need to install a lowering link on the rear suspension, take advantage of Yamaha's 1" suspension drop, and sort out the tires (apparently, Avon Distanzia DP tires are the deal for me). The previous owner was one of those vile people who actually has legs and working body parts, so he'd set up the bike for his 36" inseam. I need a ladder to get on the bike and I dismount like a pony express rider. By the time the snow melts and the roads thaw, I'll be ready to ride.
Posted by T.W. Day at Monday, February 21, 2011

Congrats! I look forward to hearing about your adventures with the new bike. One thing I would add about a lot of guy's dream bikes is that they are so expensive and so desirable to others that they are also theft magnets. I bet a lot of folks that own one of these dream bikes are afraid to take it anywhere they have to park it out of their sight. To me that's a big limitation.

I've been told that dreaming big is the way to get what you want from life, but that hasn't done much for me. Dreaming practically is more my style.

Most of my bikes have been the polar opposite of "theft magnets." In fact, you might call them thief repellents. I'm good with that. I go places on my bikes. I can't be thinking about who's out to steal my bike or stuff and enjoy myself, too.