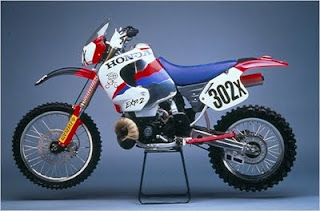 My #8 favorite is so similar to my #7 that some of you probably think I'm slipping past senile into retarded. Could be, however, to me the two are radically different. For one, the Honda EXP-2 is made of unobtainium.

Back in 2003, Honda was set to storm the off-road world with a 2-stroke that did everything 2-strokes supposedly can't do. Sure, the 400cc single made big power, 54hp with 58 ft/pounds of torque, but it did it with scarce emissions and terrific fuel economy; two characteristics unknown to 2-strokes. The links at the bottom of this article take you to places where a lot more information is held. These guys even got to ride the EXP-2, something I'll never do.

You can find the specs on Motorcycle.com's Quick Take: Honda EXP-2 and Honda EXP-2: The Return of Two Strokes? Their stories only makes me jealous that I don't have serious connections to the world of motorcycle development. This was one cool motorcycle that could have meant a radical change in motorcycle technology. In 2002, Honda won the under-500cc class and the Experimental class and came in 5th overall at Granda-Dakar. The bike made the same torque and nearly the same horsepower as the 780cc 4-stroke twin Honda had been racing, but was 118 pounds lighter.
In 1998, Honda anticipated this would be a production bike by 2000. In 2003, it was on its last legs even while Honda was promoting the technology to magazines and events. Then . . . poof! It was gone. Mostly, I love the bike because the leading-edge technolgy Honda was working on. Too much of motorcycle engineering is about yesterday's styles and technology that's long been applied to cages and lawn tractors (fuel injection , electronic ignitions, electric motors for example). The EXP-2 was an attempt to do something first in a motorcycle motor. I can't remember the last time that happened.
Here's the rest of the list, so far:
Posted by T.W. Day at Thursday, August 06, 2009