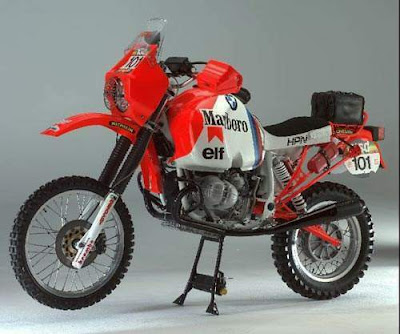 If any vehicle ever "proved" that "beauty is in the eye of the beholder," I think the 1980 BMW R 80GS Dakar is the evidence. To me, everything about this motorcycle screams "ride me somewhere nobody else can go!" I'm not exaggerating when I say that this bike is my standard for motorcycle style and beauty. Yeah, I said it, "beauty." I love the wayt this bike looks. If I could ever afford one, I might swear off owning any other motorcycle ever again. To my eye, no street-legal poroduction bike even comes close to being cooler than the R80 G/S Paris-Dakar Special.

The incredibly basic air-cooled, twin-cylinder horizontally opposed Boxer four-stroke is the epitome of "basic." The motor is a pushrod-lifted, 2-valves-per-cylinder, moderate-compression (9.3:1), fuel-insentive, kick and electric-start 55hp picture of simplicity. BMW bent over backwards to make this motorcycle field-servicable and the field they intended it for can be any place you find yourself stranded.

This 355 pound (160kg) bike is suspended by a pair of Maico forks with 10.6" (270mm) of travel and canted Bielstein shocks providing 6.7" (170mm) of rear wheel movement. The frame provided nearly 10" of ground clearance, which meant a seat height of almost 34" ( a problem for shrimps like me). The small front disk and rear drum brakes are pretty pedestrian by today's super-disk standards, but they worked; wet and dry. 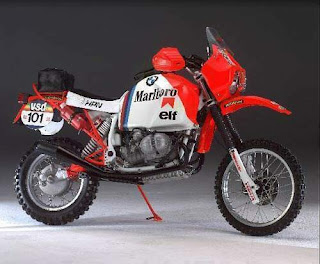 One of my personal heroes, Gaston Rahier, won Paris-Dakar in '84 and '85 on a BMW-prepared version of this bike and the company sold an autograph model called the "Paris-Dakar Special" for several years afterwards. The 80G/S is my favorite of the lot. Part of my bias is that the 80G/S is the only "enduro" BMW ever made that is close enough to the ground to allow me to swing a stubby leg over the seat and reach the ground afterwards.

You could say that it's unrealistic for me to call this a favorite, since I've ownly ridden the bike once in my life and that was a ride that was about as far from a serious dual-purpose test as anyone can imagine. Hell, it didn't even have a full 8.8 gallon fuel tank, so I didn't have the whole "experience" of trying to hoist the real weight of this bike even on my city ride.

I can't argue with or help you there. I have loved the way this bike looks and the way it works since the day I saw a California neighbor pull into his driveway with a pair of used Paris-Dakar Specials strapped to the back of his pickup. With more than a little envy, I will never forget his having found the two 80's for sale in the California desert for exactly the same price ($1600) that I had paid for my crappy used Kawasaki KLR600 that same week. After a year of farkeling my KLR, it wasn't even a fraction as tough, useful, or cool looking as his regularly desert-abused BMWs.

Many of the specs for the Paris-Dakar Special are here: http://www.motorcyclespecs.co.za/model/bmw/bmw_r80gs_paris.htm.

Specs are nice, but this bike simply felt competent from the moment I rode it out of my neighbor's driveway and headed down PCH toward Laguna. If I hadn't been married with children, I might have kept going to Mexico and never returned. My neighbor could have consoled himself over the loss by confiscating my KLR. Sucker.