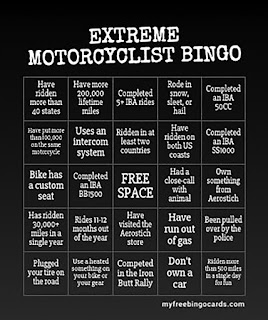 Some of these statements are really interesting; to me. The "Have more than 200,000 lifetime miles" question, for example. Several times in the last 20 years I've tried to add up my lifetime miles and mostly I come away baffled that someone would keep track of that. Fifty years ago, I worked with a salesman who quit his job and bought a Chevy dealership. He was probably 45-50 at the time (really old) and said he'd just past 200,000 lifetime driving miles and since the average American in the 70's drove ab out 100,000 miles between fatal accidents (according to him) he figured his days were numbered. So, he bought a car dealership and quit pounding the miles. About 5 years later, I passed 600.000 miles just from that job.

Around that same time, I guestimated that I had somewhere around 10,000-25,000 off-road miles and I had tested my luck severely and it hadn't been all that great: a dozen  busted ribs, five broken toes, both clavicles broke, both shoulders separated, broken thumb and index finger, and enough other stuff to entertain every x-ray tech who has ever scanned my body. About then, I bought my first street bike and the rest has been mostly uneventful, but I really haven't kept track of the miles I've ridden, ever. Mostly, my count comes from recollections of the miles the bikes had on the odometer when I bought and sold them. With some bikes, that wasn't particularly accurate because the odometers either failed and were replaced or never existed. 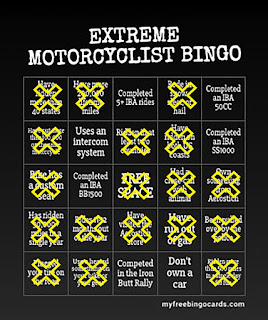 It's cheating, I suspect, to have ridden 12 months a year in California, but I did for 10 years. I also rode 12 months a year in Denver for 5 years, and 3 or 4 times when I lived in the Twin Cities. I could almost claim "Don't own a car," because the car I did own was my wife's for 5 of the 10 years I lived in southern California. I all but forgot how to drive until I bought a 1973 Toyota Hilux for hauling my kayak. The other spaces are just boring "doesn't everybody do that?" stuff. 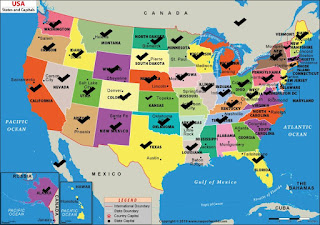 I'd hoped to tag all 50 states before I quit riding, but that may turn out to be a pipedream. There are just a few southeastern states in which I have not burned fuel: 6 plus Hawaii.
Posted by T.W. Day at Thursday, April 09, 2020