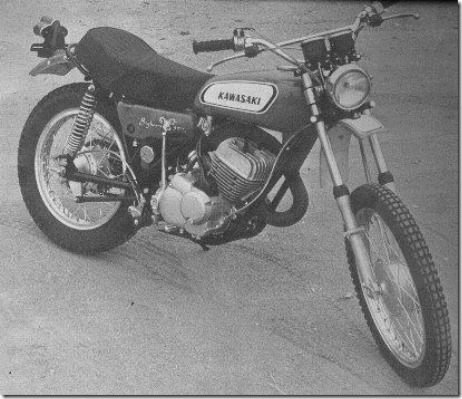 The Kawasaki Bighorn was my first real dirt bike. The link above tells you a lot about this history of this rotary-valved, 350cc two-stroke, 33-hp, 400+ lb. monster. It's important to remember, however, that these guys appear to like ancient motorcycles. What I remember most about my green machine was its unpredictability. The bike would do something different every time you applied the throttle, tried to turn, tried to stop, or tried to start it up in the morning. Occasionally, I felt like I knew what I was doing on this bike, when it went where I pointed it, as fast as I'd intended it to go. Usually, I felt like streamers dangling from the handlebars as the Big Horn rocketed into some obstacle that I'd intended to wheelie over, slid into a low-side because the motor busted the back wheel loose when I thought I had it loaded up enough to guarantee traction, or launched me into a high-side when the bike hooked up when I felt sure I could power through a turn steering with back wheel slip.

I'm pretty sure the Bighorn weighed more than my 1992 850 TDM street bike. It sure handled worse, on or off road. But it did start me off on a lot of years of fun and adventure. And it was a pretty cheap bike to get started on ($300 for a like-new 1971 F5 in 1972). Since I fell down and broke bits of it almost every time I went riding, it was helpful that parts were cheap, too..

The one and only competition I ever attempted with the Bighorn was the Canadian River (Texas) Cross Country Race, in (I think) 1972). I was one of four open class bikes to finish the race, about 30 started as I remember. Because so few finished, the promoter only trophied to third class. All of the other classes trophied to fifth. It was one of the few times I had a chance to leave a race with something more than bruises and stories to tell and I'm still pissed about missing out on that piece of chrome plated plastic. Later, I managed to earn a few ribbons and some tires or accessory parts racing motocross and such, but that race was the last event I rode that actually offered a trophy and the last time I was in a position to earn one.

I moved the Big Horn with me from Texas to Nebraska, but quickly ended up on a Rickman 125 ISDT and the Big Horn ended up in a neighborhood kid's garage after the kid pulled the air filter in a misdirected attempt to "get more power." He got a burst of power, just before the leaned out mixture seized the piston and never managed to find enough money to put it back together. When I moved, the bike was being chewed up by garage mice and I doubt that it ever ran again.

Thanks for this one. Occasionally I start pining for the "good ole days" and it's nice to get a reminder of how fantastic the new stuff really is. To this day, the smell of any two-stroke reminds me of my 1977 Kawasaki KX400. Great engine and........well, great engine.

I do love the smell of Castrol in the morning.

I'm not sure I can go all the way to "love". The smell of Castrol in the morning brings up very complex memories, part of which includes a touch of "I'll be injured soon"

Good point, Brad. Now that I'm old and chronically injured that memory has way less impact. The last time I had that experience was at the Steamboat Springs Vintage Motorcycle motocross in '99 or '00 (whenever the last year for that even occurred). I was practically overwhelmed with good feelings about being outdoors and on a motorcycle. Mostly, my 2-stroke days were pretty excellent.