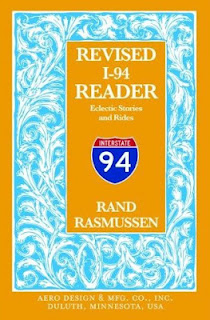 A few days before Xmas, I received a package from the kind and generous folks at Aerostich that contained a motorcycle-themed card and a book, Revised I-94 Reader; Eclectic Stories and Rides. Amazon sells a Kindle-based version of the book for $4 and, I suspect, it is available from Riderwearhouse and old fashioned form. The author, Rand Rasmussen, is a Minnesota guy who commutes big miles for fun and occupation between Fargo and the Twin Cities. He isn't exclusively a freeway rider but he's unashamed of the long miles he puts on Minnesota's east-to-west interstate and in some ways that's a refreshing view of motorcycling's generally accepted disdainful take on freeway riding.

When the book arrived, I was in a poor mind to appreciate the gift. Only a few days away from having the top end of my leg cut off and having had a several-inch titanium railroad spike driven into the hole, my capacities were numbed and dumbed-down. Morphine and I were about to end our unhappy relationship and that would only be replaced with a slightly less miserable fling with oxycodone. My diminished opinion of Rush Limbaugh was lowered several more notches after getting to know his drug of choice. It's obvious why he is so poorly read, neither of those "medications" is conducive to intellectual pursuits. They made me stupid, grumpier than usual, more paranoid than usual, and I suspect even the pain-numbing qualities are overrated.

This week, I picked up the I-94 Reader and passed a brief afternoon with its 64 pages. Rasmussen is not a compelling writer, in my opinion. He overuses the first person perspective, "I had left work . . . I needed to chose between . . . county roads I usually take . . . I reasoned, I would take . . . I was fine for the first ten miles . . . etc." All from one overly long, I-filled paragraph at the beginning of one chapter. There are at least twenty more I's in that paragraph. This only warrants a mention because it became irritating after a few pages. In these days of either no editors in the book stream or working-for-free interns pretending to be editors, we probably have more of this kind of writing to look forward to than less in our futures. The days of Maxwell Perkins are probably over.

However, with that irritant either out of the way or ignored, Rasmussen is often an interesting story teller. He does big miles, "It has been a great riding year for me with nearly 35,000 miles and three Dunlop 491 rear tires to my credit." He is a tough, all-season rider who is neither afraid of sub-freezing weather or night riding. His chapter/stories are often short and to the point and the experiences he describes are personal and sometimes exciting (crazy dangerous). The I-94 Reader is a brief but interesting look into another rider's life and Rand Rasmussen has a lot to say about motorcycling and pushing the boundaries of common sense.
Posted by T.W. Day at Wednesday, February 15, 2012

So on based on your review I pick this book up. Riding and living in MSP for the past 25 years I thought I'd enjoy a 'local' boy writing a book. All I can say is GREAT!!. I really enjoyed this book! I rode from St Cloud to MSP for 5 years and although not as many mile, the experiences were similar. Thanks so mush for reviewing this book.

I'm glad you enjoyed it and I'm sure Mr. Rassmussen appreciates your patronage.

I'm glad you enjoyed it and I'm sure Mr. Rassmussen appreciates your patronage.