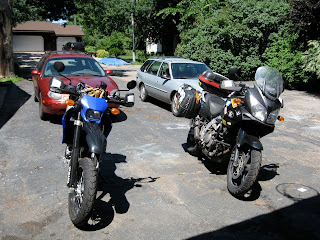 This weekend, my wife decided she wanted to take a short motorcycle trip. Short it was, but it was also informative. We have a moderate armada of vehicles, for two people; two cars and three motorcycles. Since the 250 has been stripped down for one-man (me) touring, the only option of the day was the V-Strom.

It had been a while since I'd fired up the 650, the WR250 had become my vehicle of choice since early April. The little bike is, simply, more fun. It is also dramatically easier to get out of the garage, especially when the garage is stuffed with cars and household crap (see previous post). It's just a no-brainer, especially when my arthritic hips are acting up. Wrestling the V-Strom out of the garage reminded me why I don't ride it much. Loaded with gear, the V-Strom weighs almost as much as two WR250's. The V-Strom is twice as wide, a few inches longer, and the overall feel is "large." 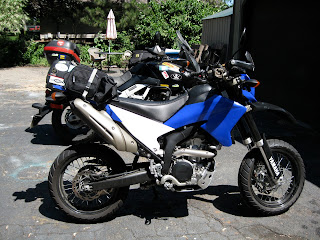 When I used my WR250X in an MSF "Experienced Rider Course" a few weeks ago, my co-coach kept referring to my bike as "Tom's bicycle." Like most of the students in that class, he rides a large liter-bike and, relatively, my motorcycle is a bicycle in comparison. My top speed is about 90mph. His is about 140. His bike is twice mine in every category except engine displacement where it is 4x my engine's size and his engine cranks out that much more power, too. The  students were all on hippobikes, so their motorcycles were even more dramatically different, although not as dramatically different top speed and horsepower-wise.

So far this season, I've put about 3,000 miles on the WR and less than 300 miles on the V-Strom. My brother checked out the V-Strom, again, for a trip to Canada so the bikes' total annual mileage is a little more similar than my actual riding preference would indicate. I, in fact, always pick the 250 these days for everything I do. Unless my trip plans make a sudden change for long distance, it's possible I might end up being a one-bike guy with the 250 as the one bike.
Posted by T.W. Day at Monday, August 08, 2011

I think a lot of the hippo bikers would be surprised how much fun something small and light is.