So, here's my application, Motorex. 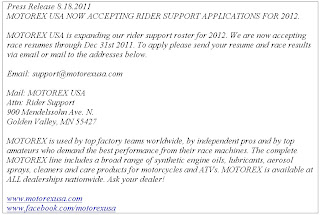 I am a 63-year-old experienced motorcyclists with arthritic hips, worn out knees, and a little extra padding around the middle. In almost 20 years of racing (my last race was almost 30 years ago), I never managed to win a single trophy. Some stupid ribbons, an occasional trophy tire or set of goggles, but no trophies. In fact, the only trophy I've ever earned was a "Spud Award" from a past California employer for being an "unidentified flying object" when I crashed a mountain bike and busted a clavicle and a couple ribs. The only trophy girl I ever got to kiss has been my wife.I'm not complaining.

While I am old, I am also a little slow around the track. About 30 years ago, I crashed and broke all of the ribs on my left side. Since then, I've been a little shy about catching air. I can do it, I just don't like it much. [See left: You may have to blow up the picture a ways to see the actual air under the bike. I've been told a brand new US dime could be slid under that POS Honda while it was airborne. This may seem like sour grapes, but I was trying to minimize the impact because the Honda was falling apart in several directions as I rode it around the track. I have launched my new WR250X a lot further into the air, but nobody has bothered to get a picture of that because they don't want to embarrass Yamaha.]
It's not that I wouldn't like to be fast. I would. Maybe if I had the right oil in my motorcycles I'd be faster. The only way to find out is for you to sponsor me and we'll hit the track together. Me and you and our race bike. What do you say?
I'm not only old, I'm a little lazy. So, I'm assuming your sponsorship comes with a mechanic and a driver and a trailer with sleeping quarters (for me, the employees can find their own accomodations). I'm not broke, though. I am assuming I'll be responsible for my own food expenses. I think that's only reasonable.
Posted by T.W. Day at Thursday, August 18, 2011

I bet I'm just as slow as you, and I was never a racer. But I'll be your co-rider if they'll sponsor both of us!

You're on. I'll run interference for you and we'll knock 'em down when they try to lap us.

since you guys are building a race team, racetech is also looking for riders to sponsor. lol!