I clearly don't understand motorcycle history. Today, I found myself in another discussion about the "rise of Harley Davidson" and that company's misfortunes and fortunes. The HD expert informed me that Harley's fortunes turned around after the terrible years of "AMF's Hardly Ableson" mismanagement. He went on until I escaped about Harley's tremendous advances in engineering in the last decade, but I remain unconvinced.

I've heard that story many times, but when I got home today I found an email from Harley's marketing department in my Inbox that described Harley's race success of the week:

"Harley-Davidson Screamin’ Eagle Factory rider Kenny Coolbeth finished fourth in the opening round of  the Grand National Twins portion of the 2011 AMA Pro Harley-Davidson Insurance Flat Track Championship on  the Springfield Mile at the Illinois State Fairgrounds. The race was won by RogersLake/ Blue Springs Harley-Davidson rider Jared Mees on a Harley-Davidson XR750.

All of the competing Harley riders were on XR750s, one of the company's all time most exciting, successful motorcycles. In fact, other than some Buell models, I don't know if HD even exists in racing outside of drag racing in very restricted classes. The deal is American Machinery and Foundry (AMF) bought Harley Davidson in 1969 and sold the company in 1981 and the XR750 race bike was produced from 1970 to 1985. That means that AMF was responsible for the only successful Harley Davidson race bike ever and that motorcycle continues to be successful against far more modern motorcycles (in its limited class). You'd think, if Harley's engineering and production capability had improved dramatically since Beals and Davidson bought the company, they'd have managed a new race bike by now. Wouldn't you? 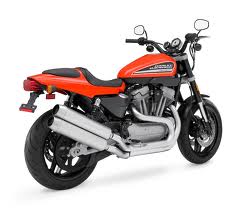 Reagan's 45% import tax on over-700cc Japanese motorcycles gave Harley the opportunity to outsource practically every complicated component on their bikes improved quality, but at the cost of becoming an "assembled in the United States" rather than a "made in the USA" company. Of course, they're not the only company pulling that stunt, but they are the noisiest of the bunch. The closest thing to a replacement for the XR750 was 2009's XR1200, which did a fair job of matching the cosmetics of the legendary Harley but has been a racing bust. With so much of the product being engineered and produced in high tech countries, I will always wonder why they have stuck their racers with a product that should be linked to the period in the company's history most reviled by their fans? Couldn't they get one of their partners to build them a race bike? The XR750 colors and styling are pure AMF retro and while it's still the coolest looking bike the company ever made, its continued support confuses me.
Explain please?
Posted by T.W. Day at Tuesday, May 31, 2011