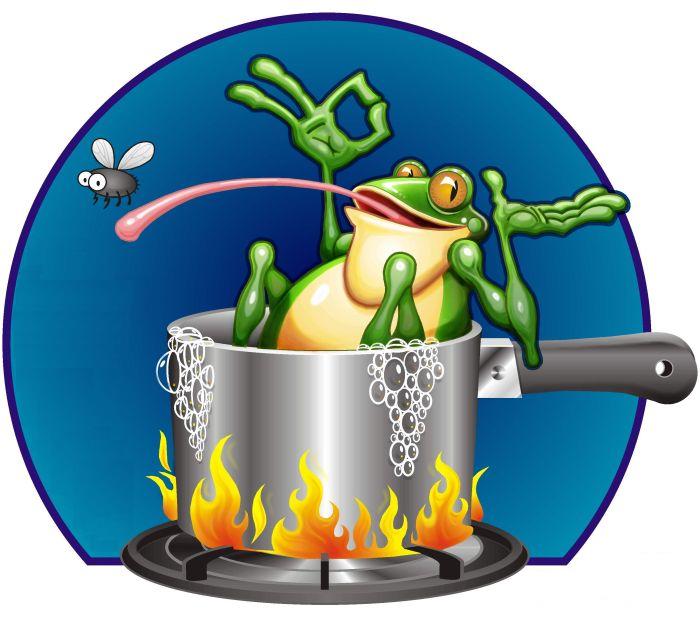 I had my own special boiled frog moment this week and it reminded me of how easily we settle into to what we’re used to and how quickly we can compromise what we think we “like” or expect from things we use. I’ve been riding my 6-year-old ebike (a late-2016/early-2017 RadPower Rover) since my grandson trashed it badly enough to give it to me in late 2018 in pretty much barely-salvageable condition. He’d commuted in Minneapolis/St. Paul for the year he owned the bike, crashing on the icy roads often, doing little-to-no maintenance, and doing the Millennial thing of ignoring problems until they become insurmountable obstacles. (If I believed in an afterlife, I’d be looking forward to seeing how that characteristic plays out in the long run. I’m still betting on robots over humans.) Over a couple of 2018 winter months, I chased down the non-functional electronic causes, repaired and replaced a lot of obvious mechanical problems and broken parts, and got the bike back to working bit-by-bit. One aspect of getting familiar with a complicated product in that manner is that I sort of reset my expectations as each bit “came on-line.”

Since that initiation, I’ve continued to upgrade the bike and maintain it, sometimes discovering problems that weren’t obvious to a newbie early on. The battery had been particularly abused by sub-zero storage and operating-temperature operation along with crash shocks. When I first started riding the bike, I was using the throttle a lot and, as a result, my range was fairly limited. Over the last 4,000 miles, I’ve learned to use the throttle sparingly and to count on the Pedal Assist System (PAS) to determine most of the bike’s power contribution. A couple of years ago, pre-Covid, I was making 40-50 mile trips on at least a monthly basis. In the last two years, a 20-25 mile trip had become my norm for a long ride, with most days in the 10-15 mile territory. Other than putting the bike chargers on a timer, I don’t do anything special to maintain the batteries.

Last week, Mrs. Day gave her 2019 MiniST a battery "test." We were about 8 miles out when she was stung by a wasp. She's very allergic and, I thought, freaked out, turned around and went full throttle back home and to head for our local clinic. My Rover was already down to 3 bars (from 5 on the battery status indicator) just from riding at PAS2 to that point. Mrs. Day is a minimalist and always rides in PAS3 and 3rd gear on the derailleur. To try to keep her in sight, I kept the Rover in PAS3 and pedaled hard. She was clearly running full throttle (20mph) in full motorcycle mode and she vanished into the distance. I figured she was so freaked out that she wasn't watching the battery status, but I was wrong (again). She still had 4 bars on her battery when she got home. I had been on one bar for the previous 4 miles.

I began to suspect that might need to replace my almost-6-year-old, 5,000 mile battery.

After the big wasp run, I “re-engineered" my grandson's discarded Mini battery bracket to mount on the Rover and, now, I have a newer far more powerful battery on the Rover. The Mini battery, when new, has about 150Wh more capacity than the Rover “dolphin” battery. Over the last few years, my range has been steadily declining and shortening my range to the point that I was pretty much starting to think anything over 25 miles was risky.

For the battery installation, I had to drill mounting holes for two of the 3 battery bracket screws (harder than it sounds because the holes also needed fairly precise countersinking to allow for the Rivnut heads on the bottom side of the battery frame. I installed 45A Quick Connectors in a very tight space between the bracket and wiring entry to make battery replacement fairly simple. Time for a test ride.

It’s probably psychosomatic, but the bike feels way more powerful. That could be real because the internal series resistance of the old battery cells has been increasing, which is the actual cause of battery depletion with age. As I mentioned, the Mini battery has about 150wh more capacity than the original Rover battery and is slightly lighter. I came home, after at least 12 miles of PAS3 operation (a total of 18 miles) and a couple of block-long full power uphill runs with 3 bars remaining (while at power). I think Cannon Falls is back in my range. Over the next several days, I took on tougher rides with more big hills and longer trips. It was obvious that the old battery was on its last legs.

It is also obvious that this is another example of how we become used to what we have and if what we have degrades slowly we won’t notice the degradation until we’re either forced to compare it to something similar or we suffer an outright failure.

Having only had an e bike for a few months and lots of winter rain, I'm still in the "figuring out power consumption" mode for various settings and suffering from a bit of range anxiety. There's little in the way of flat land round our way which complicates matters. Still, having retired from riding motorcycles, it's still good to be on 2 wheels and allegedly, it's good for us too!

I think, in my case at least, the evidence is overwhelmingly positive. It has definitely been good for me, especially through the worst months of both Covid and myasthenia gravis double-vision. I did a 50 mile morning today and returned with a solid 1 bar of power left and no sign of anything resembling the dreaded single-bar flashing warning. Worst case, it's still a bicycle and if my wife can manage to pedal 4 miles back home I bet you can too. It's slower, more work, but absolutely do-able.