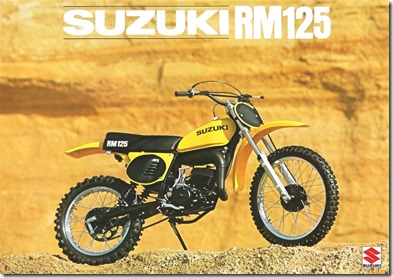 Over the last 30 years I’ve tended to forget about the small collection of RM’s I owned, raced and rode, and maintained. Mostly, it has been because my “ownership” was often dubious. On my old Geezer with A Grudge webpage, I didn’t list my association with the RM125 at all. I simply forgot about the bike in context with anything other than being a racer’s mechanic for half a decade. Contrary to what you might have expected from me there was no ill-will involved. I didn’t hate the RM125, as I did the Kawasaki KLR600 or the Suzuki TL250. I just never thought of them as “mine.” Maybe they weren’t.

I was wrenching for a kid who worked for me at our day job and who was regularly in contention for the Nebraska 125 Expert (A) Class state championship. For about 3 years, we spent almost every weekend together; him racing A class 125 and me in B or Enduro class and working on his bikes. Mostly I raced my Rickman 125 because it was my regular ride and it was mine. Mike had a deal with a local Suzuki dealership for super cheap bikes and below dealer cost parts. He went through a lot of parts, including engines, frames, suspension bits, wheels, etc. In fact, I occasionally had enough spares to build a spare bike or two. A couple of those bikes ended up under me when I was a B Class rider. I’m not sure who, officially, owned them. I know I sold at least one of them when I cashed out of my off-road bikes in 1981.

My impression of the RM, especially after the Yamaha Monocross bikes showed up at local tracks, was that the bike was light, powerful, and grossly under-suspended and the frame was way too flexible to be stable. I still remember riding behind one of Yamaha’s guys at a moto in Genoa, NE watching the YZ track through the ruts and over the busted terrain almost like the track were paved while I was being slung from one side of the course to the other by every large and small obstacle because the RM’s frame and suspension practically worked against each other and me.

Also, unlike the YZ’s, Suzuki’s philosophy with the RM motor was that the engine parts should break in quickly rather than last a long time. I knew winning racers in Nebraska who went two seasons on a motor, piston, and rings. Our Suzukis needed new rings every 3 motos, new pistons every third ring replacements, and 2-4 cylinders every season. If money, time, or energy made us decide to put off a ring change, Mike would always lose power toward the end of that 4th race and either ride desperately to hang on to his position or not even have enough engine left to be able to ride desperately.

If it weren’t for most of the cost being someone else’s money, we’d have dumped the Suzukis after about 1976. None of the RM cost came out of my pocket. For a lot of that period, I was still selling Ossas out of my garage shop/dealership and if I could have afforded to race what I sold I would have. I loved the Ossa Phantom 125 and it kicked the RM’s ass every time Mike and I practiced with either one of us on the Phantom. I never took a Phantom to the track though and most of my customers were play racers and didn’t put the bikes to much of a test. So, I don’t really consider the RMs to be something I either owned or loved.