To Lead or Not to Lead 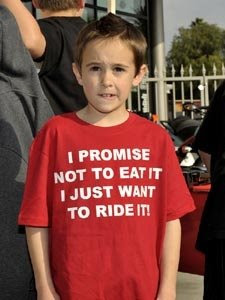 However, hardly anything is black-and-white. For instance, the much-hated CPSIA, the Consumer Product Safety Improvement Act of 2008, which banned kids' motorcycles and OHVs because of their lead content. The industry, of course, is upset because motorcycles for rich little kids is a dependable source of income and sales. In this economy, the rest of us may end up living under a bridge, pawning our motorcycles for lunch and a tarp to sleep under, but the children of the rich will aways have their expensive toys.

Unless the government bans those toys.

And the federal government did just that.
As soon as the CPSIA was announced, motorcycle dealers discovered they were committing a federal crime in selling these expensive toys; a crime that could cost them $100k per sale. Even with the over-inflated prices of toy motorcycles and ATVs, it's tough to come up with a profit margin that would include a $100k tax.
On one hand, an old biking hero, Malcolm Smith, is staging his version of the Boston Tax Protest by selling 3 of these bikes on television and gearing up to fight the following court battle. Of course, he's also asking for a contribution from "everybody" to help pay for his legal costs, "I'll have to get a loan to pay it. Hopefully everybody will send five dollar checks in or something." If he goes to jail, will he ask each of us to serve a day or two for him? I'll probably pass.
On the other hand, the US is practically the last 1st world nation to ban lead from common products. We still, as Malcolm Smith proved in his protest, sell lead weights in sporting goods stores for fishing. We still use lead in electronics manufacturing. We are saturated with lead products and lead waste and it is probably affecting the national IQ. The theory seems to be, "by the time we decide lead is a bad thing, we're all going to be too lead poison-retarded to do anything about it or care."
Finally, from the perspective of an old fashioned progressive, populist radical, I don't much care about the availability of expensive toys for the children of the rich or over-credit-extended. The three characters who bought Smith's illegally sold OHVs were Troy Lee (Troy Lee Designs), Glen Helen Raceway owner Bud Feldkamp, and Jeff Ward. All millionaires, all folks with vested interests in keeping this market alive. This isn't exactly the same kind of crowd who were present at the Boston Tea Party, regardless of what Smith would like to believe.
The "right" to contaminate the planet for recreational purposes is up for question. The "right" to put our kids on dangerous vehicles, in front of spectators, for our entertainment and personal glory is also questionable. I've said it before, so I realize I'm redundant, but I hate that "break" in AMA Stadiumcross where the little kids line up and launch themselves at pro whoops and jumps as much as I hate torture scenes in movies. I can't get up an interest in kids on motorcycles, ATVs, snowmobiles, or any other motorized vehicle. Kids should be self-powered. Add to that belief my total disinterest in the problems of the rich and idle and I am completely disconnected from any concern over this vital motorcycling issue. The plaintive cry of rich dads bawling, "think of the kids!" is less than inspiring. I just don't care about this non-issue.
Posted by T.W. Day at Wednesday, April 01, 2009

Since I've not been keeping up on non-issues such as this & I've yet to Google the topic, this smells like an April Fools joke to me. I'm really hoping that it is since I'd hate to see tax dollars wasted on this. Of course, this could be considered an economic stimulus package for the lawyer contingent. All the same, I heartily agree that little kids should pedal bikes for quite a while before they get to twist a throttle.

Sincerely,
A fan in Tucson

Back in the 1950s, when the US State Department regarded a passport as conditional on a citizen's behavior, it was rich guys who decided to make a test case of the legality of lifting citizens' passports for disapproved politics. It went to the Supreme Court, who ruled that a passport was simply certification of citizenship, and not a reward for "good behavior". Rich guys know lawyers - they went to school with them - and there is always a class of lawyers who want to take on the status quo

Likewise, until the post-WW II era of "big science", there would have been very little science indeed had it not been for wealthy types who either carried on experiments themselves or funded the activities of others. Charles Parsons was born with the proverbial gold spoon, but interested himself in engineering developments that in 15 years transformed marine transportation and electricity generation.

Rich guys also like to collect things that, in my opinion, ought to be collected. For Kermit Weeks, it's WW II-era aircraft and engines. For others, the arts, or books, glassware, furniture. Were it not for such activities, life would have much more of a "general issue" flavor than it does, and the past would be lost much more quickly.

Like I said in the column, I have mixed feelings about this. For me, the bottom line is that I don't really care about the fate of rich kids and their little league dads. They have plenty of power and a bought-and-paid-for government to protect them. I say, "let them eat whatever they eat but don't expect me to be interested." I don't care what happens to Brad and/or Big Lips, either (forgot her name).

Seems to me there was plenty of science going on during the 1950s outside of rich guy hobbies. Universities got into research pretty big about then. Of course, the military industries didn't slow down much. Here in Minnesota, most of medical device science was carried on by garage hobbyists until it became big money.

I really have mixed feelings about collections. A lot of that feels like mental illness, to me. A buddy "collected" Yamaha XS650s by the dozen, until he got married and got a life. I don't know about you, but I thought the original British version of that bike was embarrassment to mechanical engineers everywhere. The Japanese copy was barely a joke.