Book Review: Down and Out in Patagonia, Kamchatka, and Timbuktu 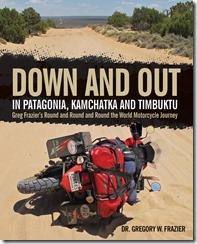 While I've met, talked to, and even sat on a discussion panel with Dr. Frazier, Down and Out introduced me to more things about him and his past and his motorcycling adventures than I knew was available to learn. For one, who knew that Dr. Frazier was a Texas hippie? Not me. If I had, we'd have had completely different post-VBR-session beer drinking events. For two, Dr. Frazier's experiences with Harleys and Indians was a complete surprise to me.

A segment of the Motobooks press release has this to say about Dr. Frazier and his motorcycle history, "The first-ever, first-hand chronicle of Dr. Gregory W. Frazier's never-ending motorcycle ride. A little over 40 years ago, a man named Gregory W. Frazier got on his motorcycle, went for a ride, and never returned. He's still out there, circumnavigating the globe: exploring the jungles of Asia in the winter, trout fishing in Alaska in the summer, and covering all points in between during the rest of the year. He's been shot at by rebels, jailed b y unfriendly authorities, bitten by snakes, run over by Pamplona bulls, and smitten by a product of Adam's rib. He's circled the globe five times and has covered well over one million miles (and counting). During those past four decades, Dr. Frazier has been chronicling and photographing his around-the-world adventures, publishing 13 books on the subject (including one previous title with Motorbooks), the majority of which have been manuals for touring specific locations or general how-to-tour-by-motorcycle books. He has also produced 9 documentary DVDs, but until now, nothing in print has encompassed the entirety of his worldwide motorcycle adventures. . ."

I don't think any readable book could hope to have "encompassed the entirety of his worldwide motorcycle adventures," but this book does a pretty good job of explaining who Dr. Frazier is and where he's been. For $35 list ($26.15 on Amazon.com and $26.25 on Motobooks.com) you can read about Dr. Frazier's early exile from his family due to his motorcycle fixation and mediocre study habits (I never did figure out where the "Dr." comes from.) all the way to his inventive methods of financing his around-the-world adventures and his trip around the world with a handicapped passenger. In between, are his adventures, his motorcycle "education," and a lot more about the man than I've gleaned from his previous books. Fraizer is a complicated combination of humble aware-of-his-Ugly-Americanism tourist and a confident, in-crowd world traveler. He's hard not to like.

In 2010, Frazier retired from round-the-world travelling, which does not mean the same thing for him as it does for mortals, "I’m not done tasting the environments, economies and cultures of the world from atop a motorcycle. There are still plans to attempt reach distance places, as well as to return to some I want to see more of, like Colombia and Brazil in South America, as well as more of Eastern Asia and Africa. I merely plan to quit this foolish squandering of travel funds to transport motorcycles over water. 75% of the earth is water and the increasing costs and bureaucratic hassles associated with transporting motorcycles to the remaining 25% have been seriously cutting into my remaining travel years and project budgets."

Down and Out provides a lot details about the cost and complication of those "projects," but it would require a whole book to fill in the blanks if you are hoping that reading this book will put you in a position to fill Fraizer's shoes. As he says, more than once, he was fortunate to have been bitten by the travel bug at a rare moment when politics, economics, accessibility, and temperament all aligned to allow him to go the places he went relatively safely and inexpensively. Many of those places are unstable and insanely violent today. Even more of those places are specially hostile to Americans (although Fraizer often identified himself as a "Canadian"). So, reading Down and Out has an aspect of a time piece and a history book. Still, brave people are riding motorcycles in remote and hostile places every day and Dr. Gregory Fraizer has been an inspiration to many world travelers. This book will be one more stone in the staircase he has built to put us all on the roads around the world.