Another Brick on the Wall

I have never been a fan of “bikers”: assholes on Harleys. Since the moment I realized motorcycles could be transportation, this bunch of idiots has made motorcycling less fun, more dangerous, and their existence reflects poorly on everyone who rides a motorcycle.

This week, they pushed the limits of my intolerance off of the Monopoly board, "Donald Trump and Bikers Share Affection at Rolling Thunder Rally." Now, in their reflection and in many eyes, all motorcyclists are racist, moronic, fascist, and (still) excessively childish and noisy. What that rally always needs is an Eric Cartman to shout “Hey assholes!” And to remind them that they and 13-year-old girls are the only people that needy for attention.

“He speaks what’s on his mind and means what he says,” said Tom Christian, one of the unwashed Thunder Blunders. “And that’s what a biker does. That’s the way we are: We say what we think. If you like it, you like it. If you don’t, go the other way.” Another description for that would be “tourette syndrome.”

Of course, to actually say what you think you have to first think. None of that going on in this rally. These wannabe-patriots pretend that being racist assholes is something noble, “Just like asking Jane Fonda to show up, it’d be a very, very bad thing,” said one of the douchebags who also wore a button that read, “Hillary for Prison 2016.” Where was this idiot when Trump denigrated John McCain’s service and sacrifice when Trump said, “I like people that weren’t captured, O.K.?”

Trump was disappointed that there weren’t more assholes out to celebrate his bullshit, “I thought this would be like Dr. Martin Luther King, where the people would be lined up from here all the way to the Washington Monument.” Trump, you’re no Dr. King or Bernie Sanders. There is a shitload of idiots out there, but most of them killed themselves riding poorly on incompetent machines without helmets or brains inside their skulls worth protecting.

You want to know why I don’t like Harleys or the gangbangers who ride them? This is it. My father wasted four years of his life fighting Hitler’s gangbangers so we could grow our own. That is a grudge I will never let go of. 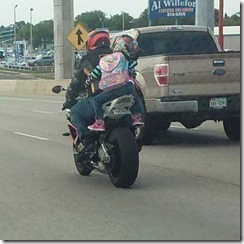 Rider’s Digest ran a little piece based on a picture and some kickback from people seeing this example of child abuse on a Texas freeway (“Precious Children Revisited”). I’ve made it pretty clear how I feel about kids on motorcycles in the past—with “I Hate Racing” and “Parental Responsibility”—and I don’t feel any different today. Obviously, some folks think their right to permanently scar their children, physically and emotionally, overrides the concerns of the “nanny state,” whatever that is.

There are more things that I don’t understand than things I do, by a really big number. Putting children at risk is one of them. I don’t get the payback. I’m not in any way arguing that kids should be kept in padded rooms, prevented from playing outdoors, experimenting with their capabilities, playing sports, or even fooling around with the opposite sex. However, this picture of a small child with her heels inches from a sticky sportbike’s tires, clinging for dear life is none of that. Your mileage may vary.

Down the Drain, the Oily Drain

Back in 2009, I put in about 3,000 miles between the Twin Cities and my North Dakota ghost town tour. Having spent a couple of days in the state on the way to Alaska in 2007 and a few more on the way back and falling in love with the place, it is really painful to see how badly the state has fared with its oil wealth. Lee Klapprodt worked hard, back in 2009, to convince me that the state would do the kind of job protecting its natural resources from oil and coal that no other state or country had ever managed. I was dubious then and am really sad to see that I was right. Nobody in the history of humanity has ever forced miners to behave ethically and now that miners are wrapped in corporate protections they are even more corrupt, ruthless, and vicious.

When my wife and I took our 2013 “goodbye to our Rialta” trip to ND, Bismarck was the western limit of our visit. I’d read horror stories about the fracking and associated pollution surrounding Teddy Roosevelt National Park and didn’t have the heart to witness that desecration. I’m not sure I’d be willing to go that far today. Anyone visiting North Dakota could see that it is a fragile place with limited water resources, a large number of subsistence rural communities, and an environment that was terribly damaged by farming and would be even more easily destroyed by Big Oil.

One of the worst things about getting old is the number of places to which I can never return. I can’t go home again. I can’t swim in Southern California’s Pacific Ocean. I can never expect to see uncorrupted plains, Badlands, and wild rivers without oil scum in North Dakota.

On the back page of this month's Cycle World I learned that Allstate and a few other insurance companies have joined forces with something called the "Rider Protection Project" to let us know that motorcycling is dangerous. Their "shock notice" is that "three riders die at intersections every day." My first reaction was a little surprise that there are that many riders on the road every day. I know, "shame on me." 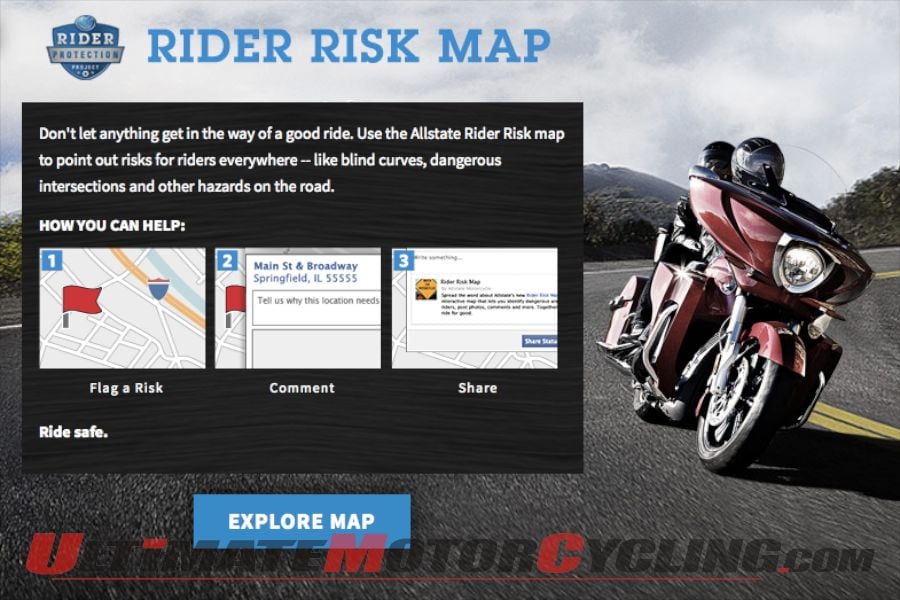 I honestly do not know what to think about this project.