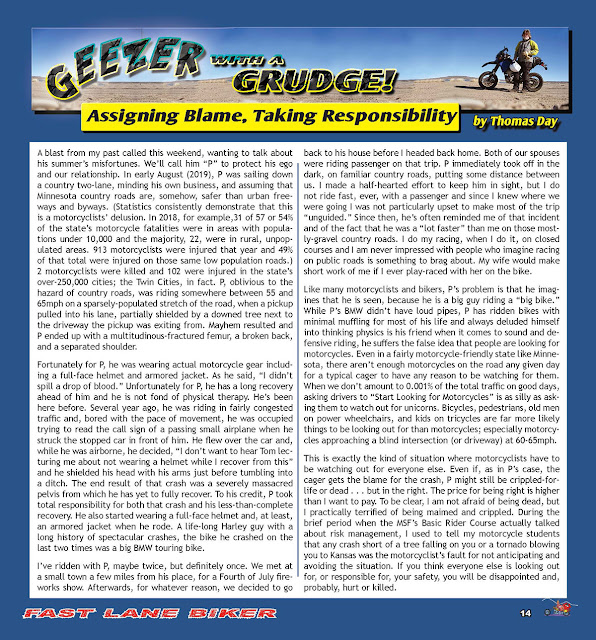 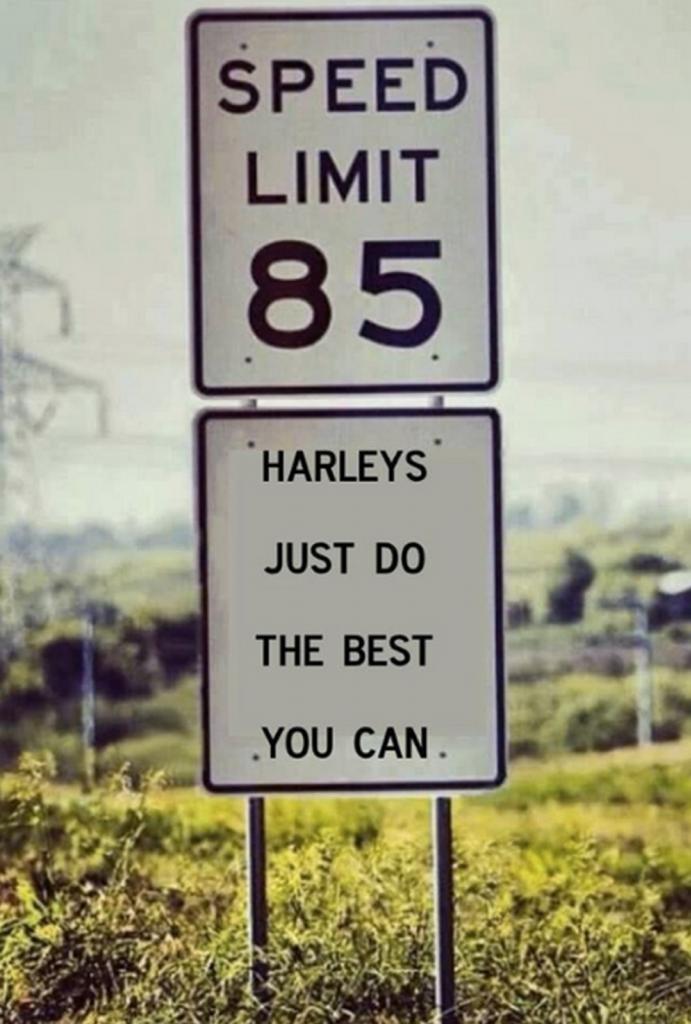 A few weeks ago, on a warm Saturday, my hometown was infested with the usual collection of bozos on bikes. Traffic on Old Main Street was jammed up and loud as a 1950’s drag strip. Driving through that section of town is usually miserable on a warm summer afternoon and if I didn’t have business there I would never venture down that street weekends. That day, I had business so I was stuck.

After I finished my Saturday transaction and tried to back out of my parking space, I discovered that another noisy pirate parade was in progress. Since the cops had conveniently found donut shops at the other end of town for their day-long break, the bikers were trawling the street making it almost impossible for anyone with a life to get on with it. After waiting for several minutes for an open space, I found one and backed into my lane. About the time I was straightened up and in forward gear, a pair of nitwits on hippobikes came wobbling down the street in the opposite direction and one of the crossed the center line about 20’ from the front of my pickup. Realizing that a solid object was in his random path of travel, the biker managed to weave back into his lane and barely missed both my left fender and the other half-wit who was no more skilled or in control of his geegaw-disabled vehicle. I caught the raised finger of the first nitwit in my rear view mirror.

Driving toward downtown on Highway 61 (Yeah, that “Highway 61.”), a large full dress ubiquitous black cruiser of some unknown brand passed me on the left. At first, I was impressed that the bike wasn’t obnoxiously loud and that the rider wasn’t dressed in pirate underwear. He was even wearing something resembling a helmet, open face, but not a total toilet bowl. However, he sped past me and the Suburban in front of me, swung into the right lane, and immediately came to a near stop in front of the Suburban before waddling into a filling station; bringing all of the right hand lane traffic to a near stop in the process. It was pure luck, on his part, that he wasn’t rear-ended by the Suburban. Of course, if he had been the SUV driver would have been blamed and more biker crash statistics would be skewed incorrectly away from faulting motorcyclists.

Yesterday, on my way back from the Cities near the UofM, I saw an AGAT biker on some sort of adventure touring bike. It was one of the many “bikes with a beak” and I can’t tell one from the other: coulda been a Triumph Tiger, a newer V-Strom 650 or 1000, a BMW F800GS, or some other wanna be I have yet to meet. The guy was wearing motorcycle gear and I was initially impressed. However, when we came to a stop light, he passed me and the two cars in front of me in the bicycle lane, and jumped the light gambling that no one in the opposite direction would be turning into his path. Again, pure luck that any number of things he couldn’t see or react to didn’t arrive in that intersection when he did.

Because I see so much cruiser/biker incompetence around my hometown, I tend to stereotype “idiot bikers” as characters on cruisers and other hippobikes, but mostly too many of the idiots riding two wheels appear to be mentally deficient with the riding skills of a kid who just came off of the training wheels or a tricycle; brand and species of motorcycle be damned..

The industry is hurting, again, these days. Dealerships are closing, dealers, importers, and manufacturers are reducing their motorcycle inventories. Rider training programs are shrinking to small fractions of their peak years, only a decade ago, and you see even fewer motorcycles on the road outside of occasional pirate parades and stacked up in front of bars. If there were a time when reducing motorcycle access to public roads would be easy, this is fast approaching that moment.

Motorcycle manufacturers, on average, aren’t doing much to slow the regression, either. The average motorcycle is less efficient, fuel-wise, than the average mid-sized car; even SUVs! Toyota’s 2019 RAV4 gets 40mpg, which is as good as all of the liter adventure touring bikes and better than all of the sportbikes over 600cc and as good as most of the 600cc sportbikes. Some cruisers get not-awful economy, but their owners “fix” that with aftermarket exhaust systems and lame attempts at performance enhancements that kill fuel economy and pointlessly multiply the exhaust emissions. Outside of that lame “image” bikers imagine they are sporting, practical reasons for riding a motorcycle are disappearing.

I “retired” from the Minnesota motorcycle safety training program last year (2019), after I reviewed the new, grossly dumbed-down MSF program. It was pretty lame before, but it really became focused on putting butts on seats in the newest iteration. No more “adult education” tactics, now we’re just supposed to be hand-holding prospective motorcyclists through the test so there is practically no way they can fail to get an endorsement. In every class, for the past 18 years, there was always at least one “student” who slipped through the cracks, passed the overly-easy “test,” and got an undeserved and unexpected license. I’d caution them that driving on a closed-course at 15mph was nothing like riding in traffic and that they really needed to keep working on their skills if they were going to survive, but I know those words went in one ear and out the other.

In demonstrations like the ones I described in the first four paragraphs of this article, I see the results of our foolishly easy motorcycle licensing and the incredibly stupid fact that once you have a motorcycle endorsement you have it till you die. All it takes is a few bucks for the endorsement renewal fee every time you reup your license. You can even transfer a Minnesota motorcycle endorsement to a California endorsement for a little money. Crazy! If you think knowing how to wobble down a Minnesota or Wisconsin country road is in any way useful experience on the 405, you are delusional. So on we go, down the path of becoming a piece of motoring history; like horses and buggies and go-carts and street legal ATVs. Yeah, those were all things; long ago. And now they aren’t.