Until You Can Ride, I Don't Care What You Think


This essay title is one of the crafty sayings on the GwAG tee-shirts. In fact, this is the phrase I picked for my personal prototype shirt, the first and possibly only GWAG shirt owned by anyone on the planet. When I debuted the shirt on my Facebook page, all sorts of folks took offense. Good. I'm not in this life to make fools feel good about themselves. In fact, the older I get the less I care what anyone thinks about anything I do, say, or think. One of my other favorite shirts says, "Hermits don't have peer pressure" (Steven Wright). I might have peers, but I don't often listen to anything they have to say and I pretty much never change my opinion or revise my lifestyle because they are uncomfortable or disapprove. 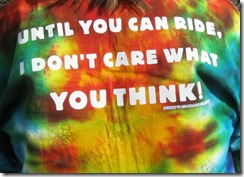 I went for a bicycle ride with my wife back in March, 2013 (while we were camping at Palo Duro Canyon, Texas). She hasn't put many miles on a bicycle for a long time and wasn't a particularly technical rider when she did ride. She "rides" a stationary bike some, but that's not real bicycling and not much of that exercise translates into bicycling competence. Shifting, for example, or balancing or watching for traffic or stopping or turning. On her stationary bike, she pedals continuously against a fixed resistance. On her mountain bike, she can not get a handle on matching her pedal speed and resistance to the road speed. She wants to randomly twist her Grip-Shifters and desperately hopes something good will come from that activity. What she does not want to do is think about how the front and back derailleur shifters work. Like the stereotypical man'splainer I am, I tried to help her figure out pedaling, shifting, and maintaining a constant load on her legs in the insane hope that she would learn to like bicycling. As you probably already guessed, what I got for my effort was a blast of feminine anger and a long, unpleasant ride with lots of stops, extended periods of silence punctuated with lots of what passes for cursing from the "gentler sex." If "helping" with shifting gets that kind of response, imagine how talking about watching for erratic drivers and road-hogging truckers and staying in her lane went.

One of the hardest things many teachers have to learn is to find a way to care about the opinions, as uninformed and foolish as they are, of their students. If you try to fake it, you'll just sound patronizing. You really need to care on some fairly honest level. Many students, of any subject, labor under the delusion that they actually know something that would be interesting or useful to their instructors. Trust me, kiddies, you do not know anything anyone ever wants to hear about. Nothing. Not one thing. When you are stumbling along, failing to maneuver the bicycle or motorcycle competently, the last thing the person who is trying to help you needs to hear is what you think may be wrong with the vehicle or the advice you are given.

A typical attempt to bypass that foolishness is when the instructor takes your vehicle to demonstrate the technique. If the student is reasonably sentient, that demonstration of vehicle competence should end the conversation. Usually, it has no effect whatsoever. If that doesn't work, what would? Oddly, disdain seems to have a powerful effect. Contrary to modern, touchy-feely "everyone is a winner" educational philosophy, I've found that a sarcastic response to stupid assertions is a pretty quick route to the unused portions of a student's brain. As politically incorrect as they may be, ridicule, silence, and pretending the noisy brat isn't there are all fairly functional tactics, when it comes to conducting a group learning environment. The problem with these tactics is that occasionally a brilliant student will correctly challenge an instructor and if those moments are wrongly interpreted, the whole classroom comes unglued. The line between being an edgy teacher and being burned out is tiny.

As I cruise on toward the big Seven-Oh, I can clearly see moments in my near future where I will begin to give up more stuff. For the past two years, I've been getting rid of all sorts of possessions that I once believed would be with me to the bitter end. Turns out the end isn't all that bitter and it came up on me a lot faster than I'd anticipated. I've sold tens of thousands of dollars worth of audio equipment and I'm still getting rid of stuff from that portion of my life's history. My wife and I have purged furniture, pictures, kitchen appliances and utensils, books, records and CDs, artwork, and about 2/3rds of a household worth of stuff and we still seem to have a house full of stuff. By the end of that discard-period, I expected us to be down to a pretty small possession pile and ready to move or hit the road, whichever came first. And we were. With mobility comes flexibility. With flexibility comes less dependence on external income and tolerating the bullshit that working for a living usually requires. I am beginning to suspect that the "cranky old people" reputation is mostly generated by this cycle. Now that I have no aspirations to get richer, own more stuff, or live larger, I also have less tolerance for stupidity.

Since the two most common elements in the universe are hydrogen and human stupidity, I'm developing an appreciation for hydrogen. People, not so much.

That growing intolerance clearly signals the end of my teaching career, unless you can suggest a less stubbornly stupid species in need of motorcycle, music, electronics, or English instruction? Oddly, being a teacher was once at the dead-bottom of my list of career aspirations; since my father was a high school math and business teacher and my step-mother taught piano and neither of their careers looked like any fun at all. In the past few years, my original perspective on teaching as a career choice has been making a comeback. After a 30+ year career that included industrial training of everyone from electronic assembly workers to cardiologists and a 13 year career as a college instructor in a music school, I decided to quit while I was ahead. After almost 20 years of putting butts on seats and pointing out the brakes, clutch, and handlebars to newbies on dirt and street bikes, I find myself completely uninterested in the judgment of rookies who have strong opinions about subjects they will never master. Regardless of what happens to my motorcycle instruction career, until you can ride, I don't care what you think about motorcycle brands, styles, or politics.