On the way to the next Missouri park, we stopped in Stockton for groceries, fuel, and more dog food. The town of Stockton is kind of cool, honestly. Quaint, live, clean, and more diverse than expected would all be accurate descriptions. Robbye, for once, did the shopping at Woods Supermarket while I wrestled with some RV maintenance crap. It is a nice store with a decent local and organic foods selection and a generally pleasant business.

The freakiest moment of our whole trip occurred at Woods, though. So freaky I’ve got to figure out how to include these characters in a book. I was on my way into the store to find Robbye when a tall, bearded, stoop-shouldered fairly young guy, probably in his 30’s, and a 4’ tall 3.5’ wide dwarf (in all of the classic senses of the word) blew out of the store. He was hunkered down, trying to become invisible while his semi-female “companion” shouted expletives and 1950’s quality racial slurs back at the store. Someone in the store had, apparently, said something nice about our President and she took hillbilly offense. The funniest part of her performance was that, while she was bellowing like a Georgia cracker she was strutting and punctuating her racist bullshit like a hip hop street bozo. She even had her pants down low on her butt cheeks with flowery guy’s underwear displayed in the traditional street hip manner. She kept up the stream of KKK dialog all the way to their pickup and was audible until the truck joined the traffic in front of the store.

When Robbye came out, she said, “Did you see that?” I described what I saw and she told me that the dwarf-freak had started in on one of the store’s customers and when two of the Woods employees asked her to leave, “We can’t have that kind of language in our store,” she blew up, way over the top, and put on the beginning of the performance I witnessed through the whole store before they finally herded her out the door. We pretty much relived that experience, laughing to the point of crying, all the way out of town. 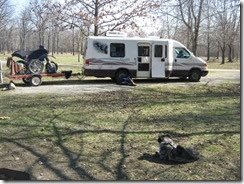 Our last Missouri destination was a surprise. Like a few of the places I’ve found on the map and had no way to check out in advance, this park looked like a loser about 5 miles off of the main highway. Crowder State Park might be the worst advertised park in the Missouri system. From the state’s website, it looks like nothing. Because of that, there was nobody else at the campsite on a Friday that promised to lead into a perfect weekend. Granted, there isn’t a lot of traditional recreational stuff to see at Crowder. The “lake” is pretty much dried up. The park is too far from the Missouri to make it a fishing campground. The surrounding terrain is mildly hilly, marshy, and farm land. However, this place is a pre-historical paradise if you’re even a little into Native American history. 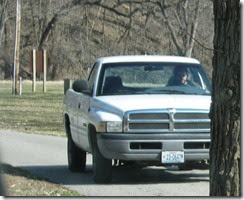 The trails out of Crowder take you to an “Indian fort,” which is a huge ditch dug around the top of a hillside. When the native people lived there, they kept the forest down by burning it occasionally so they had a long line of sight for enemies and . . . more enemies, I suppose. Nobody really knows the purpose of the ditch, but it was sure a hell of a lot of work. There is a cool ‘metal “boardwalk” that takes you out into the marsh where some of the tallest grasses I’ve ever seen live. Some were bamboo height and girth, easily 15’ tall. The information center is actually a wonderful native American history site, with some of the coolest spear and arrowheads I’ve ever seen. Eric, the only Missouri park ranger I spoke with in a total of two weeks staying in Missouri state parks (coming and going) was incredibly generous with his time and even opened the visitor center way early so we could look at it (and Robbye could buy a patch for her travel jacket) before we hit the road Saturday. We left that park with a whole new appreciation for Missouri state park rangers.

The weather report was looking shaky for northern Missouri for the next couple of days, our food supply was short (the Rialta has one seriously dinky refrigerator), and we were beginning to get anxious about going home. I had one more, for sure, campground picked out for Saturday night and Sunday, in Iowa, then we would decide on stopping a couple more times in northern Iowa or going home from just south of Des Moines.