On the Way Home (Missouri)

After leaving Oklahoma, I really wanted to slow the pace down. Our house-sitter was still in our Minnesota home, supposedly finishing up the projects he’d promised to complete and cleaning up the place. Robbye and he are not particularly compatible, so I had no interest in being the middle man in that situation. Plus, we’d blown through Oklahoma exactly three times as fast as I’d hoped. So, I was looking for a place to camp early. 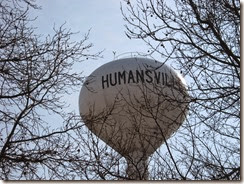 There were a couple of possibilities at Neosho, but they were losers. The next possibility was Stockton Lake State Park. On the way to Stockton, we passed a place called “Humansville” and I forced Robbye to exit the freeway for a picture. Come on, could you resist visiting the birthplace of all of humanity? I couldn’t. She, on the other hand, was less impressed. 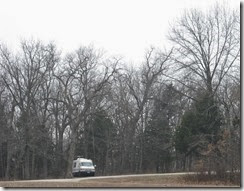 Anyway, back on the road we made good time to Stockton, grabbing some groceries and dog food on the way. Like the way into Missouri, we owned the parks on way out. I have no idea how many campers this park can accommodate, but we were the only people in the park that night. Of course, the WiFi was shut down, the showers were locked, and the only services were electricity and an outhouse. We didn’t see a soul while were were at Stockton; not a ranger, not a visitor, not anyone. I did manage to scrounge up a couple of local television stations, so we had a weather report and Robbye could watch Family Guy reruns that night. 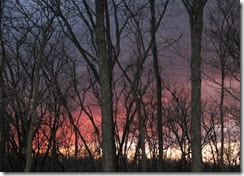 There were tornado and “severe thunderstorm” warnings on the tube. Since no one else was in the campground, we left the windows uncovered all night. The wind howled and we were entertained by a spectacular lightning show all night, a rare pleasure since RV’ing can be a fairly non-private experience under more normal circumstances.

If our shower drain worked, I would have been tempted to stay at Stockton for a few days. It’s a beautiful park. Robbye accidentally tripped the shower pump switch early in the trip and it was on for a long day of driving before I noticed the noise that evening and turned it off. It hadn’t worked since and that meant our shower was unusable. So, in hopes of more services somewhere, we headed out the next morning.