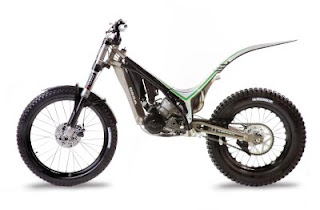 A blast from the 1970's past is back, Ossa is making trials bikes again. Everything on the site is in Spanish, so with the assistance of Babblefish, here's the word:

Certainly, project OSSA is very ambitious. That at time of crisis it leaves a new motorcycle with some concepts totally opposed to the habitual thing is a as dangerous adventure as brave. Those of Ossa have secured their intention with a revolutionary motorcycle.

The new TR280i has appeared today in the Hall Milán.El new equipment of OSSA Factory has chosen the Hall the Motorcycle of Milan (EICMA) to present/display its new and revolutionary TR 280i. It already was in this Hall, in 1965, where OSSA internationally presented/displayed the prototype on which first motorcycle of trial based his: a multipurpose denominated model Scrambler. Today, OSSA Factory returns to choose Milan to present/display the prototype of a motorcycle that it tries to contribute a blowing of fresh air to the sector. The new TR 280i raises an innovating and exclusive concept, a trial motorcycle that the spirit has inherited who characterized the past in the mark of the clover. After near two years of work, the TR 280i is a motorcycle technologically very outpost. With a motor of 2T with electronic injection, it breaks the established schemes and one appears like a quality alternative that, without a doubt, will conquer the fans.

This one is the first passage towards a future in which other projects and other modalities will conform the presence of OSSA Factory in the panorama of the industry international motorcyclist. The Renaissance of OSSA has been possible thanks to the effort of an equipment led by Jordi Cuxart, President of OSSA Factory, patron and defender of the project; Joan Gurt, Chief of a main directorate and impelling of the same; Alexander Laplaza, Financial Director and also patron, and by Joan Rome, Director of the Division of Motor and the person who has been able to reunite them thanks to an extraordinary vision of future. Josep Serra “Xiu” is the engineer and the soul of the new TR 280i, Director of the project and designer of the prototype. In his curriculum he emphasizes his Gas work Gas like person in charge of the development of an innovator and light motor of trial and its collaborations, through Xiu Research and Development SL. in different projects with Rieju, Dunax, Scorpa or in the Tramontana, an exclusive sport automobile of high benefits.

Marc Colomer, Champion of the World of trial in 1996 and five times Champion of Spain, is the one in charge to develop to the new TR 280i. “Very I am deluded with this project because I create firmly in its possibilities. We know that we have left work much ahead but I trust the equipment of OSSA Factory totally. We have already begun to work in some sections of the new TR 280i and the results are hopeful” has declared Colomer. Marc Colomer perfectly knows the capacity Josep Serra “Xiu” then both worked together in Gas Gas.

THE MOTORCYCLE OSSA has developed a motorcycle of trial with a new very innovating concept. Basically one has worked in the redistribution of the different elements of the motorcycle of logical form concerning the distribution of weights and other conditioners like the temperature of work of some from his components. Among others aspects the filter house in a very high position has been placed and readily accessible. Elements like the fuel tank, the box of the filter of the air or the radiator have been positioned thinking about the needs of a trial motorcycle. And one has become of rational form, with common sense and a clear objective: that new OSSA TR 280i is a reference within this specialty as were it at the time, the first SEA - Mike Andrews Replica of year 1972.

“The filter of the air in the low part of a motorcycle of trial and a high or located fuel tank next to the escape is concepts that from our point of view do not have logic” indicates Xiu responsible for the project. For this reason, the OSSA engineers considered new OSSA TR 280i placing the different elements from a motorcycle of trial on the table and with a folio in target they designed, them and they redistributed based on its needs.

THE MOTOR The fact that the new TR 280i incorporates a system of electronic injection it has allowed his engineers to redistribute different elements without being in favor conditional of the position of the classic carburetor. “Sometimes the injection system has been placed in the same space in which it was the carburetor, with the fuel tank in the high part of the motorcycle, without considering the option to look for a new positioning. OSSA Factory has let start off to me of zero and this one has been a determining aspect at the time of initiating this project” points Xiu. The situation and ideal configuration of different elements have given like result a very small motor with the inclined cylinder backwards, the intention to be able to locate in the high part of the TR 280i the system of injection and the filter house. The same logic that other manufacturers apply in specialties like cross or enduro, in OSSA considers that it is perfectly valid for a specialty like the trial. The new motor, of 2T, is very compact, with the case of a single piece. The change is extracted straight from lateral and the crank by the opposite side. Considering that the case for of chassis, for the being has been leaving resistant from the set, has been able to make a block compact. Of this form the possibility is simplified of acceding to the change relations. Another important aspect is that the maintenance is economic since to manipulate the propellent is extremely simple. A conventional motor as far as geometries can be considered or thermodynamics but has obtained an extremely compact set like concept. It is of the smallest motors of the moment.

The fuel tank of three liters of capacity has been placed in the place where conventionally the trial motorcycles mount the radiator to improve the distribution of weights. The equipment of OSSA Factory considers that the more light it is a trial motorcycle, the more necessary turns out to have the advanced center of gravity.

When placing the radiator behind the deposit and the filter house, is avoided something so habitual in the specialty of trial because the radiator is covered with mud, with the consequent problems that entail the fact that the motor cannot work to the appropriate temperature. A motorcycle without movement (stopped) has to have the capacity to dissipate the heat of the motor and to mount a electroventilador like in the TR 280i. Therefore, although in a motorcycle of another specialty it would be necessary to apply fresh air canalizations, in a motorcycle of trial no. Since the own fuel tank protects the radiator, the new TR 280i can work to a constant temperature, without being conditional to the possible dirt of the radiator.

On the other hand, to invest the cylinder has allowed to practically mount the admission in vertical after the fuel tank, and so the air intake through filter is located more in one of the elevated points of the motorcycle. Therefore, the watertightness of the filter will be superior and the access to the own filter, very simple through a cover. In the interior, under this same cover, some elements of the injection system will be placed. In this location the components will be affected neither by the temperature of the own motor, nor by the humidity. In the distribution of the elements of the motorcycle one has considered very the temperature to which will work each of them. When having the inclined cylinder and mounting the escape backwards, from the back monoshock absorber can be defined the escape, whose volume is superior to the one of a conventional motorcycle.

CHASSIS Made in aluminum and steel to chromium conditional molybdenum and to the design of the motor, the fuel tank has gotten up in the front part of the motorcycle having formed resistant part of the set. In the zones where habitually in the chromium chassis molybdenum there is many welds and therefore weight, forged aluminum pieces have mounted. The pipe of direction, the treated aluminum deposit, the estriberas and the support of the rods are also in forged aluminum. The rest is of steel to chromium molybdenum, with a very simple and welded structure in TIG.

The suspensions have been developed jointly with Öhlins (back) and Marzocchi (front). The back suspension mounts an innovating system of rods that is prote'ge' very and integrated and it is united directly to the forged piece of the chassis. System TTX of Öhlins to the specialty of the trial has been adopted, a system by which the hydraulic valves of the piston and settings have been placed in the outside. This technology already has been used in motocross contributing to many advantages concerning settings as far as simplicity and accessibility. The front suspension is an inverted bracket Marzocchi, a type of suspension that for many years that it was not applied in the specialty of the trial. But unlike other experiences in which a suspension of cross or enduro has adapted, in the TR 280i and close collaboration with Marzocchi, has designed exclusive an inverted bracket for the specialty with aluminum bars.

OSSA Factory enters with own technology the specialty of the Trial and it does with a human equipment with experience and the competitive spirit who made prevail to the mark of the clover. The components of the new motor will be finished in the month of December and the completed motorcycle will begin to try in January. Its production is predicted for the month of 2010 July.
Posted by T.W. Day at Saturday, November 28, 2009