A few years back, Sev Pearman and I took a trip toward Duluth for a day of off-road riding at Nemadji State Forest trails. I was pretty off-road rusty, from years of living in the Twin Cities and daily commuting and I was about six months away from having my left hip replaced. So, I wasn’t on my game and my left leg didn’t do me much good when I stuck it out in a corner. The day was close to perfect and the trails were wet and a little slick from recent rains and a fairly wet early summer. We spent a lot of the day sideways. I spent a moment lying in a puddle of mud with my WR spinning way a few feet, while I laughed at the miscalculation that had put me in the mud. Sev was concerned that the old fart had hurt himself and was impressively concerned for my health. Or he thought I’d had a heart attack and died. Either way, Sev proved himself to be a good friend and a solid person to ride with. 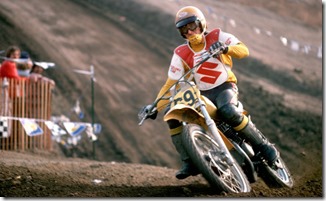 While I was righting myself and the bike, Sev commented on how much time I spent sideways and how rarely I bothered to stand on the bike. Today, I was listening to Adventure Rider Radio and a conversation/commercial for some brand of footpegs and the jock made a big deal out of how off-road riding means “never using the seat.” I’m too old for that silly shit. The fastest rider of my generation, Roger DeCoster spent at least as much time in the seat as he did on the pegs and 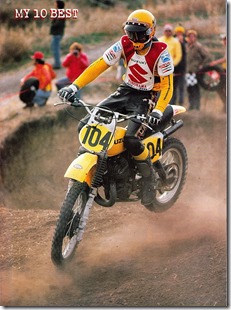 Roger won five world championships and competed at the highest level from 1966 to 1980. I first saw DeCoster ride at the Herman, Nebraska TransAM in the 1970’s. The track at Herman was seriously rough and most of the US riders were on the pegs everywhere but in the sharpest corners. DeCoster looked like he was out for a Sunday ride around the neighborhood. There were a couple of monster hillclimbs terminating in even bigger jumps and Roger was on the pegs when he landed from those jumps. Otherwise, he was seated and on the gas hard enough that he lapped 3/4 of the pack by the end of the motos. 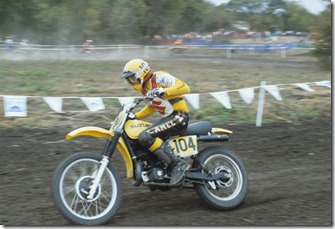 I’m not any fraction of the rider Roger DeCoster was or is, but I learned a lot from watching him ride. It wouldn’t be the first or the last time watching a worldclass athlete changed my tactics, style, or attitude. DeCoster absolutely changed how I thought about a 20 minute moto, though (although his races were 40 minutes +1 lap). I worked a lot harder at going a lot slower before I saw Roger DeCoster in person. Afterwards, I worked harder at being smoother and using less energy and, as a result, I was a good bit faster. One of the things I learned was that standing isn’t always the best riding position, even on rough terrain (even with a 1970’s suspension).

After I gave up trying to be fast, I bought a trials bike and spent a few years plonking around rocks, creek beds, and logs. Standing is the status quo in trials and the seats on that style of motorcycle aren’t worth squat. Obviously, there aren’t a lot of places where sitting on a trials section makes sense and I spent a lot of hours on the pegs. It’s not like I don’t know how to ride standing up, I’m still considerably better at low speed maneuvers on the pegs than on the seat. I'm still inclined to think Mr. DeCoster’s off-road racing style makes more sense than the “always be on the pegs” philosophy.