In his HBO special ("Fully Functional") one of my favorite comedians, Australian Jim Jefferies, asked his audience to raise their hands if their kids were "stoopid." Obviously no one raised their hands and admitted to having spawned one of the many half-pint-half-wits who are overrepresented in our school systems . So, Jefferies reminded them that, statistically-speaking, it was impossible for a crowd as big as the one he was performing for not to have at least one stupid offspring. He went on to rant about Americans being a nation intent on breeding "stupid confident people . . . the worst employees in the fucking world." When I hear motorcyclist revolt against the obvious truth that there are two kinds of motorcyclists--those who have crashed and those who haven't yet crashed--I can't help but think motorcyclists might be among the stupidest human categories on the planet. It's even worse when the revolutionist admits he's already crashed a number of times and still believes motorcycles "can be safe."

Assuming the "average" rider's skills are average, the usual bell curve indicates that about 70% of riders are on either side of "average" and about 95% fall into the 2-sigma area.

In his New Yorker Magazine essay, "The Bell Curve: What happens when patients find out how good their doctors really are?" Dr. Atul Gawande reminds us that doctors are no different than any other category of human activity, "What you tend to find is a bell curve: a handful of teams with disturbingly poor outcomes for their patients, a handful with remarkably good results, and a great undistinguished middle." If that is true for doctors, a profession that prides itself in its selectivity, high performance standards, and rigorous education and training regime, why wouldn't it be true for the rest of us who just become who and what we are out of attrition, general indifference to how we do our jobs, poor management, and luck? Studies have found that And if career statistics are this dismal, how could it be possible that driving, an activity that has such low standards of performance as driving could be lucky enough to have half-decent expectations? Motorcycle licensing is no different, with a variety of routes available to obtaining a license with minimal skill, no serious safety equipment requirements, and lifetime licensing that allows riders who have merely maintained the "M" on their license for decades to swing a leg over a motorcycle without the merest hint of riding abilities.

Due to the constant downsizing of the motorcycling public over the last 30 years (peaking in 1980 and in decline since) and, especially in the last decade, the Motorcycle Industry Council (through its "training" lobby, the Motorcycle Safety Foundation, MSF) has campaigned to keep licensing as simple and accessible as possible. Fighting progressive ideas such as graduated (or "stepped) licensing--an idea that has had substantial success in Japan, parts of Canada, England, and  some parts of the EU (likely soon to be all of the EU)--is a double-edged sword. On on hand, the MIC is ensuring itself the maximum number of customers by putting a motorcycle in every possible rider's hands. Likewise, the MIC has been barely on the fence about helmet laws with wishy-washy "freedom" arguments that hold exactly no water with the strapped-down-by-law cager public. There is some validity to the claim that if helmets are universally required, fewer people will ride motorcycles. On the other, our incredibly dismal mortality statistics are edging regulators closer to removing motorcycles from public roads, which will close the door on motorcycle sales forever. Damned if you do, double-damned if you don't. Something has to change soon, or something will change. 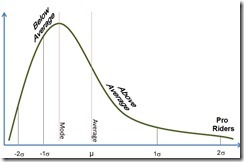 Using something more like a minimum acceptable "average" rider skill as the centerpoint, a left-skewed distribution curve would result with dramatically more riders in the "below average" category and a wide range of abilities in the "above average" group.

In pure population terms, it's pretty obvious that the "average" point in motorcycle skills is skewed data. If you plant yourself on any popular corner in most cities, you will observe cornering techniques that range from out-of-control to "not too bad," with a tiny portion of riders executing turns with decent technique and control. If we were to score lifesaving skills such as stopping quickly, swerving to avoid a hazard, turning precisely at a variety of street-legal speeds, quick combination maneuvers requiring these skills, and one or two low speed control skills on a scale of 1-to10, I think it would be safe to say that more than 70% of us would be substandard riders. That's probably being optimistic. In terms of your own survival, you need to be able to identify where you fall on this curve and, if you aren't where you want to be, find a way to upgrade your skills or admit that riding a motorcycle is either not for you or a high-priced suicide attempt.

I know that it's hard to be realistic about this. Studies have found that 80% of drivers think they are above average. More statistically impossible crap. It's one thing to be protected by crumple-zones, air bags, seat harnesses, and auto-piloting cars. It's another to be sitting on 200hp of two-wheeled instability in your wife-beater, flip flops, and pirate bandana. If you are one of the 70-90% of motorcyclists who suck, you should trade in your bike for a fancy lawn tractor and take the muffler off of that vehicle: just in case the lack of a loud pipe might cause one of your neighbors to run over you with his even fancier and larger lawn tractor.

On the other hand, if you suck and know it but have the patience, interest, capacity, and time to get better, work on it. Get some training. Spend a few days on a race track (on track days, not racing unless you really are one of the cool kids and decide to be a racer). Buy or borrow a few books on riding. Practice your riding skills at every stop light or sign, on every curve, and any other opportunity you may have where the results are not critical. And practice where you screw up you can just go back to the start point and do it again until you get it right. Do not be afraid to suck, but you should be damned nervous about being proud of sucking.