Over a ten year period, I owned four different motorcycles while I lived in southern California: a 1979 Honda CX500, a 1982 Yamaha XTZ550 Vision, a 1986 Kawasaki KLR600, and a 1986 Yamaha XT350. Of the four bikes, the hands-down best daily California commuter was unquestionably the XT350. For four years, I rode my 350 to work from Huntington Beach to Costa Mesa every morning, three to four days a week, to school in Long Beach after every work day, and for 90% of my non-family-related transportation for a total of 68,000 miles. During my last years in California, if I wasn't on the XT, I was on a bicycle (I biked to work almost every day I didn't have college classes). My twenty mile work-to-school commute was via the Pacific Coast Highway, which was dramatically quicker than the 405, thanks to lane-splitting and filtering and no-thanks to the 405's 5mph average rush hour speed. The XT's narrow profile made efficient commuting even more practical as SUVs and other oversized single-passenger vehicles became more popular in the late 80's and the spaces between vehicles shrank considerably.

Since the 80's, so-called "dual purpose" motorcycles have grown (in size and expense) along with the SUV market. It's hard to imagine calling a Super Ten or a BMW 1200GS a "dual purpose" bike, but if you can manage that sort of off-road ride, you probably agree with Emilio Scotto who rode a his "Black Princess," a 1980 Honda GL1100, 457,000 miles through practically every country in the world and claims the Goldwing is the perfect adventure touring bike. Personally, a 900 pound Goldwing would not be my off-road choice and it wouldn't be the bike I'd pick to commute on, either. In a pretty-good world, lane-splitting and filtering would be a common part of urban traffic management and we'd all be saving time, money, energy, and highway maintenance taxes. That's the world in which a real dual purpose bike excels at commuting. With our tall seat height, we can see over and around most other vehicles. The long-travel suspension and spoked wheels allow for almost unlimited escape routes during times of stress. Light weight and nimble handling, a real DP bike can go where panicked cagers fear to roll.

For example, by the early 90's, analog cell phones (as compact as a bunch of bananas) appeared and California drivers became even more distracted. The ability to slide between cars and jump curbs to escape multiple car pile-ups became lifesaving. I'd have been the gooey center in a car sandwich multiple times if I had been on a less nimble motorcycle. Regardless of Minnesota's primitive motorcycle laws, I still split lanes on the freeway when forced to come to an unexpected stop in heavy traffic. I don't even wait for the tire screeching warning that some dimbulb has discovered, too late, that his cell phone was not the most important task of the morning. I just put iron between me and the idiots behind me and merge back into the flow of traffic when it crawls back to life. If a cop wants to give me a ticket for a preventative lifesaving move, I'll spend the time in court defending my right to stay alive. Jumping a curb and hiding in a convenient flower bed is a whole different kind of maneuver, though. That move isn't even an option for sport bikes or cruisers because they don't have the wheels, suspension, or ground clearance. It's not a practical move for a 600 pound "dual purpose" bike, either. 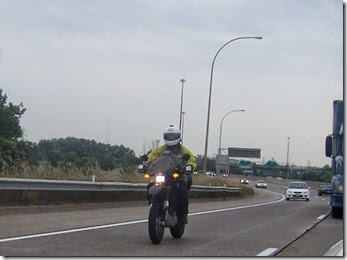 I abandoned real DP motorcycles when I moved to Colorado (No, that doesn't make a lick of sense.), but after a few years without a serious dual purpose motorcycle, I bought a 2000 Kawasaki Super Sherpa KL250 with the intention of commuting and touring on the bike. The touring part never happened, but I regularly commuted on the little bike, putting 8,000 miles on the bike in two seasons. It replaced my V-Strom as my regular ride; solely because of the fun factor and 70+mpg in-town efficiency. A couple of years ago, I replaced the Sherpa with my current favorite motorcycle, a Yamaha WR250X. It gets slightly worse mileage (about 60mpg), but it starts easily year-around; thanks to fuel injection. I have a little more than 10,000 miles on the WR and it has done double-duty as a regular commuter and an mid-range adventure touring bike. My old V-Strom is even more lonely than before. In fact, I have ridden it once this year, as of mid-August.

A survey I have been running over the last year found that the average motorcyclist (loosely defined) rides well under 2,000 miles a year. There is no positive correlation between engine size and miles-ridden, either. With that in mind, it's obvious that most of us need nothing more than a 250-500cc motorcycle and the most practical motorcycles every made are dual purpose. For all-around daily use, a motorcycle that can go anywhere, does it efficiently and reliably, and has a decent resale value is hard to beat. Aerostich's Andy Goldfine has a "small and simple equals fun" basic motorcycle rule. Add a versatile suspension, great handling, narrow profile, fuel economy, dependable resale, and a design intended to be treated roughly and you have the perfect commuting motorcycle. Maybe, the perfect universal motorcycle.

His version was "L + S = MF" which stood for 'Light + Simple = More Fun'.  He deserves full origination credit for this idea as it relates to motorcycling.

I hope we will be able to get together in person some time this summer.