So Many Things Explained 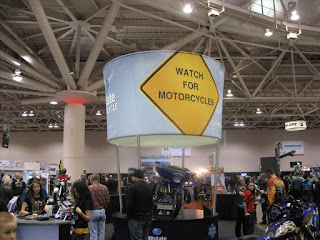 Being the media moron I am, I drove to downtown Minneapolis this morning for the Progressive Motorcycle Show. It's easier to say I did it than to explain why. A lot about the motorcycle business depresses me rather than providing a winter perk-up. The average age of the PMS spectators must be close to 100. The average weight is a little scary, too. (I mean of the motorcycles, of course.)

I've been going to the annual motorcycle show for almost 25 years. My first then-Cycle World Motorcycle shows were in LA, followed by 5 years of Denver shows before I moved to Minnesota in 1996. Back in the 80's, there was a fair amount of excitement before the shows because the manufacturers didn't pre-promote their new bikes in the media for a year before we actually got to see them. Also, there were a fair number of actual new models every year from all of the manufacturers. Since the turn of the century, the show is mostly about the new colors on the old bikes. Every couple of years, one or two new models might appear but, mostly, the bike show is about paint jobs and chrome and a half-dozen companies selling eye glasses cleaner.

This year's trip downtown was the most "interesting" part of my day at the bike show. For starters, I hate driving in Minneapolis. The city was designed by a band of illiterate professional wrestlers who took advantage of a sale on one-way street signs and randomly decorated the city with their bargain signage. Between the city's planned disorder and a variety of closed-for-repair streets and the usual Minnesota inability to move more than 3 cars through a 2 minute stop light, it took me almost 50 minutes to drive 15 miles to the convention center, which put me in the parking lot about 10 minutes before a meeting at the center was supposed to begin. Like most badly managed cities in the country, Minneapolis has farmed out parking meters to a private company (in exchange for a little up-front cash to pretend-balance a previous year's budget). The new meter system consists of numbered posts with central parking ATM where you can use a credit card or cash to buy time. The software in this system is typically user-hostile and about as cleverly designed as most of the state's websites. 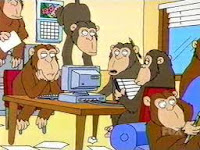 With ten minutes to spare, I lucked out and found a space right next to the meter-ATM. However, there were four geezers in pirate outfits surrounding the meter and by the time I got out of the car, they were joined by three other geezers (all wearing Hardly gear). The scene resembled a pack of chimps surrounding a computer that smelled like bananas. Twenty minutes later, I'm freezing and not one of the Harley chimps has figured out how to pay for their parking. Two have given up and gone back to their cars for heat. I'm joined by a young guy dressed in shorts and a tee-shirt. He seems to think that his lack of planning should put him in front of me in the line of deranged monkeys, but he's disappointed. Twenty minutes later, the last of the Harley chimps either figures out how to pay for parking or leaves willing to accept a ticket, I don't care which.

I pay for my space and run to the convention center, arriving at the Victory booth 15 minutes late. No one is there and I didn't see anyone from the magazine in the 3 hours I spent prowling the displays and taking pictures. I did see more Harley chimps than I usually have to tolerate in a decade and relearned that those characters can't walk any better than they ride, drive, or decipher parking meters.
Posted by T.W. Day at Saturday, January 12, 2013