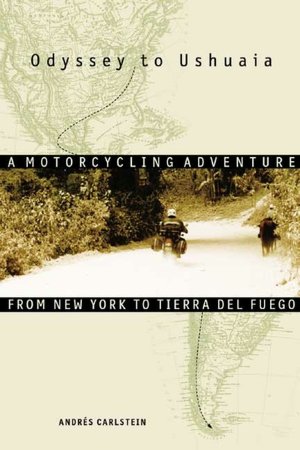 Odyssey to Ushuaia
by Andrés Carlstein, 2002

This is a tour story of a ride from New York City to Tierra Del Fuego, but it's an odd version of the usual saga of multi-national hardship and extreme sports because the main character, the author, is something of a flake. At the time of the trip (1999), Carlstein was 25 years old and mostly a rookie motorcyclist. He was fortunate enough to have stumbled (through Internet research) upon a KLR650 as his vehicle of choice, but every other thing he learned he had to learn the hard way.

Intentionally or otherwise, Carlstein portrays himself as an anti-hero. He is often childish, regularly selfish and callous toward the women he meets and the people who cross his path, and often arrogant. Honestly, I kept at the book to the end because I wanted to find something about this guy that I would like. To that end, I came away disappointed. I can't say I dislike Carlstein, as he portrays himself in his own book, but I wouldn't cross the street to meet him either.

To give you an idea of what it took to hammer my way to the conclusion, a few pages from the end Carlstein meets a pair of motorcyclists and gets into a discussion about Greg Frasier's South America tour book. Carlstein says Fraiser's book was "not bad." And explained that comment by noting, "I was trying to be nice. The book wasn't bad--when compared to a book that is terrible." Carlstein does that throughout the book. When you are almost starting to like him, he will find a way to make you feel that his many crashes, catastrophes, and personal problems are a just desert. As an author, he isn't a modern Shakesphere or even one who would challenge the skills of most newspaper writers. He is confident and you have to give him that.

Carlstein begins his trip on the right foot. Somehow, he manages to connect with two experienced long-range motorcyclists (Robert and Peter) and they meet in Texas just before the first international boarder crossing into Mexico. These two guys have the patience of near-saints while over the next several thousand miles they put up with a variety of screw-ups, mechanical problems due to Carlstein's general lack of motorcycle skills, and fairly regular temper tantrums. I liked both of those guys and half-wished one of them had written the book.

All three of these guys have South American connections and possess a variety of language skills, which serves them well through the disaster zones Central and South America call "boarder crossings." The best parts of Odyssey are when Carlstein is describing the places and people he meets on the road. The worst parts are the regular sections when he is feeling sorry for himself.

In the end, I found myself neutral on Odyssey to Ushuaia. It was a distraction during one of the longest winters of my life, but I can't say I'd ever read it again or recommend it to someone who wasn't equally desperate for a motorcycle book. If you don't have an unnatural desire to know as much as you can about South and Central American travel by motorcycle, I suspect you won't find much to like in Odyssey to Ushuaia. If you are considering this trip and want to hear what crossing those boarders is like, there might be some value in the book.
Posted by T.W. Day at Saturday, December 10, 2011