At 69, I’m at the point where lots of the things I’ve done all of my life are at the end of their track. My plan for a ride I took early last summer was that the day I left I’d be up at 5AM and out the door by 6AM on my way to Colorado. I’ve been “planning” that trip for about a month and, apparently, I’d put off anything resembling real planning for exactly that long. 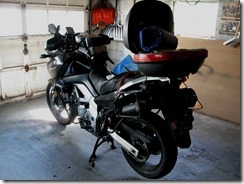 So, a couple of days ago I went over the V-Strom with about as much enthusiasm as I might apply to prepping the lawnmower for winter storage. I have the routine down, after all these years, but I didn’t put a lot of thought or heart into it. I’m just going through the numbers by rote, which probably means I forgot a number or two.

If you’ve read much of my stuff, you know I don’t “love” my motorcycles. I really like my Yamaha WR250X and I’ve taken more adventures on the 650 V-Strom than any other motorcycle I’ve owned since my Honda CX500, but affection is probably the strongest feeling might be able to aim toward either bike. I don’t name my motorcycles and I think people who do such things are demented. I don’t have a huge investment, financially or emotionally, in my motorcycles; having bought both of them cheap, used, and out-of-season eight and eleven years ago. I don’t see myself replacing them when they or I are worn out, either.

At this point, several years post-hip replacement and post-first-heart attack, my best days on two wheels are behind me. I’m through racing, “Adventure touring” from here out probably means trips like the one I took to Colorado and New Mexico. The “adventure” will be hanging out with an old friend while we wallow in hot springs to see if I can regain some of the use of my arthritic hands. Gone are the “safe and reasonable” days of blasting across Wyoming, Montana, and assorted back roads with the throttle pinned and a short schedule to keep before I have to be back home and at work. I have a pickup and a small RV trailer and my wife wants to travel with me at least half of the places I go from here out. At best, 60mph will be our top speed while cruising in that rig. I didn't plan on doing big off-pavement miles on that trip. It was likely that US Route 20 across the top of Nebraska would be as rough as that trip would get. If I needed a tire along the way (and I did), I'd be going through at least a dozen decent sized towns and I would find a shop to replace it for me (and I did). I have a pump and a repair kit in my rig, but I’m not ashamed to admit that I’ll be willing to give a pickup owner $100 to ferry me to a motel and bike shop where I’ll drink a beer and eat a steak while someone else wrestles the tire off of the bike. Worst case, I rent a U-Haul van and drive the bike and me back home, where I’ll put the V-Strom on Craig’s List for parts and be down to the one bike I ride most of the time anyway.

The WR250 fits nicely in the back of the pickup and it makes a terrific errand-running backup vehicle, so I don’t see a near end in sight for me and that bike, but the V-Strom only racked up about 700 miles in the summer of 2015 and I had to make a special effort to do that. The WR250, on the other hand, had about 10,000 more miles on its odometer from all of the Red Wing area explorations I took in our first year in our retirement home and trips to the Cities for last season’s fairly heavy MSF course load. At this point, it’s pretty obvious where my short-term motorcycle ownership and involvement is going. In fact, since I’m now living so close Theilman and the Upper Midwest Trials Association’s home ground, I’ve been looking for a cheap, used trials bike. So far, nothing even close to my budget has appeared, but with a pickup and a camper in our personal inventory that is likely going to be my next and, possibly, last motorcycle purchase. Since trials was my last gasp at off-road motorcycle racing more than 30 years ago, I’m sort of looking forward to closing some of my personal riding loop. 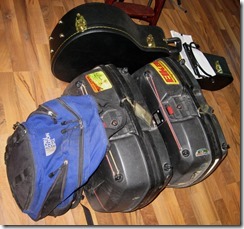 Last summer, I ended up putting off the road trip for an extra day. I didn’t have a schedule to keep, so it’s not like I’d be keeping someone waiting or missing an important date. Scott wasn't going to be on the road for another 5-6 days, because he had family and work stuff delaying his start. I took a few moments to wrap up this essay and cram my side cases full of stuff I probably didn’t need. Somewhere in the house I’d find my sleeping bag. The tent and hammock were packed. The V-Strom is always stocked with tools and emergency stuff. In a couple of hours, the bike would be ready to go. That's about it for "planning" for my motorcycle travel from here out.

Email ThisBlogThis!Share to TwitterShare to FacebookShare to Pinterest
Labels: adventure touring, geezer with a grudge, maintenance