#129 Following Distance and Me

A couple of years ago, there was a young person who took the Basic Rider Course and debated every safety point in the course: helmets and other protective gear, speed, skill development, and traffic management and awareness. Everything we had to say was pointless “safety geek crap.” One morning, I read about that person's death on the highway; unprotected by any reasonable gear, tailgating, capped off by an inability to avoid an obstacle. I recognized the picture in the paper. 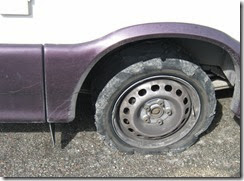 In April, on the road home from New Mexico, I got another reminder of how precarious life on a motorcycle can be; from the relative safety of our motorhome. Before we left our last campsite of the winter, after five months on the road, I did my usual equipment inspection, knocked off the items on the RV’s shutdown checklist, and we headed north toward Des Moines on I35. We stopped in Des Moines for fuel and breakfast and I checked the tires for heat (my lazy man’s tire pressure inspection) at the filling station and took a pressure measurement after breakfast. Less than 2 miles north of Des Moines, the RV started swerving and I heard the unmistakable sound of tire failure. Looking out the rear view mirror, I saw what looked like a fully inflated tire rolling down the center of the freeway behind us. I figured the bike trailer had fried a bearing and tossed a wheel. 250 miles from home, after an 8,500 mile winter. Great, we’re going to be spending a day waiting for AAA to find a repair shop willing to accept their highly “discounted service rates.”

When I got the RV semi-safely parked on the shoulder of the freeway and calmed my wife down, I discovered it wasn’t the trailer tire but the right rear RV tire that had failed. In 50 years of driving everything from heavily loaded band vans and buses to service vans and pickups to the usual assortment of family cars, I’ve never seen a tire failure like this one: the tread completely separated from the sidewalls. It just shucked itself off of the wheel and went on its merry way through heavy northbound freeway traffic. Luckily, it didn't hit anyone and no one hit it while it was in motion. 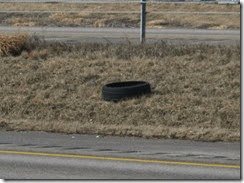 The part that spit off wasn’t heavy, maybe 20 pounds at most, but it was whole and would have made an incredibly difficult-to-absorb object for a motorcycle. Fortunately, it happened on a blustery late March Monday morning, so the usual crowd of Sunday “motorcyclists” were back in their cages and nobody else managed to get tangled up in the tire, either. I found a hole in the traffic and went to pull the shell of the tire from the middle of the road, when a semi clipped it and tossed it against the center island’s guard cables. A few feet higher and the tire would have ended up causing a freak-out in the southbound lane.

What if you had been on a motorcycle following an RV travelling at 60mph on a 70mph freeway? You’re impatient because you’re a typical occasional biker, so you follow closely because you think that will hurry the RV driver along. I, the RV driver, can’t see you at all so you are in no way part of my driving calculations. At 60mph, you are travelling 88 feet per second or, if you are impatient and running up behind me at 70mph you are zipping along at 102 feet per second. Let’s pretend you are a skilled rider, just not a smart skilled rider (a stretch, I know). You’re humping my RV and trailer at about 75 feet, it takes you a second to recognize the object flying your direction and you hit it at full speed. Whatever happens next is completely out of your control.

If we repaint that scenario with you possessing a bit of common sense or good fortune, we'll assume you are 150 feet behind the trailer when the tire comes flying over the wheel well. You still use up that second figuring out what’s about to happen and you nail the brakes, wrapping the tire up between your front wheel and your bike’s frame. Again, whatever happens next is completely out of your control.

On the rare chance that you paid some attention in your last safety class, maybe you’re actually calculating your following distance based on your speed. You gave yourself the recommended four seconds, or 360 to 400 feet, of safe margin and after blowing that first second of reaction time, you have two to three seconds to decide what to do and to get it done. You resist the panic reaction to nail the brakes, make your best guess where the tire is going to go, and swerve to avoid it. Honestly, you could still be in trouble, but once you swerve away from the tire’s path you can still scrub off a lot of speed in the couple of seconds left before the tire arrives at your point of intersection. That could be the difference between getting killed or maimed and just needing to change your underwear.

So, the next time you get all carried away with yourself and feel uppity about your right to speed down the highway unimpeded, you might want to think about where that kind of attitude would put you in the scenario I just described. I know I’ll be thinking about it every time I’m anywhere near an RV or truck. There is a reason those vehicles need high-capacity, high pressure tires and that reason is why you see the carcasses of tires from those vehicles littered all over the highway. The MSF's four seconds of "immediate path" margin is cutting it pretty close when you have a sudden decision to make.