More stuff about this bike 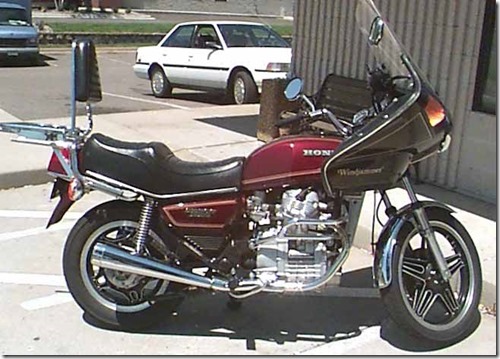 It really irritates me that I don't have a picture of my burgundy CX500 Deluxe. It was my first street bike, since the 1963 Harley Sprint, and I put over 120,000 miles on the bike.

The picture (above) is the right year, color, model, with the same luggage rack, and a Windjammer fairing that weighs almost as much as my current bike. So it will serve for my reminder of this great motorcycle. For what it's worth, I took the picture of this CX500 in June, 2000 in Minnesota (at Bob's Cycle Parts). This Deluxe had about 70,000 miles on the odometer and it was still going strong. If you can't tell from the picture, this CX500 was in beautiful shape.

I bought my 1980 CX500 Deluxe for $800, cash, from a guy who was suffering the after-effects of divorce and needed the cash in the middle of winter, in Omaha, Nebraska, in 1982. You can imagine that he was desperate. The motorcycle market had crashed by 1982 and nobody with any sense buys a motorcycle in Nebraska winters. I was the only prospective buyer he'd had in two months, so I got a great deal. He'd equipped the bike with an extra 200 pounds of chrome crap, which I immediately removed and replaced with the stock stuff. I sold the pile of chrome for $400 to a guy who was building a mini-Goldwing. When I first put the bike on the road, it had less than 1,500 miles on the odometer.

I rode the CX from Omaha to Orange County, California, for my first street bike trip. First, ever, of any length on pavement. In fact, I moved myself from Nebraska to California with what I could carry on that bike. And I carried a lot of stuff in saddlebags, a big Gerry backpack, and a duffle strapped over the tank. On that trip, I rode through fifty mile-an-hour crosswinds and four hundred miles of ice and snow in Kansas and Oklahoma. The fairing kept a little of the snow and ice off of me, although before I turned south in Kansas, I had a 1/2" layer of ice on the north facing (right) side of my rain gear.

Once I got below Lubbock, Texas, the going was a lot easier. On the ride to California, I rode through a thousand miles of plus-110-degree Arizona and western New Mexico heat. The CX's temperature gauge didn't register any of that heat, at all. On the way from New Mexico to San Diego, I picked up two different Harley riders and lost them, as they had to stop for temperature related heat problems. I locked the throttle and cruised up the high desert like it was the easiest thing in the world to do on a motorcycle. It was years afterwards before I really understood how impressive that motorcycle really was.

For the next three years, I rode my CX everywhere, up and down the coast between central Baja Mexico and Oregon. Our bliss was interrupted by a timing chain tensioner failure at about 50,000 miles, which I repaired myself, after first having the job botched by a local Honda dealer's service department. Once that was out of the way, every 8-10,000 miles the bike got new tires. Every 3,000 miles I changed the oil and checked the valve clearances. And I'd have trusted my life to the CX under any conditions.

This being my first street bike and my first real experience on pavement, I owned the CX for a while before taking on passengers. After 30,000 or so miles, my wife and I began to explore southern California on the CX. We rode that little bike, together, from Baja to central California. My daughters joined the adventure a few thousand miles later. When my brother came out from Kansas for a visit, he and I loaded our 390-combined pounds on to the 500 and took the bike to places we'd only seen in movies.

At 126,000 miles, I sold it to a friend who moved himself to Idaho on the bike. He'd have put a few more tens of thousands of miles on it, but he let it sit, unattended, in his garage for a winter and mice turned the wiring into nests. So the bike died an ignoble death at the paws and teeth of vermin.

Email ThisBlogThis!Share to TwitterShare to FacebookShare to Pinterest
Labels: cx500, Honda, my motorcycles